On an average day, more than 100,000 vehicles use the roads, bridges and interchange daily. 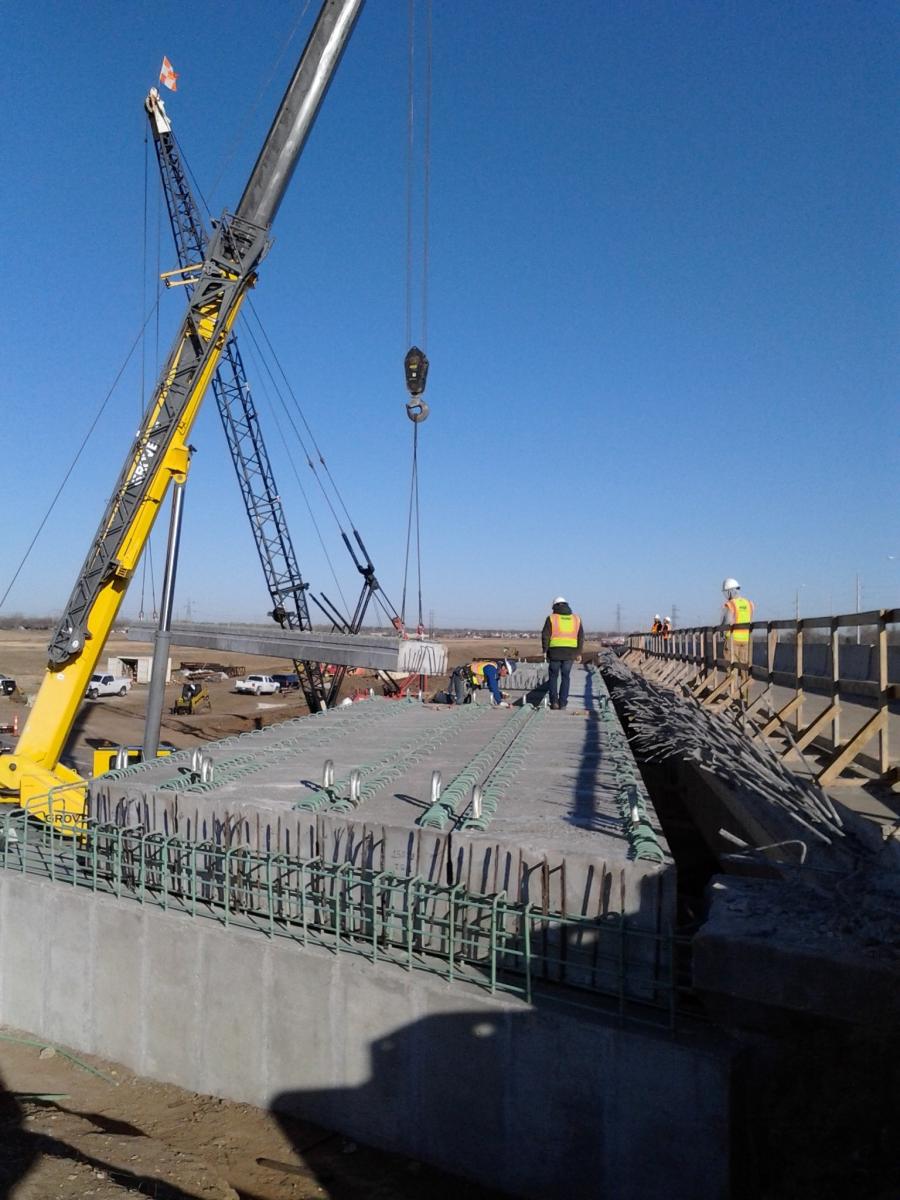 Dondlinger Construction crews began work on the first phase of the Kansas Department of Transportation’s (KDOT) 235 Kellogg Central Project in Wichita, known as the RED Project, on Nov. 10, 2015 and will be delivering the new infrastructure in the summer of 2019.

Dondlinger Construction crews began work on the first phase of the Kansas Department of Transportation's (KDOT) 235 Kellogg Central Project in Wichita, known as the RED Project, on Nov. 10, 2015 and will be delivering the new infrastructure in the summer of 2019.

The $116 million project ($103 million for the construction), funded as part of T-WORKS, is designed to improve traffic and reduce congestion between Interstate 235 and U.S. 54. Fifteen to 20 bridges on the project are being rehabilitated or constructed.

On an average day, more than 100,000 vehicles use the roads, bridges and interchange daily. The new infrastructure will be able to handle significantly more vehicles and meet traffic needs for many years.

The work is needed because a study completed in 2007 identified safety and operational problems with the I-235 interchanges at Kellogg Avenue and Central Avenue. Upgrades for the area had been discussed by KDOT since the late 1990s.

“Geometric improvements to these interchanges to safely and efficiently accommodate current and projected traffic volumes are the primary reason for the project,” according to the website. “The study identified safety and operational problems with the I-235 interchanges at Kellogg Avenue and Central Avenue, including a four-level directional interchange for I-235 and Kellogg Avenue and a tight diamond interchange for I-235 and Central Avenue connected with auxiliary lanes along I-235.

Due to the size of the project, it is being constructed in phases. The first phase contract covers a partial reconstruction of the I-235 and Kellogg Avenue interchange and will greatly improve the safety and operational issues currently experienced at this location. The work includes the flyover ramps from northbound 235 to westbound Kellogg and southbound 235 to Eastbound Kellogg; upgrades to the West Street interchange, which is currently a diamond interchange with a Texas turnaround on the west side of the interchange; additional lanes on 235 between Kellogg and Central; and a tight loop ramp in the southeast quadrant is being reconstructed.

Future phases for the project are being planned.

Areas of potential right-of-way have been identified along the entire project, which include some businesses and residences.

“All the right-of-way was not acquired before the project began,” said Don Snyder, KDOT's Wichita Metro Engineer, “and we believe that all the right-of-way has been acquired. There is one hotel parcel in the northeast quadrant at U.S. 54 and West Street that went through a condemnation procedure. After the property was acquired, they had to redesign the exit ramp from WB 54 to West Street, which was extra work for KDOT's designers and the consultant designer.”

The public was consulted on various occasions, including public meetings and five community advisory committee meetings (CAC) that brought together neighborhood leaders, business leaders, property owners and residents of the study area. District advisory board meetings also were held and the Wichita Area Metropolitan Planning Organization was consulted. Participation was important because the study relates to the greater metropolitan transportation network.

Snyder recognizes that the project is creating traffic problems, but that the community will appreciate the work when it is completed.

“The current interchange at 235 and 54 is an antiquated design from the late 1950s and early 1960s that has tight cloverleaf ramps in the center and no merging room at the top for EB Kellogg to get on and the NB 235 traffic to get off,” said Snyder. “It's a very tight merging and weaving area. Most of the major traffic concerns will be addressed with this current project.

“For local businesses,” he said, “we caused some inconveniences, but we're dealing with those problems as they come up.”

Construction crews are busy on several fronts — the bridges from NB 235 to EB Kellogg, a new bridge from SB 235 to WB Kellogg, a bridge on SB 235 over Maple Street, the EB Kellogg bridge over West Street and the reconstruction of the four ramps from West Street.

“The two entrance ramps to EB and WB Kellogg are closed for the reconstruction and they should be re-opened in the summer,” said Snyder. “This is a major project and none of the ramps have been completed to where we can open them up to traffic.”

Utility conflicts are affecting the project and are being dealt with.

“We had to move a major Westar Energy electrical transmission line,” said Snyder. “That was mostly completed before the project started. “It was a very costly procedure and when the project began, Dondlinger realized that the new location of the overhead power line was in conflict with construction on one of the bridges. The line had to be temporarily de-energized so they could construct one of the piers. There's a number of other service and electrical lines that have been in conflict with different phases of the construction that we have successfully worked through.

“We have a good contractor to work with,” he said. “We've worked with Dondlinger on a lot of projects and they are a local Wichita contractor. We're familiar with them and they are pretty good to work with. The work is on schedule and we're getting great weather. Everything is going great.”

On an average day there are between 50 to 60 construction workers and personnel on site.

Dondlinger expects to remove a fair amount of concrete, rebar, asphalt and earth during the work — the amounts are still being tabulated as the work proceeds, as will the amount of material that can be recycled. It is a similar situation for the materials to be brought in over the next few years.

Dondlinger's field office is located a few miles away from the work — it had been used for another KDOT project completed two years ago. An old railroad corridor that ran parallel to 54 on the south side is being used as a staging area for the equipment and on the west side of the project, land that is adjacent to the Wichita Valley Center Floodway Canal is being used to store materials.

The equipment being used includes a variety of cranes, dozers, backhoes, excavators, dump trucks and other standard vehicles and equipment.

The mild winter, which included many 60 degree days in January and February, allowed Dondlinger crews to work through the season.

KDOT management personnel, including project manager Earl Bartlett, are in daily communication with the Dondlinger project manager Mark Wisner and his staff, and bi-weekly meetings are held to review what was done and what is being planned.

“We worked with Dondlinger on two previous large scale projects and it's the same personnel and KDOT and Dondlinger project managers,” said Snyder. “We have five years experience of working together. Matt Inlow, Dondlinger's office project manager, is our primary contact for design and construction issues.

“There are always issues on a project of this scope that you cannot anticipate,” he said, “but as far as the design goes, the plans are almost 2,000 pages long — about 10 volumes. It's hard for the designers to anticipate everything, but TranSystems [based in Kansas City, Missouri] are pretty good to work with and they work through design issues that arise during the construction.”