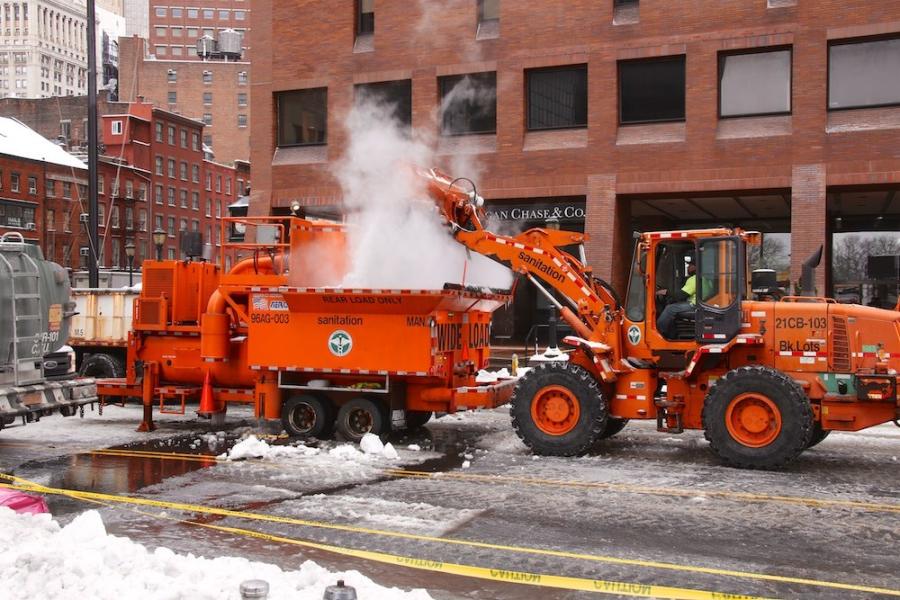 “We have 31 melters that we use during major storms, to melt snow in dense areas with narrow streets where piles of snow could become a safety issue,” said Vincent Gragnani, press secretary, NYC Department of Sanitation (DSNY). (DSNY photo)

Municipal ice melting techniques are varied, and different regional and state departments of transportation have fine-tuned their approach to include a combination of methods and materials depending on the amount of ice and snow their areas experience every winter. Solutions have included using salt, brine, calcium chloride, magnesium chloride and a few other alternatives, along with sand application for traction. 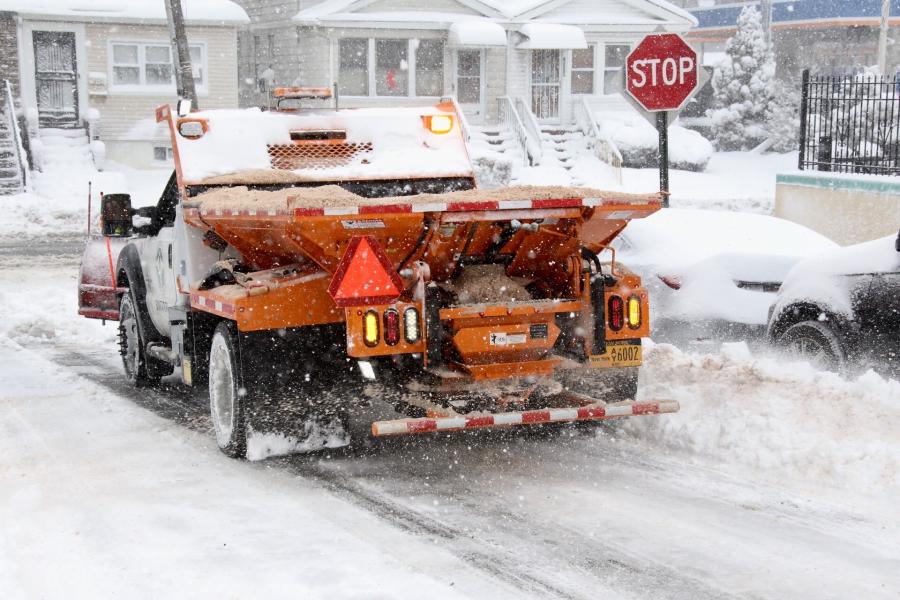 Salt has by far been the most used given its low cost and abundance, though the corrosion and contamination in the long term are cause for concern. But crews and technology have improved over the years to ensure effective results with lesser materials, better application using the latest equipment and more environmental awareness among teams.

Where other materials might lead to lesser corrosion and contamination, the availability and cost effectiveness has been a matter of debate. Nonetheless, using methods such as pre-wetting, de-icing and anti-icing alongside have helped DOT crews combat some of the most intense winter weather in recent years.

"We have 31 melters that we use during major storms, to melt snow in dense areas with narrow streets where piles of snow could become a safety issue," said Vincent Gragnani, press secretary, NYC Department of Sanitation (DSNY). "We work with the city's Department of Environmental Protection to identify sewers that can accommodate large amounts of melted snow."

DSNY clears snow and ice from New York City's more than 19,000 lane-mi. of roadways and uses salt and brine to keep streets safer in winter storms. Salt spreaders are the first line of defense, used before a storm begins. Spreaders are loaded with a mix of rock salt and calcium chloride and pre-positioned to begin spreading at the first sign of frozen precipitation. While rock salt begins to lose effectiveness once temperatures dip below 24 F, the added calcium chloride increases the salt's effectiveness, even at low temperatures. Depending upon conditions, some locations that are more prone to earlier freezing may be pre-treated.

"In 2019, we piloted the use of liquid salt brine, which reduces the adhesion of snow and ice to the pavement, which can suppress snowfall accumulation, increase the effectiveness of DSNY's plowing operations and provide greater traction to motorists," said Gragnani. "When weather conditions permit, we pre-treat some roadways — entrances and exit ramps of major highways and other challenging locations — up to 24 hours in advance of a snowstorm. We have an anti-icing fleet of 30 vehicles, as well as seven brine storage tanks citywide, storing 9,800 gallons each, for a citywide total of 68,600 gallons."

Pre-treating with liquid deicers has been practiced at Ohio DOT for quite some time now, Matt Bruning, press secretary, ODOT Central Office, said.

"We're now increasing our application of liquid deicer on roadways during and after a snow event. The application rates can be as much at 80 gallons per lane mile, which is the equivalent of approximately 184 pounds of salt." 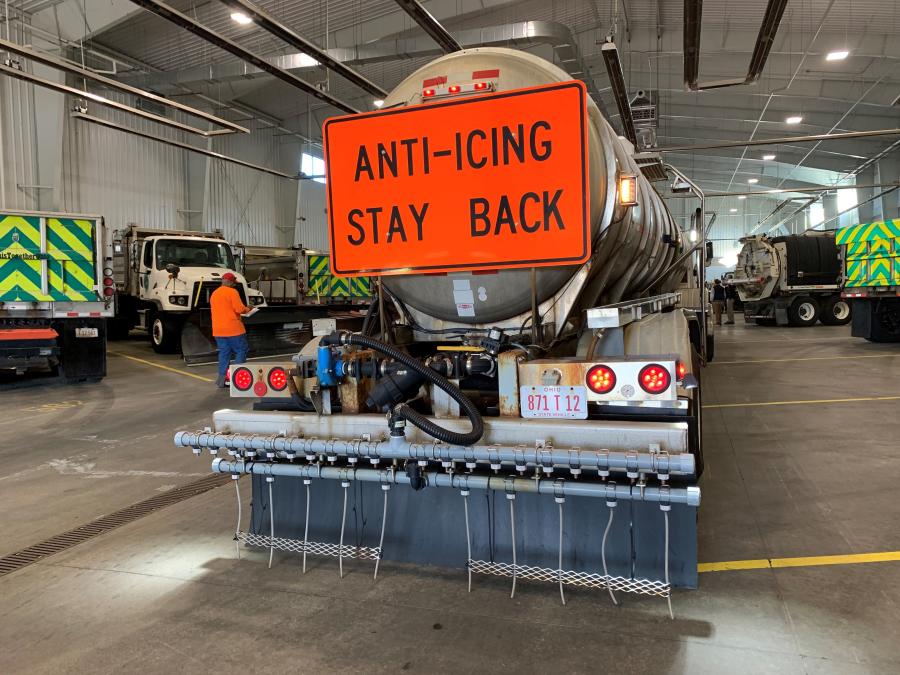 The advantage of using liquids is it works faster and does not have the "bounce and scatter" as with rock salt applications. There is little waste, which helps the environment while saving costs.

"It also allows us to remove the snow and ice faster, thus reducing the number of cycles we have to travel," said Bruning. "If we can keep the snow from bonding to the roadway, as soon as the snow stops falling and the winds are not blowing drifting snow, roads will be clear. The only drawback is maintaining a two-hour cycle time during the storm, which includes loading materials. If you cannot maintain the cycle time, you need to shorten your route distance or have a follow truck applying rock salt."

ODOT has found that using semi-tankers is one of the best practices for application. A case study in northwest Ohio showed an average cost savings of 27.2 percent and dramatic reduction in post-storm cleanup time.

Pre-treating and de-icing also are common at Tennessee DOT.

"Whenever a wintry precipitation storm event is forecasted and one inch or less of rain is predicted prior to the wintry precipitation falls, we pre-treat roadways using a 23.3 percent salt brine [mixed with 10 percent calcium chloride] spread at 35 to 40 gallons per lane mile," said Beth Emmons, director of community relations division. "If there is one inch or greater rain forecasted, we will spread rock salt at a rate of 100 pounds per lane mile as a pre-treatment. During the storm event we continue to utilize the same brine mixture or spread rock salt at rates ranging from 250 to 400 pounds per lane mile depending on storm severity. Once temperatures drop below 25 degrees, we pre-wet the salt with calcium chloride at the spreader. Once a quarter-inch of wintry precipitation has accumulated on the roadway, we will plow to remove the precipitation by mechanical means."

While solid salt, liquid deicer, sand and snowplows are all used by Oregon DOT depending on the winter weather experienced, Katherine Benenati, assistant communications director said, the goal is to maximize safety while minimizing the environmental effects each of the different winter toolbox tools can cause.

"Liquid magnesium chloride with corrosion inhibitor has proven to be an effective way to provide reasonably safe road surfaces in winter conditions. It is used before and during a storm to prevent ice and snow from bonding to the pavement."

She added, "We use the lowest application rate at the right time and place to achieve the desired road conditions. To protect water quality, we only use deicers that meet strict quality specifications."

When deicers are not cost effective (dependent on a variety of environmental and pavement variables), ODOT uses sanding material for better traction while driving.

"We use sand only when and where appropriate," she said. "We try to avoid applying sand to bare pavement to avoid bounce and scatter. We often pre-wet sanding material with liquid deicer to help it stay where we placed it and we place barriers to capture scattered sand along sensitive waterways." 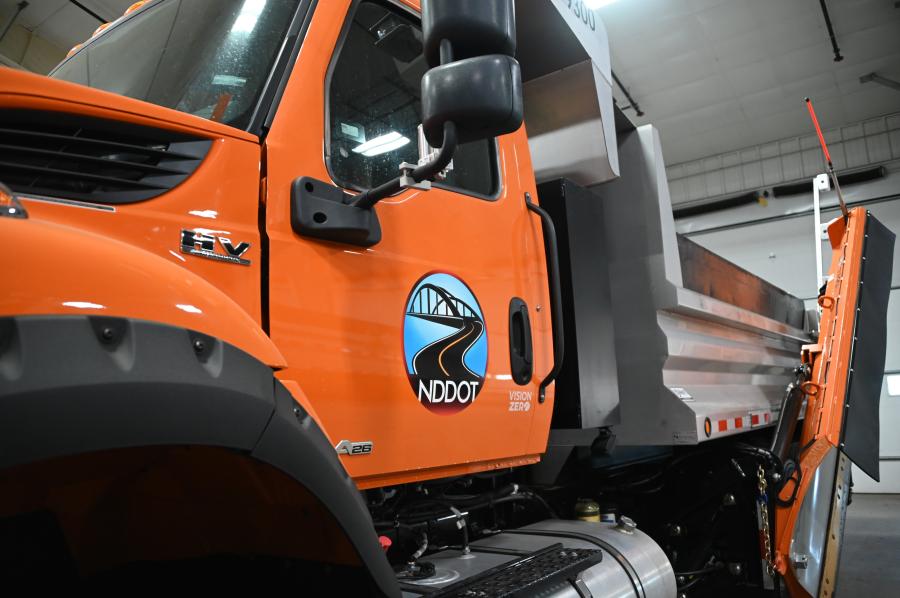 Some crews have experimented locally with agricultural byproducts as an effective solution that is inexpensive, environmentally safe and less corrosive in nature. For instance, North Dakota DOT has added BEET 55 as part of its arsenal for snow and ice control, aside from salt and salt brine. BEET 55 is an agricultural product derived from sugar beets that is blended with salt brine (80/20 ratio of salt brine to BEET 55).

"We have been increasing our usage of liquids for snow and ice control," said Barry Kinnischtzke, NDDOT maintenance division. "We have increased the amount of liquid storage and the number of tanks on snowplow trucks as a result. The pre-wetting of salt has been used to help prevent bounce and scatter of salt. Pre-wet salt activates quicker than dry salt. Slurry [super-saturated salt] also has been tried and used as a super wet de-icing material. We ensure that the correct amount of salt is applied to the roadway. We try to get no more and no less than the amount of salt needed to effectively treat the roadway and leave no residuals." CEG