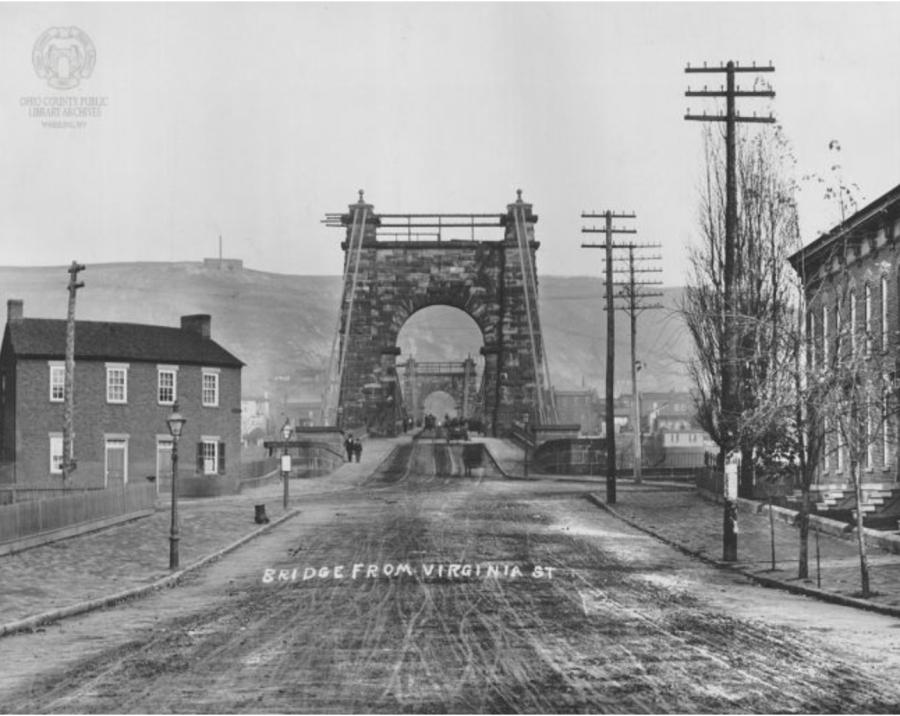 The Wheeling Suspension Bridge was constructed in 1849 — 12 years before the start of the Civil War — and was listed on the National Register of Historic Places in 1980. (W.C. Brown photo courtesy of Ohio County Public Library)

The Wheeling Suspension Bridge in West Virginia continues to get much-needed repairs, but whether that care will lead to it reopening to vehicle traffic remains to be seen.

The work is one of two downtown projects happening in the Ohio River city's downtown designed to upgrade the bridge, beautify the city, and make both safer and more pleasing for residents and visitors alike.

On Aug. 9, Gov. Jim Justice announced he had approved a $31.9 million bid for Wheeling's long-awaited streetscape project to improve the look of the city's downtown.

At the bridge site, West Virginia Division of Highways (DOH) District 6 Engineer Tony Clark said it is still too soon to tell if the 173-year-old river bridge will be reopened for drivers to use again.

"That decision has not been made that I'm aware of," he told the Wheeling Intelligencer & News-Register. "I believe the plan was to kind of evaluate it as it's being opened up to see more of the deficiencies that couldn't be seen on the surface."

Earlier in August, Advantage Steel & Construction of Saxonburg, Pa., the contractor on the $17 million job, drilled down to provide more stability for the main cables on the northeast side of the bridge on Main Street.

"They're [doing so] to install steel piling and rock anchors to shore it up, [and] to provide more anchorage for the suspension cables," Clark said.

The drilling is being carried out at a single, weak spot on the bridge, and not part of the structure's main anchorage, he explained. Once that is completed, the cables will tie into the piling.

Meanwhile, a repainting of the Wheeling Suspension Bridge also is continuing by crews from 446 Painting LLC in Canonsburg, Pa., with many people taking notice of the bold red hue the firm is adding onto the structure's southside. In addition, the bridge cables still must be repainted white.

Clark noted that 446 Painting hopes to complete its work on the 1,300-ft. bridge this year, although it may take until 2023's construction season, depending on the weather and other factors.

New signage also is planned, along with the installation of new lighting.

"The electrical subcontractor is removing the existing lighting from the bridge to do the lighting upgrade," he said.

Incredibly, the Wheeling Suspension Bridge was constructed in 1849 — 12 years before the start of the Civil War — and was listed on the National Register of Historic Places in 1980.

When the span was open to vehicle traffic it had a two-ton weight limit. In recent years it has closed temporarily at various times because of damage caused by oversized vehicles traveling on it, the Intelligencer & News-Register noted.

Throughout its history, some of the support cables have snapped as well, forcing more bridge closures. Finally, in September 2019, it was closed to all vehicle traffic after an overweight commercial bus damaged a barrier on the structure.

Until then, it had been the oldest suspension bridge still in continuous use in the United States.

While the work continues, one walkway on the bridge has remained open to allow pedestrians to walk across the bridge, which spans the Ohio River between Wheeling Island and downtown Wheeling.

While speaking with reporters at the State Capitol Building in Charleston on Aug. 9, Gov. Justice praised the Downtown Wheeling Streetscape project, saying that long-delayed project will help the Friendly City to grow.

"We're finally getting the ball rolling on a project that's really dear to my heart," he noted. "It's taken too long, but there's been lots of changes as we got into this."

St. Albans-based Triton Construction Inc. was awarded the bid for the streetscape project at $31.9 million — $1.9 million above the estimated $30 million cost for the project that will make the area between 10th and 16th streets compliant with the Americans with Disabilities Act (ADA) and resurface Main and Market streets.

The Wheeling news source reported the construction also involves creating curb cuts, widening sidewalks and installing decorative brickwork. When completed, it will have added new streetlights, trees and planters too.

Funding for the work also includes $1.9 million from the city of Wheeling, and $16.3 million that the West Virginia Department of Transportation (WVDOT) was awarded from the federal Rebuilding American Infrastructure with Sustainability and Equity (RAISE) grant program.

Justice added that another $100,000 will go toward the design and engineering work.

Wheeling officials have been pushing for the project since 2015 and needed the state's participation since the streets in question are part of W.Va. Highway 2. Justice first expressed support for the project in 2020.

Construction on the streetscape is slated to start this fall with final completion scheduled for 2024.

"This is a transformational project that our community has been working toward and anticipating for several years," Wheeling City Manager Robert Herron told the Intelligencer & News-Register. "The work of the [state DOH] — with assistance from city staff — has been complicated, detailed, and, quite frankly, extraordinary. The end result will be a wonderful project that will have been worth the wait."

The Wheeling Streetscape was one of six projects put out to bid by WVDOT at the end of July. The others included road striping in Fayette, Greenbrier, Monroe, Nicholas, Summers, McDowell, Mercer, Raleigh and Wyoming counties; Interstate 64 paving between the MacCorkle Avenue and Oakwood Road exits in Kanawha County; a high-friction pavement project on Talbott Hill in Barbour County; and paving between Cheat Lake and Coopers Rock in Monongalia County.

Manchin and Capito are both members of the Senate Appropriations Committee.