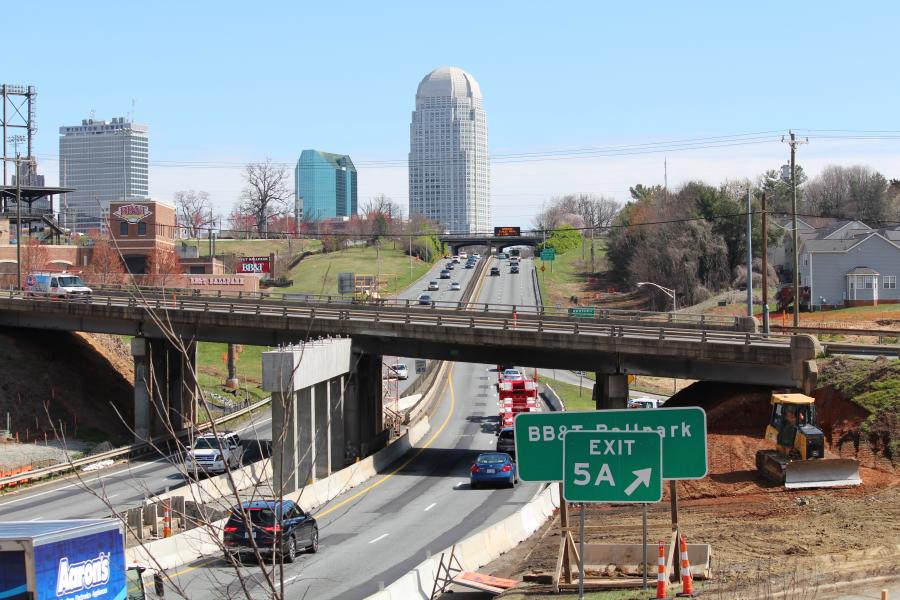 Winston-Salem, N.C., has been undergoing a major transformation for 25 years.

Once known primarily as home to one of the world's largest manufacturers of cigarettes and other tobacco products, this dynamic mid-size city of 243,000 people is now regarded more for being a center of emerging technologies and a home to one of the South's most exciting and diverse arts communities.

Within the last 15 years, downtown Winston-Salem has been upgraded significantly with new buildings going up and old ones getting much-needed makeovers. Thoughtful efforts have been successful in luring shops and restaurants back to the area. In addition, new apartment and condo structures have been built or are underway and with them have come more people moving around the downtown.

Nearby, a picturesque baseball stadium was built next to U.S. 421/Business 40, the city's main east-west freeway since its construction in 1958 (it was the first section of interstate highway designated in North Carolina).

At about the same time as Winston-Salem was beginning to remake itself, Business 40 — as it is commonly known — lost its interstate designation in 1993 when I-40 was rerouted to the then south edge of town. Traffic declined as Business 40 became a thoroughfare used primarily by locals wanting to get to work downtown or by folks trying to reach Wake Forest Baptist Medical Center, the large regional health complex just west of downtown.

Although no longer an interstate, though, Business 40, along with several of its interchanges and bridges, could not hold off deterioration due to age and outdated design standards, as well as increasing traffic volumes and accidents.

A Modern Makeover Under Way

Now, after decades of talking about an upgrade to Business 40, including first announcing a long-term solution in 2006, the state has finally begun rehabilitation on a 1.2-mi.-long stretch of the roadway from west of Fourth Street to just east of Church Street — right in the heart of downtown.

The Business 40 Improvement Project is taking place within the shadow of Winston-Salem's tallest buildings, as well as BB&T Field, WFU Baptist Hospital, Old Salem and the city's new Wake Forest Innovation Quarter, a more than $700 million technology and biomedical research complex on the site of what used to be old tobacco factories.

The Business 40 project has a projected completed date of Nov. 1, 2020, according to Miracle King, a spokesperson for the NCDOT. At that time, Business 40 will be renamed Salem Parkway.

A Two-Year Closure Ahead

Despite its relatively short distance, the job is a complex one that will cost just over $99 million.

Then there is the fact that the construction also will mean completely closing Business 40 through the work site this fall for almost two years, a prospect that strikes dread into the heart of many motorists who use the road regularly.

However, the NCDOT and the city have worked hard to reassure drivers that there are plenty of detours planned into and around the downtown once construction becomes heaviest and the freeway shuts down later this year. The state agency also has asked motorists to factor in an additional 20 minutes into their daily commutes downtown.

The two-year closure was deemed by NCDOT as a more palatable choice for commuters than the alternate six-year-long partial closure in the original design.

A Lot to Build and Replace 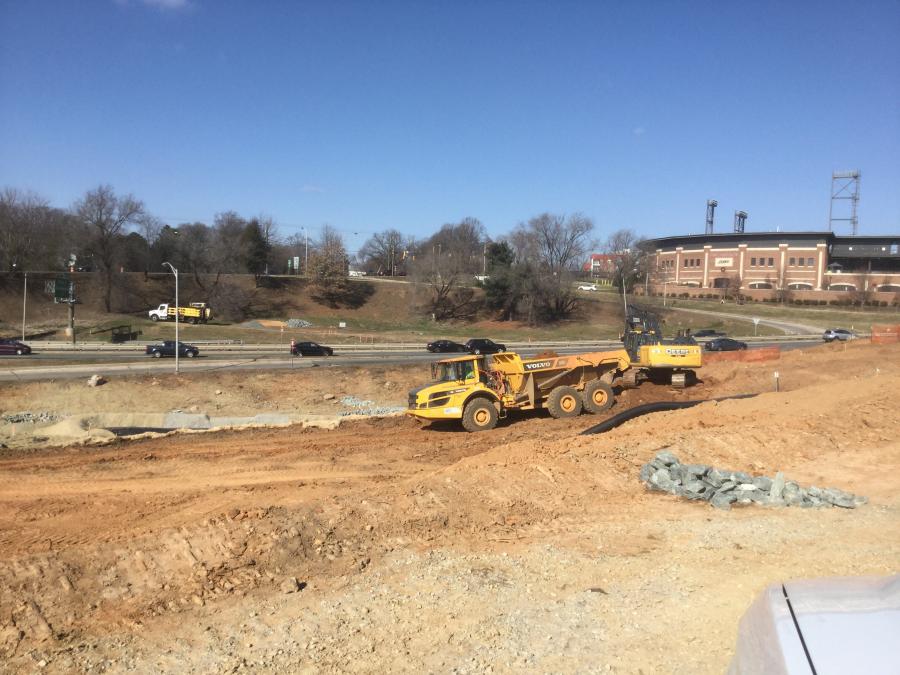 A pedestrian structure at Green Street will replace a vehicular bridge that has been closed for several years after it was damaged by a big rig traveling along Business 40. The new bridge will give baseball fans a safe way to cross Business 40 to reach BB&T Field, home to Winston-Salem's minor-league team.

The builders also will redo and add onto portions of a multi-use path, known as the Strollway, from Lockland Avenue north to Liberty Street and build a pedestrian bridge over the freeway.

Once the work is finished and the roadway opened, the speed limit along the improved freeway will be increased to 55 mi. per hour.

Construction began last June with the installation of a new waterline along First Street that will allow the removal of all the waterlines currently attached to the bridges being replaced.

The work is being built in sections, with Segment A having begun last October at and around the freeway's intersection with Peters Creek Parkway.

“Right now, the contractor is working on grading and drainage systems for the new Peters Creek Parkway interchange,” said Mezak Tucker, PE, resident engineer of Division 9 of the NCDOT. “Crews are also starting Phase 1 of the new Peters Creek Parkway bridge, as well as the pedestrian tunnel under the Parkway, grading and drainage systems for nearby Apple and Gregory streets, the First Street waterline, and the Fourth Street bridge retaining walls.”

Tucker said that plans call for the Segment A work to include the widening of Peters Creek Parkway from two to three lanes in each direction with new ramps and loops to Business 40, replacement of the Fourth Street Bridge, and construction of nine retaining walls at various locations throughout the segment.

The work on Segment A is scheduled for completion this fall, according to the NCDOT.

This summer, work will begin on Segment D to improve small areas along Martin Luther King Boulevard, just north of the main Business 40 project; and at Academy Street, just south of the freeway.

“When that begins, you will see the contractors extending the two lanes in each direction of MLK Boulevard from Trade Street to Cherry and Marshall streets,” Tucker said. “Over along Academy, they will widen the street at Peters Creek Parkway to accommodate turn lanes and signal improvements to improve the level of service.”

The MLK Boulevard and Academy Street improvements are both being done, Tucker said, to mitigate the anticipated increase in traffic once Business 40 is closed.

Apple and Gregory streets are being realigned to the southeast to avoid the new loop and ramp being built at Business 40 and Peters Creek Parkway.

As the first part of the Business 40 Improvement project is finished late this year, Segment C will begin construction with the replacement of the bridges at Liberty, Main and Church streets, plus the building of the Strollway bridge. Work also will progress on rebuilding the grade and replacing the pavement on Business 40.

Next year's work schedule, continuing through most of 2020, should be very busy, said the NCDOT's Miracle King, with the building of the pedestrian bridge on Green Street, replacing the Broad Street bridge and removing its ramps to and from Business 40, and shortening the freeway's overpass at Brookstown Avenue.

Crews also will modify the ramp at High Street, remove the Spruce Street bridge, and replace the Marshall and Cherry Street bridges, while also redoing their ramps to create a new interchange using both streets.

While everything else is going on, the much-needed improvement of the pavement along Business 40 will be ongoing until the new Salem Parkway is ready to be opened in November 2020.

“Even though there will not be any additional through-lanes on Business 40, the project will include paved shoulders, concrete median barriers, a reduced number of ramps and increased weave-distances between the remaining ramps,” said Pat Ivey, PE, NCDOT Division 9 engineer. “These new elements will help improve safety and increase the capacity of the road.”

Men and Machines in a Tight Space 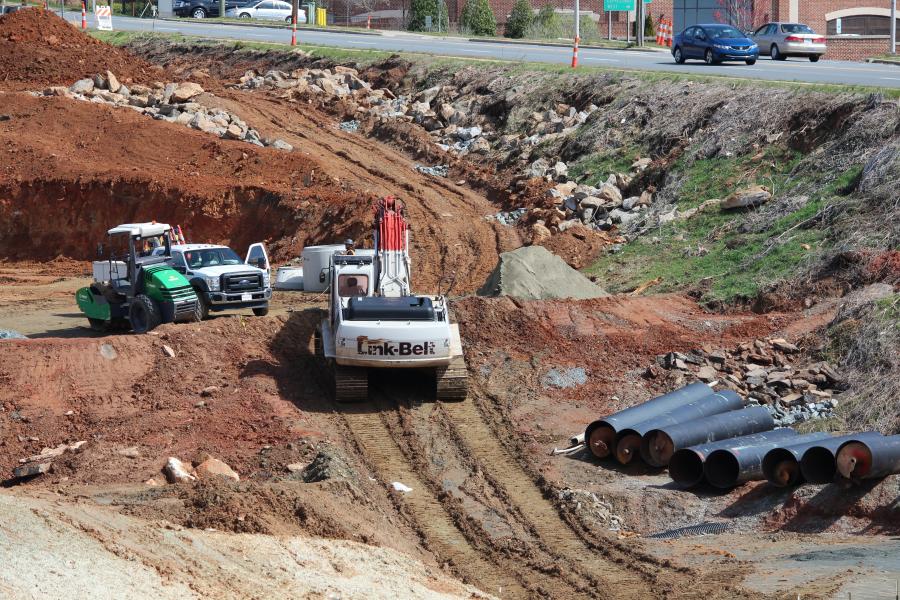 Ivey's colleague, Mezak Tucker, said he estimates a few hundred people will work at the job site over the course of the three-year project.

“The biggest challenges that the contractor's crews will face is the accelerated work schedule and the constraints of the work area,” he said. “In order to meet the milestones of the schedule the crews will be working extended hours, weekends, and even nights.

“Also, with this project being extremely urban, the right-of-way and construction easements don't allow much room to operate some of the larger equipment or to store the needed materials, meaning that careful planning was put in place before we stepped onto the site.”

As the project is still in the early phases of its construction, most of the current work is erosion control, rough grading, and storm-drain installation. The entire job calls for 170,000-cu.-yds. of unclassified excavation and 130,000-cu.-yds. of borrow, said Wright Archer III, PE, division construction engineer of the NCDOT's Division 9.

He identified some of the equipment currently on site to include various-sized excavators, among them a Bobcat E50, a JCB 85Z, a Kobelco SK210 and a Cat 336E. Bulldozers working on Business 40 include a Deere 450JLGP and a Komatsu D61. As far as wheel loaders, a Deere 524K and a Komatsu WA380 are moving around the work zone.

Currently, Wright said there is only one crane on the project, a Grove RT765E-2 supplied by Crane and Rigging Corp.

Flatiron-Blythe is using some of its own equipment, he said, but most of the machinery is leased. Sunbelt, Herc, United, Volvo, James River, Linder Equipment, Carolina Cat, Crane and Rigging Corp. all have equipment operating on the Business 40 Improvement project.