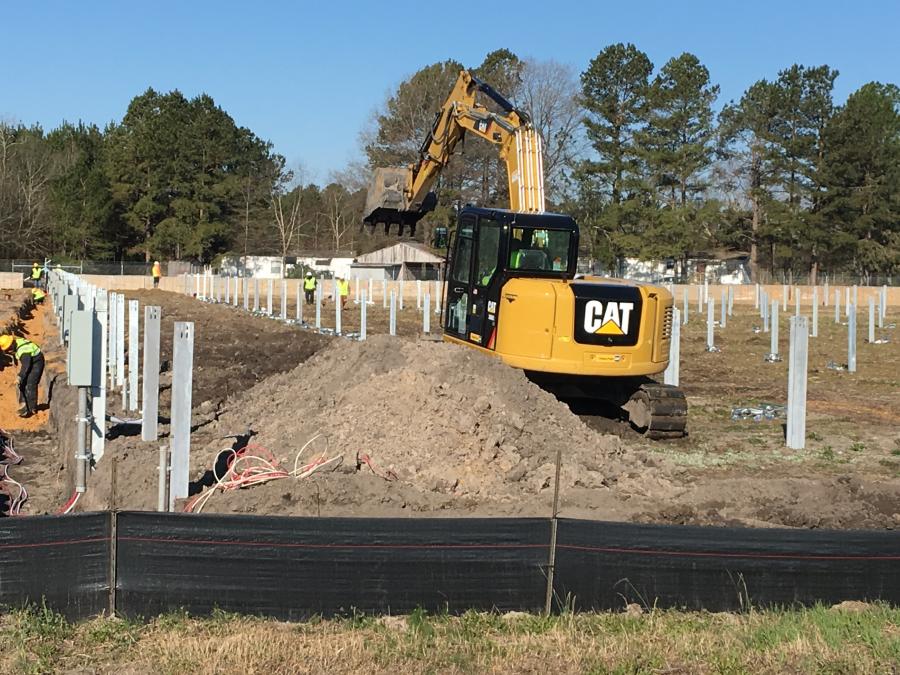 The company is using its fleet of Caterpillar equipment to complete the work, including Cat 308 excavators and Cat 305.5 excavators as well as Cat 299 skid steers, all of which were purchased from Gregory Poole Equipment Company.

Tim Sealey and Thomas Horne founded the company after working for various other utility companies.

“They learned a lot about the industry by working for other companies, and saw the need to target directional drilling and make the process more precise,” said Brantley Turner, co-owner of DSI. “When they were training on directional drills, they had the ability to see things that would enable them to drill faster and more effectively. By doing more prep work in terms of job management, locating processes and tracing to minimize accidents, they knew they would have a better product.

“Tim and Thomas came to work for me in 2008. I was the operations manager of Mastec at the time, and they were a 3rd Tier subcontractor on projects at Fort Bragg. Mastec had the contract, and they quickly excelled to be my prime subcontractor at Ft. Bragg.”

In 2011, Turner said the duo approached him to get his utility license, because without one, the company could not operate as a prime contractor on utility projects.

“I hung my license at DSI, and later I obtained ownership at DSI, allowing us to branch out and bid different contracts,” said Turner.

During the early years, DSI was the subcontractor on natural gas projects and water and sewer line projects; however, Turner said that as they gained more experience, they were able to branch out and diversify to larger projects.

“We have done everything from Interstate I-295 utility construction — rerouting all of the power lines there. We directional bored inter coastal waterways for communication. We've done fiber-optic replacement after hurricanes, after they washed away with the rail road tracks. So we did some storm restoration work.”

In 2014, with the addition of co-owner Justin Keck, the company has expanded its solar farm construction division. Keck brought his own area of expertise in commercial and industrial electrical after successfully starting and merging his company with DSI. That merger enabled DSI to offer full turn key electrical services.

The solar division began as a partnership with FLS Energy, which was recently acquired by CCR. Today, the company builds anywhere from 5-megawatt to 100-megawatt farms. The company is currently working on a 500-acre, 92-megawatt solar farm on County Line Road in Cumberland County, N.C.

“The 100-megawatt farm we're working on now will probably take eight months, while a 5-megawatt farm can take just 12 weeks. It just depends on the size job, and type of system it is.”

For the company's current projects, DSI will be completing underground and above ground electrical work. This involves digging and backfilling trenches and burying conduits raceways and conductors. The company is using its fleet of Caterpillar equipment to complete the work, including Cat 308 excavators and Cat 305.5 excavators as well as Cat 299 skid steers all of which were purchased from Gregory Poole Equipment Company.

Turner said the reliability, speed and responsive hydraulics sold the company on the machines. He also had high praise for his dealer, Gregory Poole Equipment Company, which is based in North Carolina.

“Everything has been top notch. Parts have been on the shelf, as promised. If they don't have it, they will get it overnight, but it's not an expense to us,” Turner said.

He said Gregory Poole Equipment Company also has come through for them on a recent solar project on Roslyn Farms Rd. “North Carolina's largest solar farm to date.”

“It was muddy, and we had 30 inches of rain in over two weeks. We needed to rent a Hydrema articulated dump truck, and Marcus Daniels, our salesman, found one. He thought it was going to be two months before one came off lease. Within two days, he came up with one. It really sped us up,” Turner said.

In addition to its current solar farm projects, the company is completing utility work from the coast to Charlotte to Raleigh. The directional boring work takes the company to Georgia, South Carolina and various areas in North Carolina. In addition, commercial electrical work has taken the company to Florida, Ohio and Texas, among other states.

“We are kind of unique,” said Turner. “We can do it all. We don't have to sub anything out. Our people are the core of Directional Services. We have a group of people who are willing to work and give the level of detail that is required for us to stay successful and viable in the industry. I think that is one of the core things for Directional Services.”