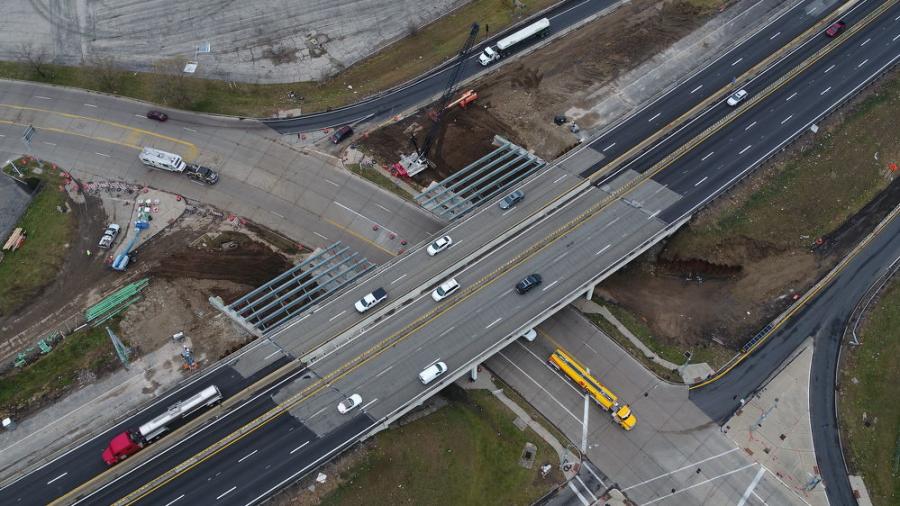 The project encompasses repairing the two bridges on I-75. Interstate 75 is a major north-south interstate highway bisecting the country from southern Florida for 1,786.47 mi. up to the northeastern point on the Upper Peninsula of Michigan, making it one of the longest in the United States, as it passes through six states.

Nothing lasts forever. When the Ohio Department of Transportation (ODOT) conducted routine inspections of the bridge decks and surface of Interstate 75 over Edwin C. Moses Boulevard and Carillon Boulevard near the Great Miami River in Dayton, Ohio, they concluded that the bridge decks built in 1963 had reached the end of their useful design life. ODOT rated them "poor." 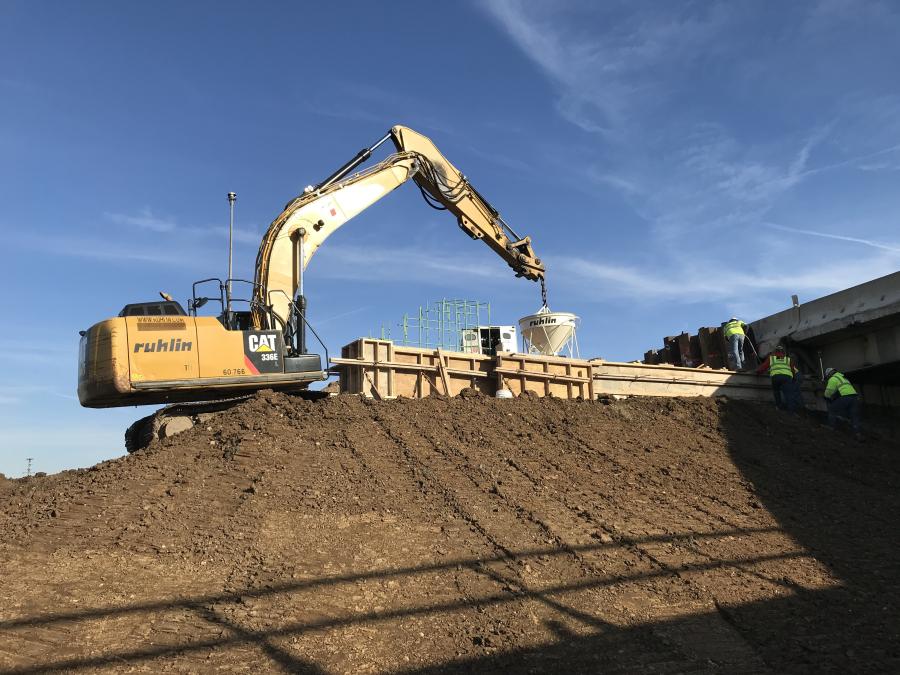 To bring them up to date, ODOT awarded an $18.8 million contract to the Ruhlin Company, an employee-owned general contractor based in Sharon Center, Ohio. Founded by John G. Ruhlin in 1915, the company served as general contractor in the commercial and industrial markets in northeastern Ohio before expanding in 1955 to the civil market, where work included bridge and road construction and water and sewer treatment facilities. A structural division was added in 2006 to complement its heavy civil division.

The project encompasses repairing the two bridges on I-75. Interstate 75 is a major north-south interstate highway bisecting the country from southern Florida for 1,786.47 mi. up to the northeastern point on the Upper Peninsula of Michigan, making it one of the longest in the United States, as it passes through six states. Construction on it started in 1957, but the bridges in Dayton were built in the early 1960s.

"The U-turn was installed to facilitate the modernization of I-75 projects and the U.S. 35/I-75 interchange projects to the north," Oliphant explained. 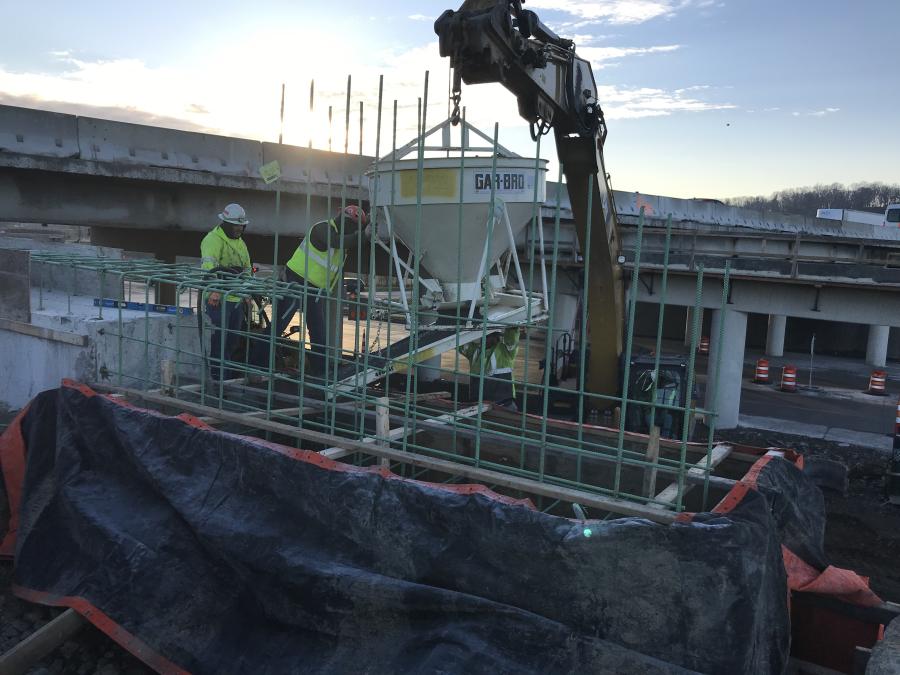 Both are complete, except for the last phase of U.S. 35/I-75 Interchange. Since the projects it was intended to assist are complete and because reconstruction of I-75 over Edwin C Moses structure will conflict with the U-turn, the U-turn lane will be taken out.

"They also shifted the far-left lane of I-75 southbound [contraflow] onto I-75 northbound between Stewart Street and S.R. 741 [Springboro Pike]," Oliphant said.

Traffic pattern shifts, ramp closures and lane restrictions in each direction of I-75, as well as the resulting delays, are expected to last for the duration of the project. Lane changes are expected to end this year.

Oliphant said, "Early in the project, Ruhlin and ODOT hosted a meeting with community members, including local towing companies, hospitals, Dayton Public Schools, the University of Dayton and Montgomery County Sherriff's Department, to explain how the project would impact traffic and provide time frames for the various phases of work."

According to Oliphant, the majority of the excavation for this project is required at both bridge abutments.

"Excavation is being performed with a Cat 336 excavator," she said, estimating that approximately 2,000 cu. yds. of material will be moved.

In addition to the excavation, approximately 5,500 cu. yds. of material will be moved to construct a causeway into the Great Miami River to provide access for equipment. 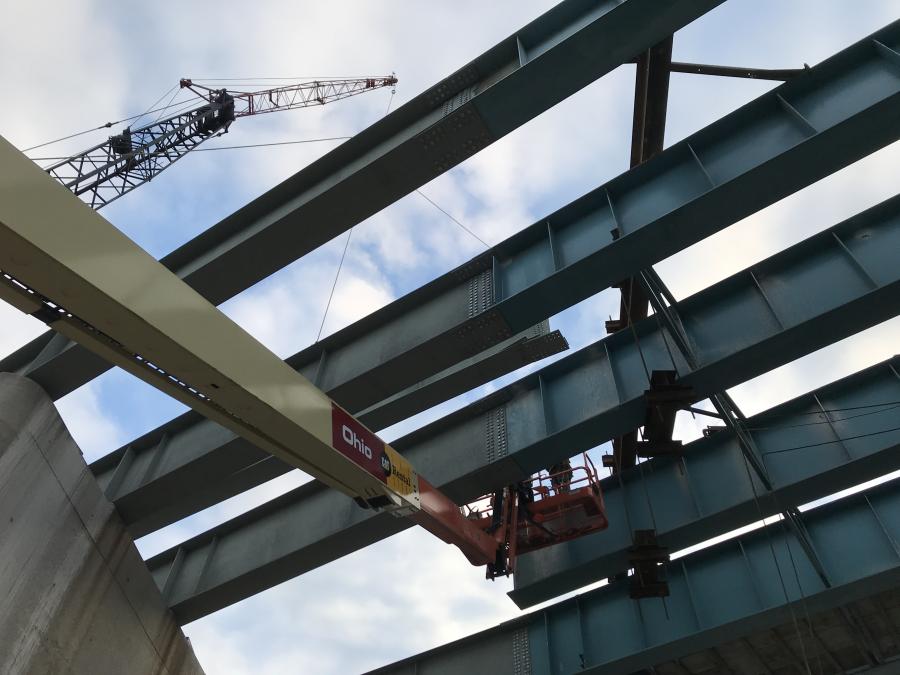 "One of the unique aspects of this project is replacing the hinge joints on the bridge spanning over the Great Miami River," said Zachary Holowecky of Ruhlin Company. In order to access these joints for removal, a causeway was built out into the river to provide a working surface for the crane to remove the hinge joints and install new girders. The causeway was built using the concrete deck slabs from the demolition of the bridge.

"The project is progressing smoothly as [better weather] is approaching," said Holowecky, who expects the project to finish on time. CEG