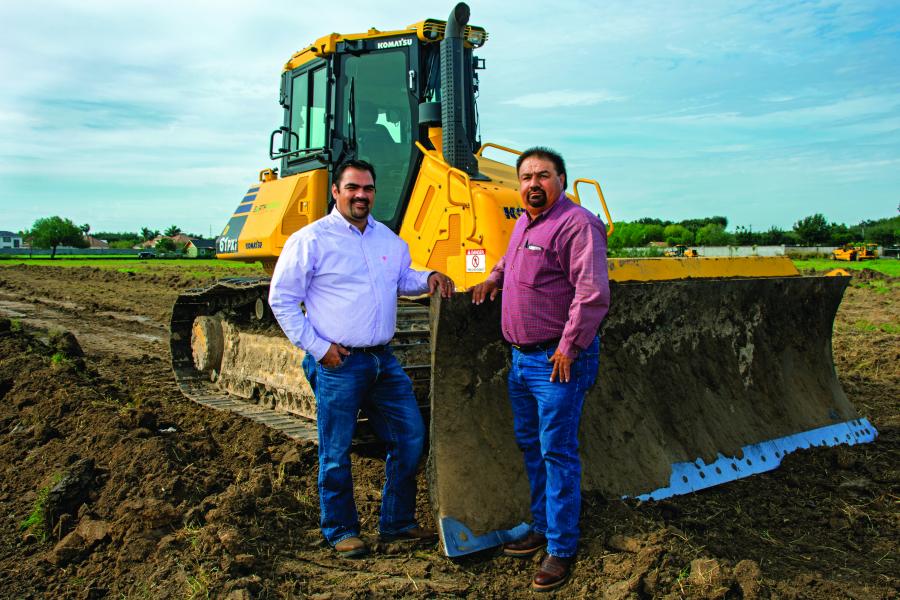 When Humberto "Beto" Garcia started Earthworks Enterprise in 2012, he knew the only way for it to succeed was for him to learn the earthmoving process, something he had little experience in. Fortunately, his father, Humberto Sr., was well-versed in what to do and could teach him the ropes.

"Dad always wanted to run a ‘dirt business,' as he terms this," recalled Beto. "I wanted to help make that a reality, so along with a partner, Jorge Andrade, we founded Earthworks Enterprise and made Dad the General Superintendent. I followed his lead, and he taught me the proper techniques of moving earth safely, productively and profitably. He has a machine engine inside of him; he doesn't stop. Dad is often the first one on the jobsite and the last one to leave."

Humberto Sr. started his career as a construction laborer and worked his way up to lowboy driver, then equipment operator. His experience paid dividends right away as he guided Earthworks Enterprise's first crew of four, which included father and son, through completion of site work for a private developer's residential subdivision.

"Our success and growth are directly tied to Dad's leadership and drive," Beto emphasized. "Immediately after we finished the first development, we moved to a second and have remained on a steady pace ever since."

Beto is Earthworks Enterprise's President while Andrade serves as the vice president of the Penitas-based company. It covers the Rio Grande Valley and usually has eight to ten jobs going at once.

Beto noted that in the initial stages, they focused on private work because Earthworks Enterprise had no bonding capacity. At the outset, the firm's small fleet consisted of a motor grader, water truck, roller and paver. 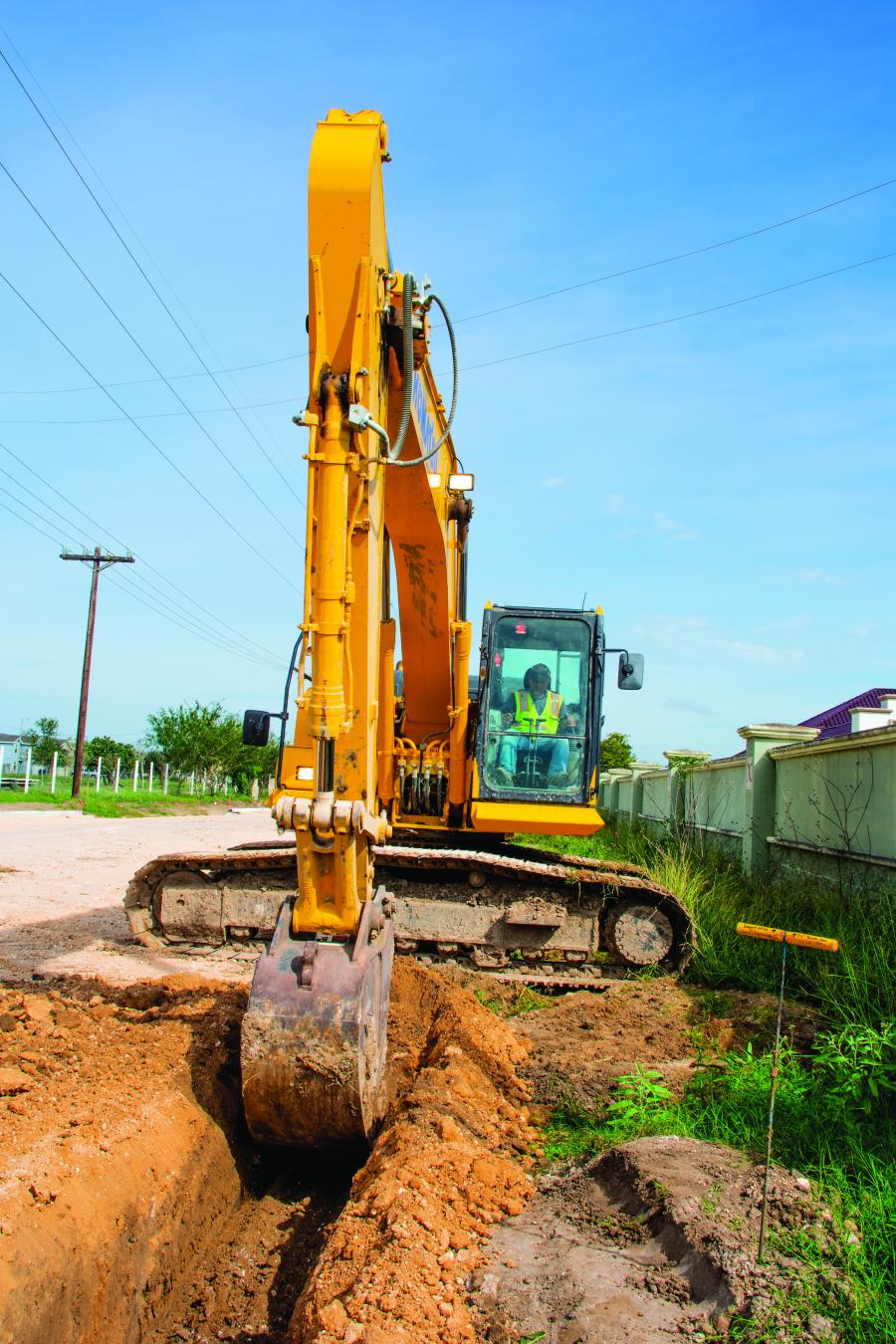 Seven years later, the company employs 60 people and has an assortment of machinery primarily for municipal and county jobs as a general contractor. Earthworks Enterprise self-performs nearly 100 percent of a project's scope with crews dedicated to dirt work, surveying, asphalt paving and concrete.

"We still do some residential, mainly with the same customers we established relationships with early on," shared Beto. "For the most part, however, large-scale, low-bid jobs that require multiple crews are now our bread and butter."

To date, its largest undertaking was a $6 million reconstruction for San Patricio County that involved 22 miles of road.

"Redoing the base included putting geogrid liner on the bottom, then placing 80,000 tons of limestone on top of it," said Beto. "That was followed by a two-course surface treatment and 20,000 gallons of asphalt. Instead of storm sewer, we reshaped the swales for positive drainage."

Earthworks Enterprise recently completed a three-mile full reconstruction and widening project for the city of McAllen that expanded an existing two-lane roadway into five. The company removed existing pavement and relocated and adjusted utilities. In addition, it put in sidewalks and storm sewer as well as curb and gutter, where none previously existed. Crews excavated approximately 19,000 cubic yards of dirt, installed 9,000 linear feet of utilities and 1,500 yards of concrete and put down some 6,000 tons of asphalt.

Another endeavor in McAllen saw Earthworks Enterprise cut and haul away nearly 50,000 yards of dirt for a new pond designed to alleviate flooding concerns during heavy rains. It also put in a small drainage pipe that will siphon off excess water, should the pond fill completely. 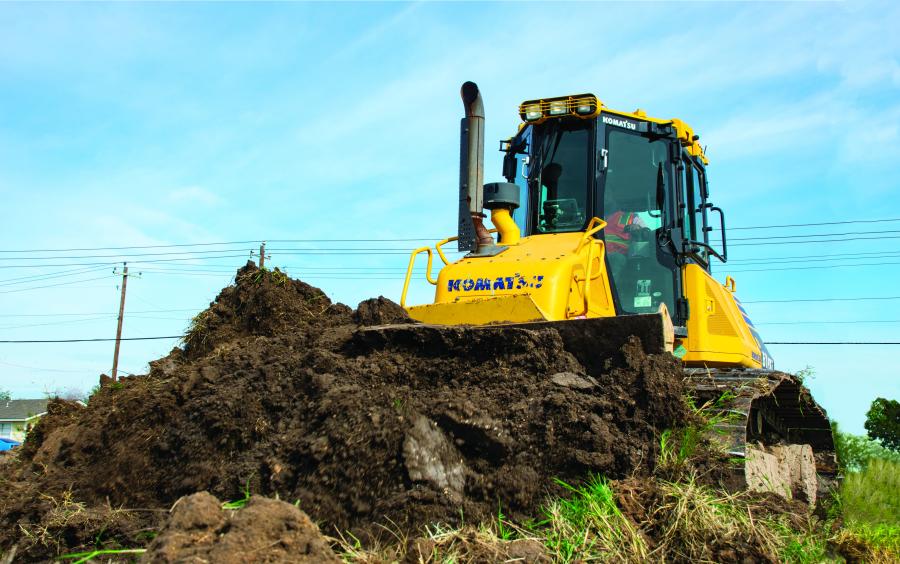 Prior to starting this project, Earthworks Enterprise surveyed the site by drone, built a computer model for the job and downloaded the completed file to the company's Komatsu D61PXi-23 intelligent Machine Control dozer. Earthworks Enterprise added the machine after Beto attended a lunch-and-learn event at WPI's Edinburg branch.

I was invited by a friend, who already knew about Komatsu intelligent Machine Control equipment," Beto said. "I liked what I saw and wanted to try a dozer. I was immediately impressed with the accuracy and how well it performed, so we purchased the D61PXi. We then quickly acquired a PC210LCi-11 excavator, too.

"The savings are phenomenal," he continued. "With the dozer, once we download the file, we turn on the automatics and let the machine go to work. It always knows where it is in relationship to final elevation and with each pass it puts the optimal load on the blade. There is no overcutting, so the need to replace material is eliminated. It helps a novice operator look like a seasoned pro and makes the experienced person even better."

Earthworks Enterprise achieves similar results with the excavator. The company performs mass excavations, as well as trench digs with the PC210LCi, which features semi-automatic control. Once target elevation is reached, it prevents the operator from cutting any deeper. 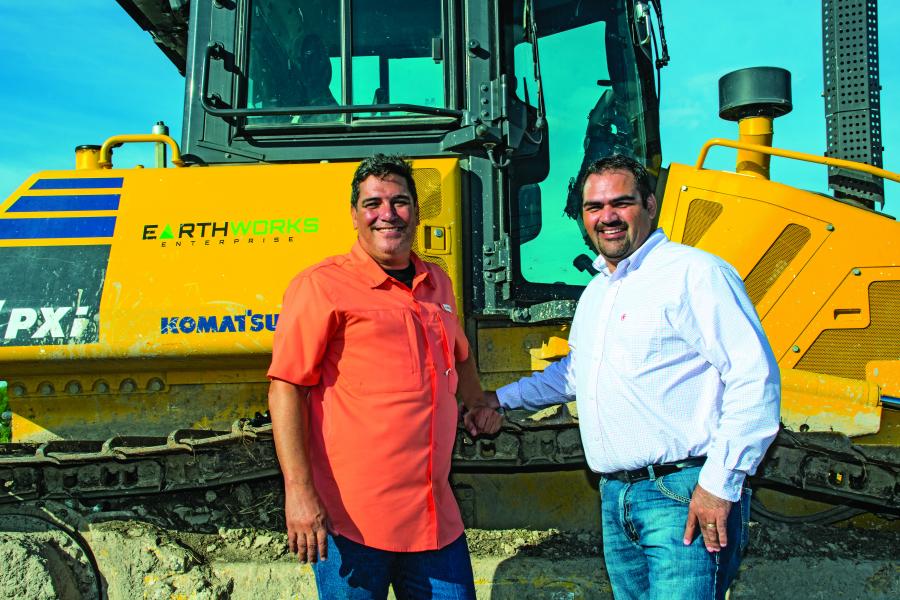 "In some instances, using the intelligent machines reduces our estimated project time by half, compared to the traditional method of repeated surveying and grade checks," said Beto. "We also really like that the GPS system is integrated, so there are no masts or cables to install or take down, which bites into production time. I definitely see us adding more intelligent machines as we're able."

"Omar and WPI give us outstanding support," said Beto. "They always have someone ready and willing to help, including their Technical Solutions Experts, if we have questions related to the intelligent machines or our models. If we need parts, they have them on-hand. We have built a great relationship in a fairly short time."

Ready to Take on Highway Work

Acquiring the expertise to build site models came relatively easy to Beto, who was in the computer industry prior to starting Earthworks Enterprise. His skills at running an earthmoving company have continued to grow, and he's taking steps toward the firm's future expansion.

"We're now Texas Department of Transportation certified, so we have been bidding highway work," Beto reported. "We are ready to attack that market, and I'm confident we will be successful in that arena.

"Seeing how happy Dad is tells me that I made the right move," he added. "I also love what I do now, especially because I get to do it alongside of him. Coming to work every day is enjoyable."

This story courtesy of Komatsu's "Customers in Action."