Among the help that has arrived in Ecuador from neighboring countries are civil engineers who have come to inspect the conditions of buildings to evaluate if they are habitable. 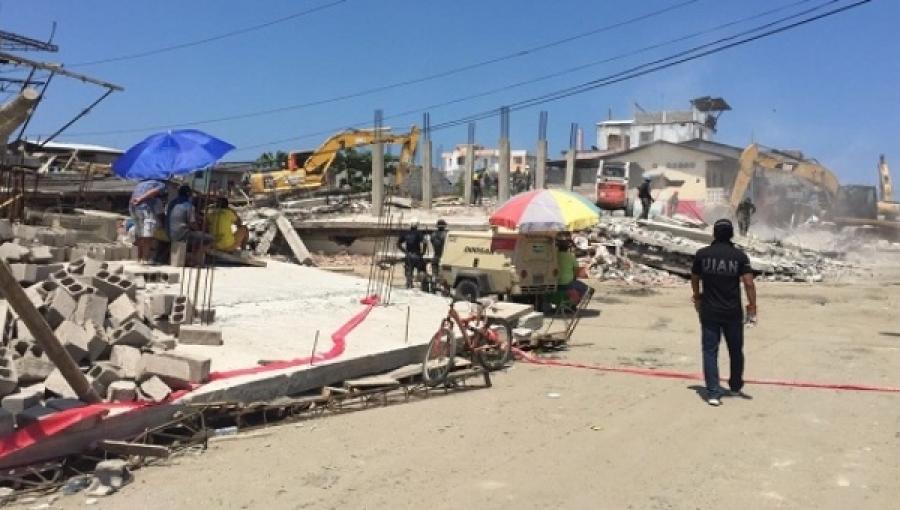 Image courtesy of teleSure. Ecuadorean President Rafael Correa announced Monday that his government intends to press charges against those who either through complicity or negligence caused the needless deaths of people in the April 16 earthquake.

The teleSUR network is reporting that Ecuadorean President Rafael Correa announced Monday that his government intends to press charges against those who either through complicity or negligence caused the needless deaths of people in the April 16 earthquake.

“There are individuals who acted with the intention to save a few extra pennies, and by doing so constructed death traps that were approved by local authorities,” said Correa.

Throughout the coast of Ecuador many survivors have questioned why so many buildings in so many places collapsed. Even in the very early days after the 7.8 earthquake, people speculated that poor construction was to blame.

“I would like to see the engineers and architects check building by building … because they collapsed really one piece on top of the other, and the people, they were in there,” said Joost Birnie, owner of a hotel in the town of Canoa.

Birnie, who is a builder himself, said he toured his town – which suffered devastating destruction – after the earthquake and could see signs of poor construction.

“It was easy to see that there was very little rebar in the cement, I would like to see an investigation about responsibility,” Birnie told teleSUR.

Rebar, short for reinforcing steel, is the backbone of the cement columns, which is the most common form of building construction in Ecuador.

Birnie speculated that the town's booming tourist industry may have led to corners being cut. His hotel was among the first built in what was once a village dedicated to fishing. He told teleSUR that buildings would practically spring up overnight.

Across the street from his hotel, a brand new building, which had only been in business for a month, also collapsed, lending credence to the theory that poor construction was a chronic problem in Canoa.

“Hundreds of lives have been lost due to poor quality construction. They did not even meet the old building codes, which were much less demanding than the current ones,” said President Correa.

Ecuador's government updated its building codes but these may have been ignored or unenforced.

Among the help that has arrived in Ecuador from neighboring countries are civil engineers who have come to inspect the conditions of buildings to evaluate if they are habitable. These engineers have also inspected the fallen buildings in order to ascertain the cause of the collapse.

Jairo Ovallos, a civil engineer who is part of Venezuela's Humanitarian Response Team and is presently in Ecuador, said that in his expertise “there is evidence that the buildings … present pathologies from a design point of view.”

“Unfortunately we discovered that many of the buildings that collapsed, and have not yet collapsed but have severe damage … indicate that the inadequate techniques, the poor quality of some of the building materials, and some techniques erroneously used such as the use of sand, amongst others … has made it so that the majority of the buildings we have inspected have led to the collapses that we have seen,” Ovallos told teleSUR.