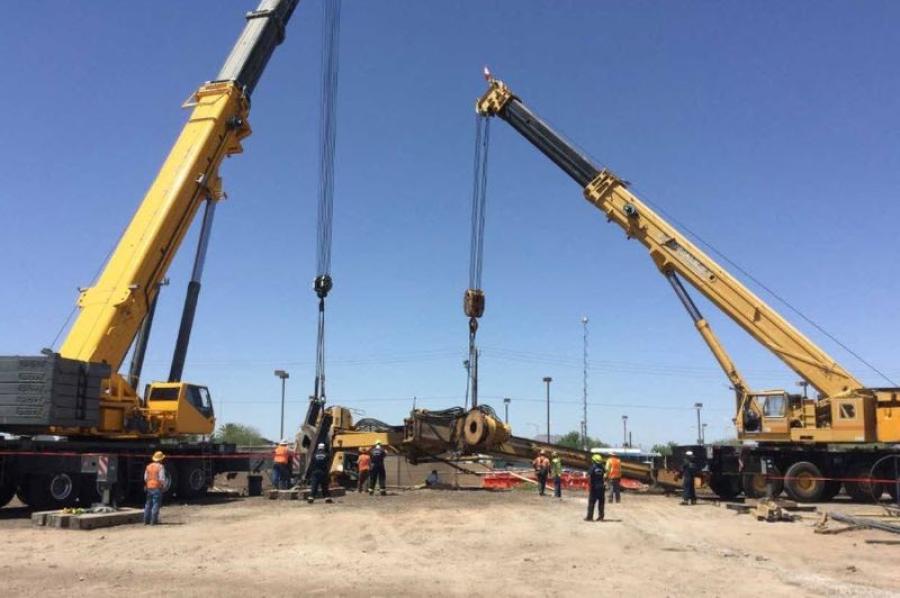 Workers have removed more than 50 tons of dirt from the site of a collapsed drilling rig in Phoenix as they try to locate a missing construction worker who is feared dead, azcentral.com reported.

Phoenix Fire Department officials said the drill-rig operator was on the rig when it fell on its side May 21, 2018, during construction for the Sky Train guideway system at Phoenix Sky Harbor International Airport.

Before excavation work could begin, crews had to safely remove the rig with two cranes May 22.

As of Tuesday night (May 22), recovery crews had gotten down to about 18 feet, a little more than halfway to the initial depth of the hole, Capt. Larry Subervi of the Phoenix Fire Department said. By Wednesday evening, crews had dug down 22 feet and the hole was 75 feet wide, but the ground remained unstable. The construction company, Hensel Phelps, is helping the firefighters and PFD's Technical Rescue Team with the recovery operation. Crews also are using backhoes to widen the search area. Fire officials said the drill rig worker could be as deep as 30 feet.

Vacuum trucks were brought in Tuesday evening to assist in the recovery efforts. Progress, however, has been slow because the ground around the hole is unstable. According to Subervi, as crews dig out sand, more sand continues to fall inside the hole, adding that for every foot excavated, crews had to go two to three feet wider.

Officials shifted from a rescue to recovery operation Tuesday given the amount of time elapsed from the initial incident and eyewitness accounts.

The incident occurred just south of Sky Harbor Boulevard, near the West Economy parking lot and west of terminals 3 and 4. The site was on Sky Harbor property, as construction is being done for the PHX Sky Train.

The Sky Train guideway work — the track the cars ride on — is being overseen by contractor Hensel Phelps. The Colorado-based company also worked on earlier stages of Sky Train construction.

The worker's name hasn't been released.