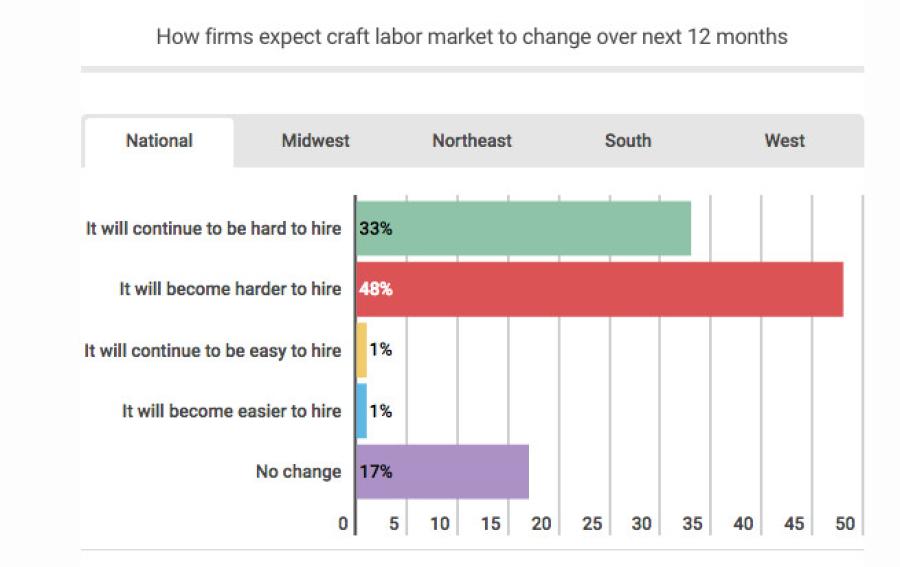 Eighty percent of construction firms report they are having a hard time filling hourly craft positions that represent the bulk of the construction workforce, according to the results of an industry-wide survey released Aug. 29 by Autodesk and the Associated General Contractors of America (AGC). Association officials said shortages pose a significant risk to future economic growth and they released a new workforce development plan to solve the growing problem.

Of the more than 2,500 survey respondents, 80 percent said they are having difficulty filling hourly craft positions, Simonson noted. Craft worker shortages are severe in all four regions of the country, with 81 percent of contractors in the West and South reporting a hard time filling hourly craft positions, almost identical to the 80 percent rate in the Midwest and 77 percent rate in the Northeast.

“With a rise in the share of firms having trouble finding skilled craft workers, it's evident that we need to reskill the future workforce,” said Sarah Hodges, senior director, construction business line at Autodesk. “Technology can help bridge this gap, and more firms are bringing training in-house to implement digital strategies such as building information modeling, or BIM, to ease staffing challenges and train the next generation of industry professionals.”

Tight labor market conditions are prompting firms to change the way they operate, recruit and compensate workers, Simonson noted. Sixty-two percent of construction firms report increasing base pay rates for craft workers because of the difficulty in filling positions. Twenty-four percent have improved employee benefits for craft workers and 25 percent report they are providing incentives and bonuses to attract workers.

The association also released a new Workforce Development Plan that identifies steps federal officials should take to support construction workforce development, including doubling the funding for career and technical education over five years and allowing more people with construction skills to legally enter the country. The plan also outlines new recruiting steps the association is taking, including launching a targeted digital advertising recruiting campaign and investing in innovative workforce solutions.

Click here to see the national survey results, analysis of the data and regional and state-by-state results.