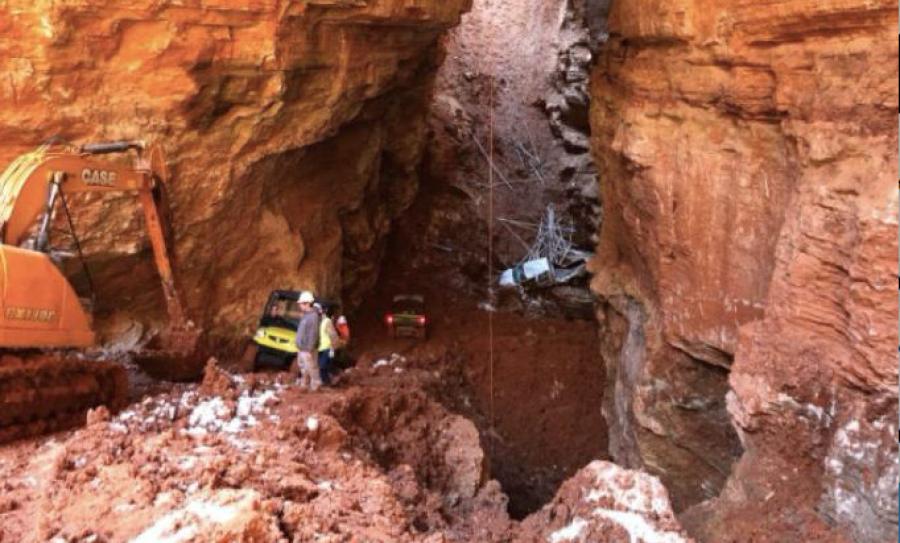 Emergency crews rescued a man from the sinkhole at Top of the Rock in Branson. (Western Taney County Fire Department photo)

A spokesperson for Top of the Rock said a third-party construction contractor lost control of his pickup truck and slid off a path, used by construction crews, into the sinkhole. It happened around 11:15 a.m. Wednesday, March 21.

According to the online crash report from the Missouri State Highway Patrol, the man was driving a 2008 Ford F250. The vehicle was totaled. The man was reportedly not wearing a seat-belt. His injuries are listed at "serious" and he was transported to a Springfield Hospital by ambulance.

It took emergency personnel about an hour to get the man out of the sinkhole and on his way to the hospital. According to medical personnel, the man was located about 120 to 125 feet down in the sinkhole, after his truck, which was reportedly loaded down with material, rolled down into the hole.

"Where the patient was located, it put up some logistical hurdles for us, but we were able to overcome them. We used various pieces of equipment that we own as well as equipment from Western Taney County Fire to help us get to the patient and get him out," Johnathan Tudor, with TCAD Paramedics, said.