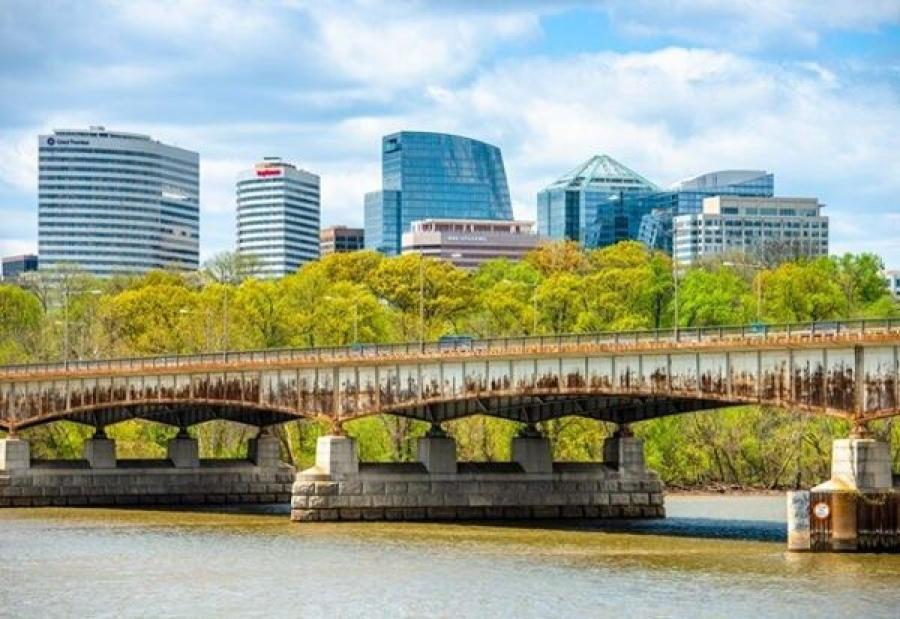 A view of the Roosevelt Bridge from the D.C. side looking across to Rosslyn. The bridge is undergoing emergency repairs.

Emergency repairs that will enable Washington, D.C.'s Theodore Roosevelt Bridge to safely support the weight of regular traffic will likely last through the summer and cost about $6 million, the District Department of Transportation (DDOT) said Feb. 15.

It is the latest hindrance to the Washington, D.C., commute as more employees return to in-person work.

The Washington Post reported that the DDOT closed three travel lanes and restricted access to heavyweight vehicles late in the day on Feb. 11 on the span between Washington and northern Virginia, suddenly disrupting traffic patterns for thousands of people who use the route to commute into the nation's capital.

Vehicles are being pushed into the two outer lanes in each direction while those weighing more than 10 tons are restricted, forcing buses and heavy commercial vehicles to different Potomac River crossings. The restrictions are prompting transit agencies and some drivers to find other options at a time when traffic levels are rising and Metrorail is operating with reduced service.

Bridge users already are encountering delays and rethinking their commutes. At least six commuter bus routes from northern Virginia are being rerouted to other entry points into D.C., such as the Arlington Memorial Bridge and the 14th Street Bridge.

The emergency closure followed an inspection earlier in February that found steel support beams on the bridge had continued to deteriorate, according to DDOT. The agency added that its crews recently discovered excessive damage after a contractor removed loose rust.

The short-term fixes will involve steel repairs to the floor beams, DDOT told the Post, but the work will not start until materials arrive — a schedule likely to be affected by supply chain issues plaguing most areas of the country.

D.C. officials say the emergency repairs will enable the Roosevelt Bridge to support normal operations. That will be followed by a full rehabilitation in a couple of years using funding from the federal $1.2 billion infrastructure law Biden signed in November.

The Roosevelt Bridge carries Interstate 66 over the Potomac and is a commuter artery that supported about 150,000 vehicles daily before the pandemic. It has not had a major rehabilitation since it opened in 1964 and was rated in "poor" condition in 2018, officials said — a designation that does not necessarily mean it is unsafe to use.

It also is past a bridge's standard 50-year life span, the Post noted.

A report card issued by the American Society of Civil Engineers (ASCE) in 2021 gave D.C. bridges a B-minus grade, describing that about three percent of bridges in Washington are classified as poor even as "significant progress" has been made in the past decade to rehabilitate and replace old spans.

Thirty percent of D.C.'s 244 highway bridges — 208 are owned by DDOT and 36 are maintained by the National Park Service — will need to be rehabilitated in the next decade, according to the ASCE report and obtained by the Washington newspaper. Those include bridges built or rehabilitated before 1980.

The report listed the Roosevelt Bridge, along with the H Street Bridge near Union Station, as top priorities. Both "have continued to deteriorate in recent years and are now considered to be in poor condition," the engineering report said.

A bridge rated as poor could become unsafe without substantial improvements, according to the ASCE.

Delays Due to Fixes Could Last Up to Six Months

Virginia and Arlington County transportation officials are urging commuters to choose alternative routes, including using Metrorail when possible. Those who use the Roosevelt Bridge should expect delays for up to six months, they said, although no significant effects had been reported by Feb. 15 as commuter traffic hovers below pre-pandemic levels.

Virginia Department of Transportation (VDOT) Spokesperson Kathleen Leonard told the Post that the state had been in contact with DDOT about rehabilitation plans for the bridge and was brought onboard Feb. 11 to coordinate the emergency lane closures. She said the priority in the coming months will be to ensure drivers are aware of weight restrictions and changes to traffic patterns.

Although rush-hour commute levels into D.C. are down compared to before the pandemic, traffic could pick up in the coming weeks as more companies and federal agencies call back workers. Even with reduced traffic levels, some commuters have reported backups and delays.

Fairfax County, Va., resident Alan Lawrence was on his first trip back to work in Washington Feb. 14 when he met a 20-minute backup at the Roosevelt Bridge. He said his only warning came from colleagues, who sent text messages that morning after coming upon bumper-to-bumper traffic that resembled the pre-pandemic commute.

Lawrence told the Post that he will time his arrival at the bridge later than the usual 8 a.m. to avoid the thickest traffic and will consider other routes. He said he expects that traffic will worsen as offices reopen. The bridge chaos, he said, might result in the company reconsidering plans that require workers to be in the office three times a week.

"We're going to have to figure out how everybody can manage this and not add another 30 or 40 minutes to their commute every morning," he explained.

"We do encourage people traveling between Arlington County and Washington, D.C., to consider other routes on Key Bridge or Memorial Bridge, or transit options like Metrobus, the DC Circulator bus or Metrorail," said Arlington County spokesperson Claudia Pors.

Bus riders, however, also are being affected by the Roosevelt Bridge restrictions. At least six routes that carry passengers between northern Virginia and downtown Washington are using alternate crossings, including Metrobus Routes 3Y and 16Y, which service Arlington.

DDOT Director Everett Lott said over the weekend that the city is restricting heavy vehicles from the bridge "out of an abundance of caution."

Commuters Will Always Find a Way

Michael Mills, a Capitol Hill resident who uses the bridge weekly to get to Arlington's Ballston neighborhood for hockey games, told the Washington newspaper that he was caught off guard on the evening of Feb. 11 as he returned home from a game.

Heeding the advice of regional transportation officials, he said he will consider the 14th Street Bridge as an alternative. Even if the partial closure is inconvenient, he noted it was reassuring to see the city taking precautions.

"I will try it again this Friday and if it slows me down, then I will just go a different route. You don't want to repeat what happened in Pittsburgh," he said, referring to the bridge that collapsed Jan. 28, injuring several people hours before President Biden was scheduled to speak in the city about funding to repair the nation's infrastructure.

DDOT is due to receive $225 million from the bill over five years to repair eight bridges in the city, including the Roosevelt Bridge, D.C. Mayor Muriel E. Bowser told the Post in January.