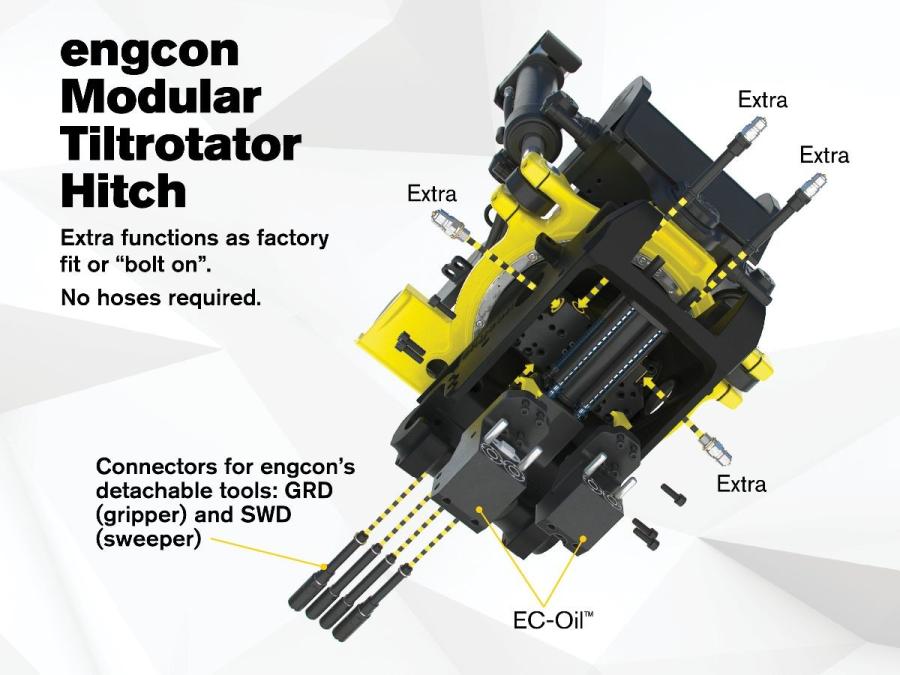 Engcon has moved from prototype and preproduction into the manufacturing stage on the hoseless EC-Oil automatic connection system and hydraulic connections for the GRD grab cassette and the SWD rotating brush.

The hose-free design provides simplicity and an uncluttered quick hitch. Because the block is bolted on, without the need for hose runs, retrofitting Engcon's EC-Oil automatic oil connection system is simple. And it's just as easy to install and retrofit EC-Oil to Engcon's new retrofittable, detachable GRD grab cassette and SWD rotating brush, according to the manufacturer.

Along with the creation of the new modular quick hitch, Engcon has developed a new high-flow swivel that permits hydraulic flows up to nearly 53 gpm. This is achieved by feeding the hydraulic functions directly, without oil having to pass through the tiltrotator's valves. The new high-flow swivel also has a separate case drain line, which allows oil to be drained via the tiltrotator. In addition, the swivel is built for pressures up to almost 5,100 psi.

"This development is part of our unique modular concept where we offer the customer a basic product to which additional functions are easily added later. We also eliminate problems from hoses moving around in the quick hitch and leaking," said Fredrik Jonsson, R&D at Engcon Group.