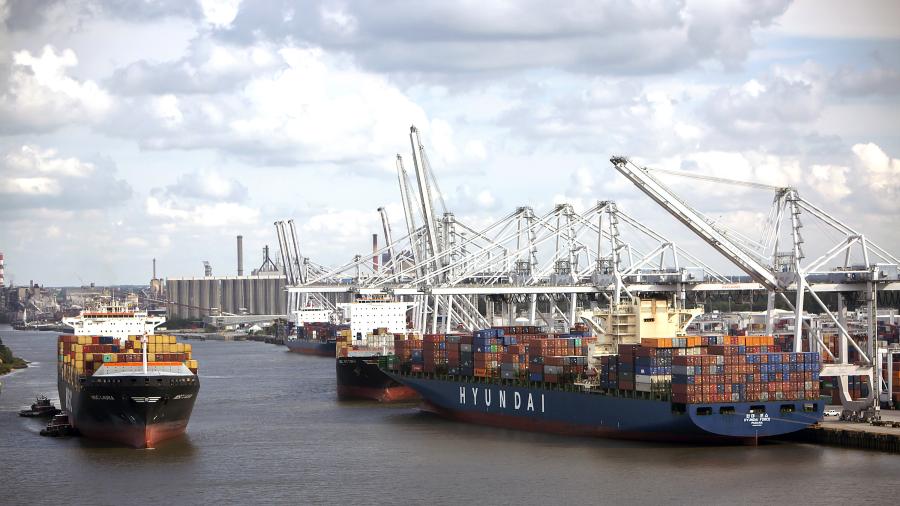 Deepening the shipping channel to the Port of Savannah is now expected to cost taxpayers a whopping $973 million, a price tag that's 38 percent higher than the federal government's previous estimate.

The Army Corps of Engineers updated its cost estimate for the massive dredging project in March, Russell Wicke, a spokesman of the agency's Savannah district office, said. The last time the Corps had estimated the project's total cost in 2014, the anticipated price was $706 million.

Like other East Coast port operators, the Georgia Ports Authority has insisted deeper water is critical to make room for larger cargo ships that began arriving via an expanded Panama Canal last year. Work began in the fall of 2015 to dredge 39 mi. (63 km) of the Savannah River connecting the Atlantic Ocean to the Savannah port. At the soonest, the job is expected to be done in early 2022.

Why the big jump in cost? The expected completion date has been pushed back two years since the last cost estimate three years ago, Wicke said. Higher demand has caused the price of dredging services to increase. Machines being installed to replenish oxygen levels for fish in the river are requiring more costly stainless steel pipes. And plans for disposing of dredge sediments laced with cadmium had to be redesigned to better protect wildlife.

“There are multiple contributing factors to the price increase,' Wicke said, noting that some of the added costs had already been reflected in contracts awarded since 2015. “Before we even did this cost update, we started seeing these costs coming in from awarding [contracts] higher than what we estimated. So we did know it was going to increase.'

For example, the Corps had expected to spend about $100 million to deepen the river's 18-mi. (28.9 km) outer channel. The final contract awarded was for $134.5 million. Likewise, the contract to install the oxygen injection machines ended up costing $99 million, not the anticipated $75 million.

The new cost is more than double the $459 million spending limit Congress placed on deepening the Savannah harbor when it was first authorized in 1999. As costs increased during a long period of planning and studies, it had to be reapproved in 2014 at $706 million before dredging could finally begin. Now Congress will need to reauthorize the project at $973 million.

Dredging will be allowed to continue under the 2014 spending cap, Wicke said. But the project won't be able to exceed the now-outdated limit unless Congress approves.

Based on its latest analysis, the Army Corps now says the deeper Savannah harbor will yield greater economic benefits — essentially by making shipping more efficient — than previously estimated. Wicke said the agency now expects every dollar spent on the project will return $7.30 to the economy. The prior expectation had been $5.50 in benefits per $1 spent.

Republican U.S. Sen. Johnny Isakson touted those revised benefit numbers in a statement, saying he will keep pushing to secure at least $100 million in federal funding annually for the harbor expansion to avoid delays.

“We are committed to seeing this project to completion and will work with our federal partners and the state to ensure that the necessary funding is provided for an on-time completion,' Isakson said.

GOP Sen. David Perdue also stood by the harbor deepening as a “vital economic project,' while blaming the federal bureaucracy for driving up costs before President Donald Trump took over the White House.

“It took 17 years to get the original project approved because of bureaucratic delays,' Perdue said in a statement. “There's no doubt Washington caused this cost estimate to increase too.'

Georgia lawmakers have already approved about $260 million to cover the state's expected share of the harbor expansion. Even after Congress passed a law last year reducing the percentage states would pay for deepening projects, the increased cost estimate means Georgia taxpayers will be expected to contribute about $20 million more, said Mackie McIntosh, the Corps' chief of civil works in Savannah.