Eutaw Construction Ahead of Schedule on State Route 76 in Mississippi 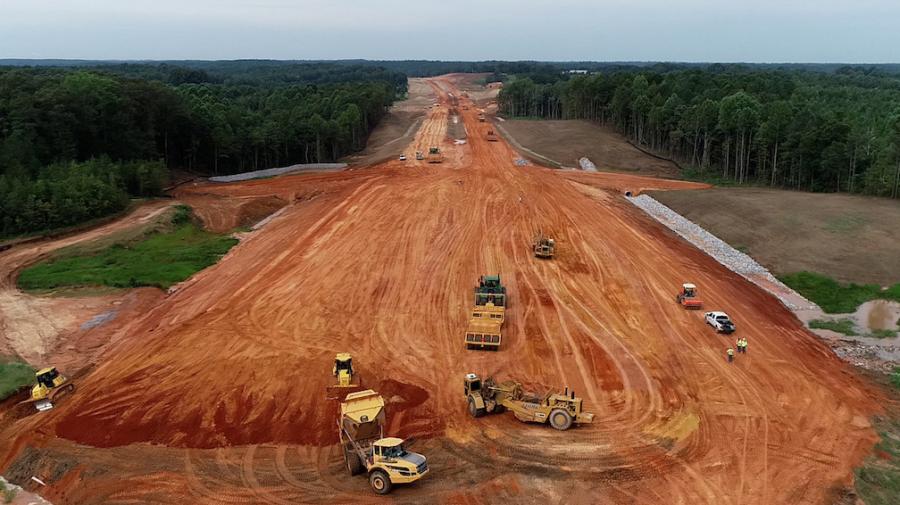 Eutaw Construction Company Inc. crews will be onsite for the construction of MDOT’s $81 million State Route 76 construction in Itawamba County until the end of 2023 as they build a 9-mi. extension of the 4-lane highway. (Mississippi Department of Transportation photo)

Eutaw Construction Company Inc. crews will be on-site for the construction of the Mississippi Department of Transportation's (MDOT) $81 million State Route 76 construction in Itawamba County project until the end of 2023 as they build a 9-mi. extension of the 4-lane highway.

The initiative extends SR 76 from SR 23 to SR 25 and forms a part of the Appalachian Development Highway System (ADHS) in Mississippi. 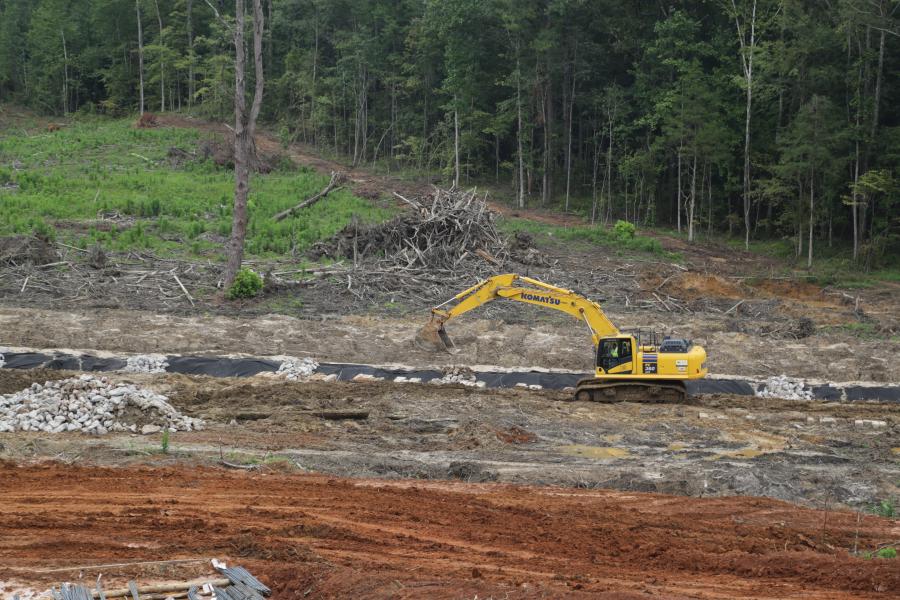 The work includes a total of eight hydraulic bridges (four in each direction) totaling 3,300 linear ft.; and two sets of twin bridges over Chubby Creek. There also are two box bridge locations and four box culvert locations. Due to the terrain with hills and hollows, there is 17,000 linear ft. (3.2 mi.) of re-enforced concrete pipe throughout the project.

"The project will complete the final portion of ADHS Corridor V, which runs from Interstate 55 in Batesville to Interstate 24 in Chattanooga, Tenn., connecting intermodal facilities in the three states, including the Port of Huntsville and the Tennessee-Tombigbee Waterway," said Brian Ratliff, MDOT's chief engineer. "Corridor V links automotive and furniture manufacturing industries in the Mid-South. The increased capacity will help carry anticipated increases in freight traffic, especially between Toyota in Blue Springs and the Toyota-Mazda site in Huntsville, Ala."

Presently, a 2.5 mi., 4-lane section of Corridor V stretches into Mississippi from Alabama. The extension is needed because freight traffic along Corridor V currently has to use a 13-mi. section of two-lane SR 23 when traveling from Interstate 22 to Alabama. "MDOT's number one priority is the safe and efficient movement of goods and people," said Melinda McGrath, MDOT executive director. "This final phase of Corridor V will take freight traffic off two-lane highways and move it to four-lane highways specifically designed for this purpose." 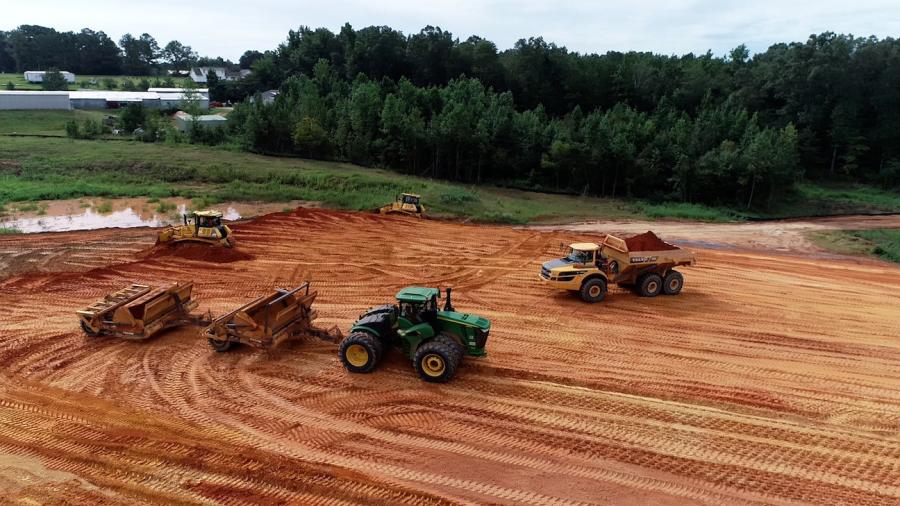 The project is being funded in part by a $52.4 million Infrastructure for Rebuilding America (INFRA) grant.

The new highway will have an asphalt riding surface (approximately 151,000 tons) and concrete bridges. The roadway was designed by Neel Schaffer and the bridges were designed by Michael Baker International Consulting Engineers.

The high-volume change soil encountered on the project will be removed and backfilled with a specified borrow material (Cl B9-6). All of the subgrade material will be chemically treated to a depth of 6 in. and will be topped with a 7.75-in. layer of granular material. The top 6 in. will be cement treated.

The asphalt pavement structure will consist of four lifts of pavement for a total asphalt thickness of 7.75 in. The total structure thickness is 13.75 in. The road structure is based on a 20-year asphalt lifespan.

The extension is being built on former farm land, forests, fields and some rural residential land. It also crosses four tributary streams, which are habitats of some freshwater mussels. The operations at the stream crossings require minimizing the impacts to the water and species inhabiting them.

"Starting the job is always a challenge," said Stephen Burdine, Eutaw's project manager, whose firm secured the contract last March. "Secondly, we were battling the weather for the first two months of the project. The rain impacted the earth work, but in the last two months the weather has cooperated and that allowed us to get ahead of schedule through strategic planning and extended hours."

No soil, water or utility issues have been encountered thus far.

"We're out in the middle of the woods," said Burdine. "The soil conditions are pretty good for the job, and we haven't had much issue there. Right now, it's strictly day time work. We have a schedule and a plan as to how the job is to be constructed. And everyone has fallen into it — we're working to complete it."

Construction surveying is still ongoing for the nearly 480-acre site. A virtual map has been created for the layout of the highway, bridges and drainage infrastructure. This has been supplemented by excavators, dozers and scrapers equipped with GPS systems. 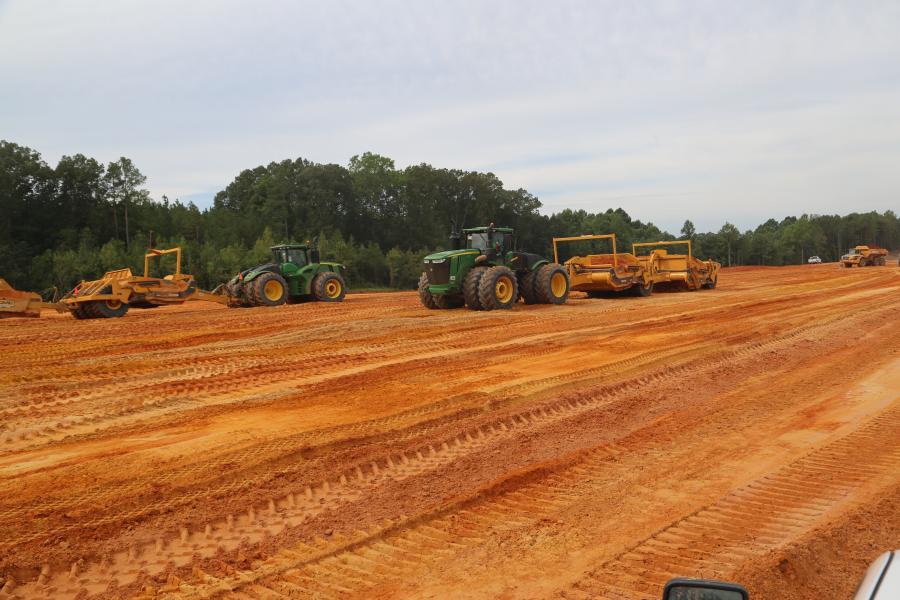 So far close to140 acres have been cleared and excavated.

"We have a 340 to go," said Burdine. ‘We're logging marketable timber. One thing that has hindered us on logging has been the COVID-19 pandemic. Lumber mills are not taking as much logged timber as they normally would due to all the mills running at half capacity and half staff."

The trees are being harvested by a subcontractor, HW Watson and Son Logging Inc., which is using Tiger Cat 620s and 720s to cut and drag the fallen trees and John Deere log loaders to load out logs. The logging process is based on creating access roads for the equipment that will open the site for earth work operations. Until the timber can be sent for processing, it is being stored onsite. The harvesting operation removes the tree stumps, making it easier for the earth work to proceed rapidly.

The tree removal process has reached the point where earth work, site preparation (subbase), drainage installation and bridge crews can work simultaneously and construction equipment and materials can easily access and exit the work site.

"The earth work operations are going smoothly," said Burdine. "We're dealing with mainly sandy soils and some heavy clay deposits. Other than the heavy clays, the materials encountered are ideal for earth moving equipment."

The material being excavated is being re-used on-site as fill for the fields. Equipment fitted with GPS systems is ensuring that specifications for the road base and drainage infrastructure are easily being attained.

"The scrapers are more for the mass hauling," said Burdine. "Our tractor pans are all equipped with GPS, so you're able to cut grade with them with little to no support." 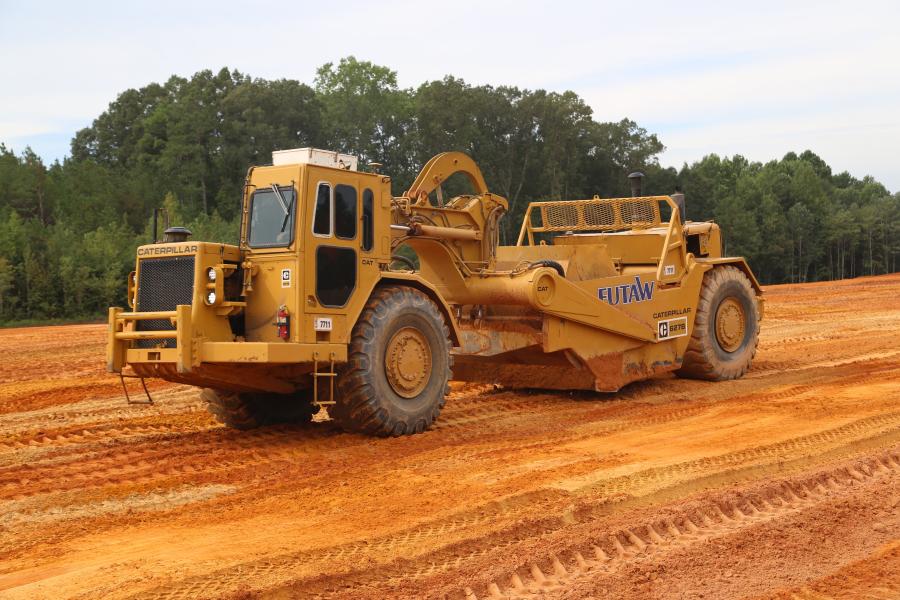 The box culverts — 1,695 ft. to be installed — will be cast-in-place. The reinforced concrete pipe — approximately 17,000 linear ft. — is being supplied by B&B Concrete Company Inc. of Tupelo, Miss.

"It is taking approximately six to eight weeks to fully construct each box culvert," said Burdine. "On a good day we can install approximately 200 linear feet of reinforced concrete pipe per crew. The pipe runs on this project are relatively short, so production is lower than what can normally be expected. The pipe is being delivered weekly and staged at different locations for easy access once the pipe installation process begins."

Ninety percent of Phase 1 earth work has been completed, and with the roadbeds laid out, the operations to install the subbase, base and asphalt top began in mid-September.

"The challenge is to get as much asphalt down as we can between now and when the cold winter catches us," said Burdine, who noted that paving is typically not done between December and March.

The operation to drive the steel piles, which went down 70 ft., began on June 12 and when completed on July 2 the substructure crews moved in to do cast-in-place concrete pours and install prefabricated concrete girders, some of which weigh 80,000 lbs. and are 100 ft. long.

"The beams are being lifted with two Kobelco CK 1100G cranes working in tandem," said Burdine. "We have the equipment and manpower to set multiple spans — six beams/spans in a single day."

The Chubby Creek Relief bridges are being constructed via similar process.

"The team dynamic is very good," said Burdine. "When we were awarded the project, we had a plan of attack and we've worked it as best as we're able to. As far as the work ethic of the crews and how the project is going, we wouldn't be close to where we are now without the guys out here." 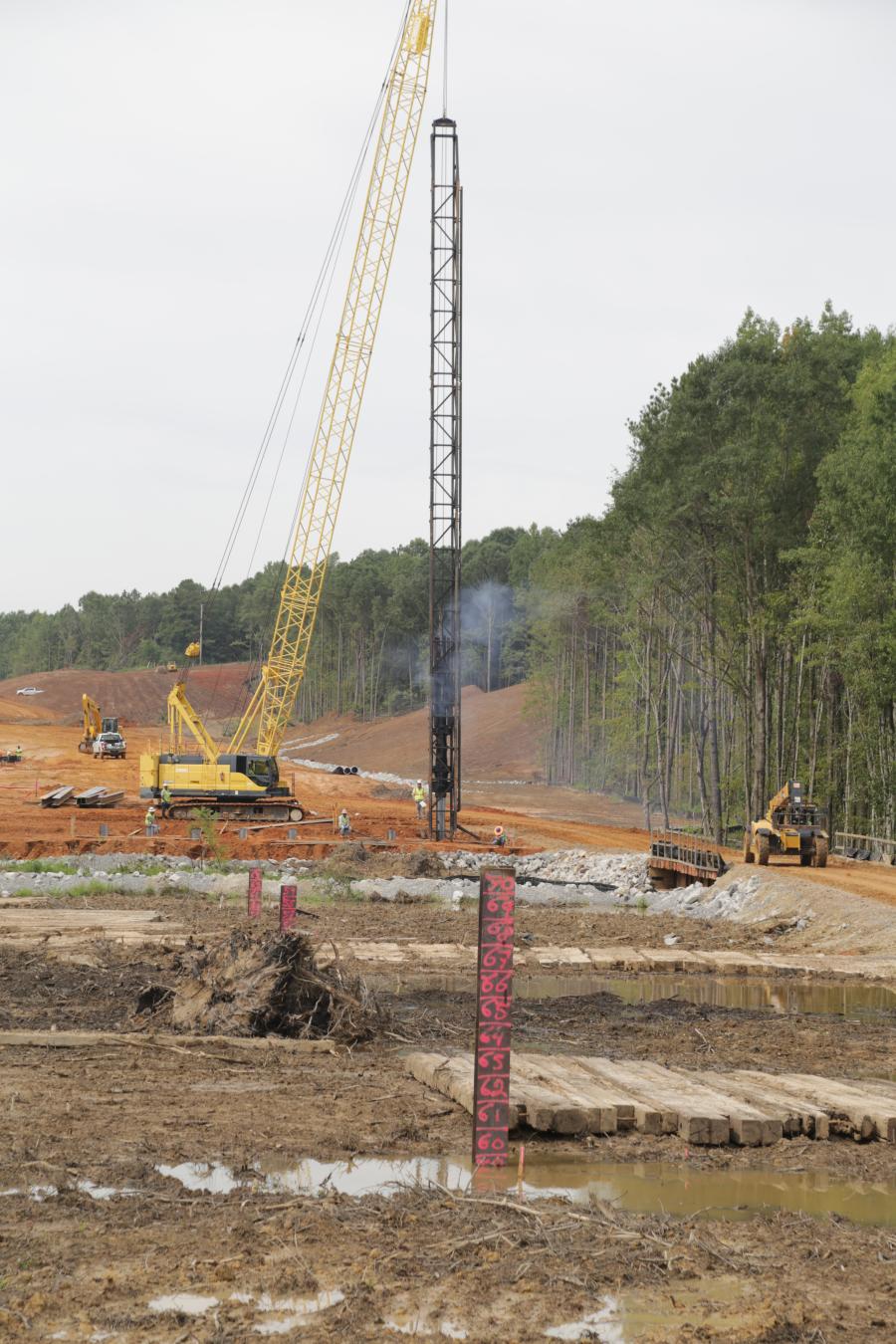 "With the material we are excavating, cutting edges are one of the main wear items that we have encountered," said Burdine, who noted that Eutaw has on-site mechanics. "We also encounter blown hydraulic lines and routine repairs, but our people can replace blown hydraulic lines and get equipment back up and going in a couple of hours normally. We have a lot of new equipment on this project, and there are not many major equipment issues per se."

"They are doing a phenomenal job, not only with service and parts, but also with intelligent machines," said Burdine. "They are hands on and always keeping us up-to-date with all the new technology coming out on equipment. We have good relationships with the dealerships, and basically what we look for is good service and dependability."

The progress thus far backs an ethos that Burdine takes to heart — "Start the job strong and don't let up. Once you start it, you have to follow through with it, making sure everything is done correctly along the way." CEG