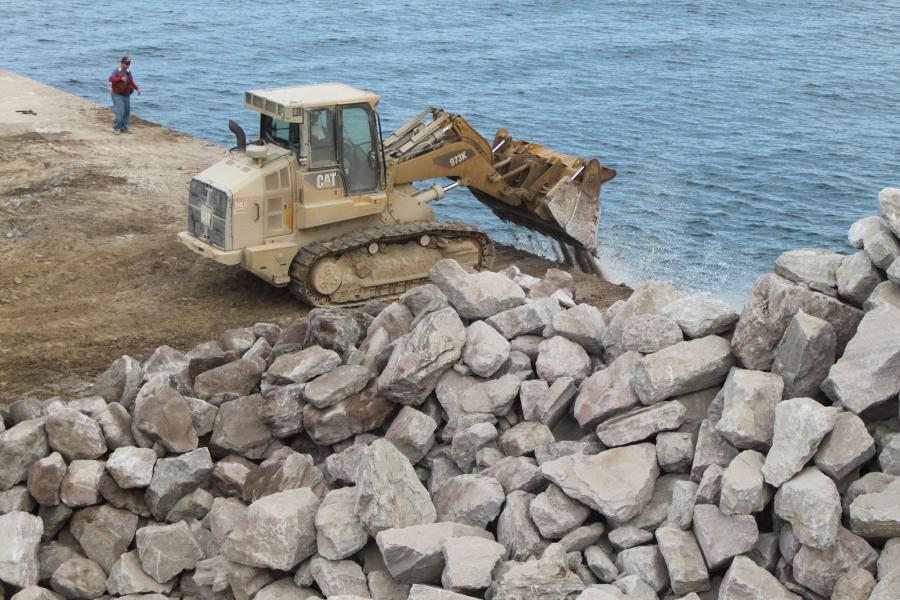 The boulders are pushed off the deck of the rock barge using a track loader. The placement of rock is between 38 and 48 ft. of water. (Southern California Edison photo)

In an effort to create one of the world's largest artificial reefs, crews in San Clemente, Calif., are strategically dumping tons of rock onto the ocean floor. The $20-million dollar expansion project will stretch Wheeler North Reef — a 174-acre, man-made kelp forest — more than 200 acres to Dana Point Waters.

"When expanding a reef, the placement requires precision, and also continued focus to make sure the implementation meets design specifications," said project Manager Jenny McGee, an ecologist who specializes in the coastal habitats of Southern California. "Recreating a massive natural ecosystem is a daunting task; however, because the reef is so heavily studied, we have a high confidence that the expansion will meet the compliance demands of the permits."

Southern California Edison (SCE) is expanding the reef to 384 acres, more than double its current size. Mandated by the California Coastal Commission (CCC), the reef is intended to facilitate kelp forests that were lost to warm-water discharge from the San Onofre Nuclear Generating Station (SONGS).

According to CCC, a five-year monitoring program on the Phase One experimental portion of the artificial reef mitigation project was completed in December 2004. The CCC approved SCE's final plan and coastal development permit for the Phase Two mitigation reef in early 2008, and construction of the reef was completed later that year. The Phase Two reef was designed and constructed as 18 polygons ranging in area from 1.35 to 38.88 acres.

"A team of independent scientists have monitored the reef since 2009 whose studies conclude that the Phase Two reef is performing very well, supporting kelp and behaving like a natural reef when compared to other natural reefs in the area," said McGee. "However, between 2009 and 2016, although functioning like a natural reef, Wheeler North Reef has consistently not met the absolute standard to support 28 tons of fish annually, and has not earned any mitigation credit for compensating for the resources lost due to SONGS operations." 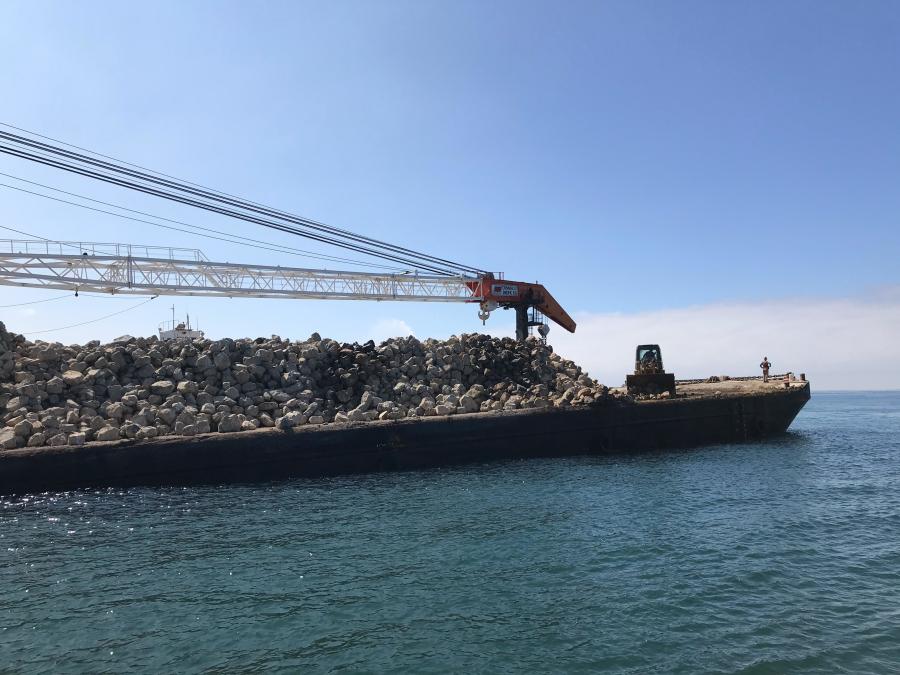 The expansion requires one derrick barge, an operating bulldozer and one backup, three tugboats, roughly six rock barges and a crew boat. The reef is constructed using up to 170,000 tons of quarry rock ranging in size from 1 to 3 ft. in diameter. The rock must comply with a series of specifications, including size, density and specific gravity.

The boulders are pushed off the deck of the rock barge using a bulldozer. The placement of rock is between 38 and 48 ft. of water.

"The rock is sourced from three quarries, two on Santa Catalina Island and one in Ensenada, Mexico," said McGee. "The rock is loaded at the quarry onto flat barges that are towed to the project location by specialized tug boats. Trips range from one to four days of travel."

The contractor brings decades of experience to the project. Connolly-Pacific Co., Long Beach, Calif., a vertically integrated rock quarrying and marine construction company, has built levees, sections of the Port of Long Beach and the Phase Two mitigation reef. For this undertaking, the crew, marine wildlife monitors, project superintendent, engineers and field project managers board a crew boat out of Dana Point each day at 6 a.m. They arrive at the derrick, hold a safety tailboard and start work once all the equipment is cleared of wildlife. A typical day ends at 6 p.m.

The Derrick Barge Long Beach (DBLB), a 255-ft.-long barge, is equipped with a 300-ton capacity crane and complex GPS spatial navigation systems. Separate barges loaded with approximately 4,000 tons of rock are connected to the DBLB side by side. A bulldozer is lifted by crane from the DBLB and placed onto the rock barge. The DBLB is positioned in the exact location for the rock placement using the GPS systems, and manipulation of the anchor system on board.

"Once in position, the bulldozer is used to push the rock off the deck of the rock barge in a linear pattern. This activity is repeated continuously, as the barge moves slightly every few minutes to distribute the desired layout of the quarry rock to create the reef."

McGee said the project has not been without its share of challenges.

"Navigating the permit and licensing process with the various stakeholders was a complex effort that required input by various subject matter experts. Safety is SCE's highest priority and greatest focus, especially given the environmental dynamics of constructing in open water. Sea lions are very curious about the work and have come in a little too close sometimes. We have to stop work until they are safely out of the protection zone."

As for the condition of the existing reef prior to the ongoing expansion, "Wheeler North Reef is performing very well, and functioning as a natural reef," said McGee. "It's just not large enough to meet the required standards of SCE's Coastal Commission permit."

Expanding the reef has required a great deal of planning and preparation.

"We design the reef and then procure the rock that will form the reef," said McGee. "The reef is divided into polygons, and the rock placed via GPS onto those polygons. Divers then verify the rock is being placed exactly where it needs to be.

"We performed dive surveys, and extensively studied the sea floor, conducting bathymetric and multi-beam sonar studies to map and develop characterization of the sea floor and aid in the project design and placement of the polygons. We conducted pre-construction surveys for white abalone and for an invasive sea plant, Caulerpa."

In addition, the State Lands Commission consulted with Native American tribes regarding the project area, as part of the permitting and licensing process.

"During the consultation, the Acjachemen Nation raised concerns that tribal cultural resources could remain within the project area, which had been occupied prior to being inundated by rising seas levels. The consultation led to a series of dive surveys and a redesign of the project to eliminate the culturally sensitive area of concern from the project, and identified additional areas."

Dive surveys are conducted both by SCE contractors and independent scientific researchers. Their data is supplemented by multi-beam sonar data that takes a picture of the sea floor. Collectively, the data is used to evaluate if the constructed portions meet the design specifications and accuracy standards. Dive surveys are conducted for each polygon once it's fully constructed and can be completed safely, clear of the construction area.

The project, which is funded by SCE customers, must be monitored. An independent group of scientific researchers from the University of California studies the reef annually, and presents findings in a report and public hearing. The monitoring is scheduled to reduce frequency over time.

"Although this is a mitigation project designed to replace impacted resources, once the mitigation is fulfilled, the reef will continue to provide beneficial ecosystem services for generations," said McGee. "Unlike artificial reefs constructed of sunken ships, the quarry rock is a stable organic medium that does not decompose over time."

McGee noted that crews are making significant progress on the expansion.

"As of the end of August, we have currently completed seven of the 22 total polygons, and are a little over 30- percent complete. We had some delays in mobilizing, due to rock sourcing and some final steps in the approval process; however, once mobilized, the project has been going very smoothly."

The reef will not affect waves or surfing, due to the low-relief nature of the design and the off-shore location. Many fishermen are drawn to the existing reef because of the habitat created, so there will likely be additional fishing spots opening up with the expansion of the reef.

Crews are performing the work in stages, with current activities winding down before resuming next spring. 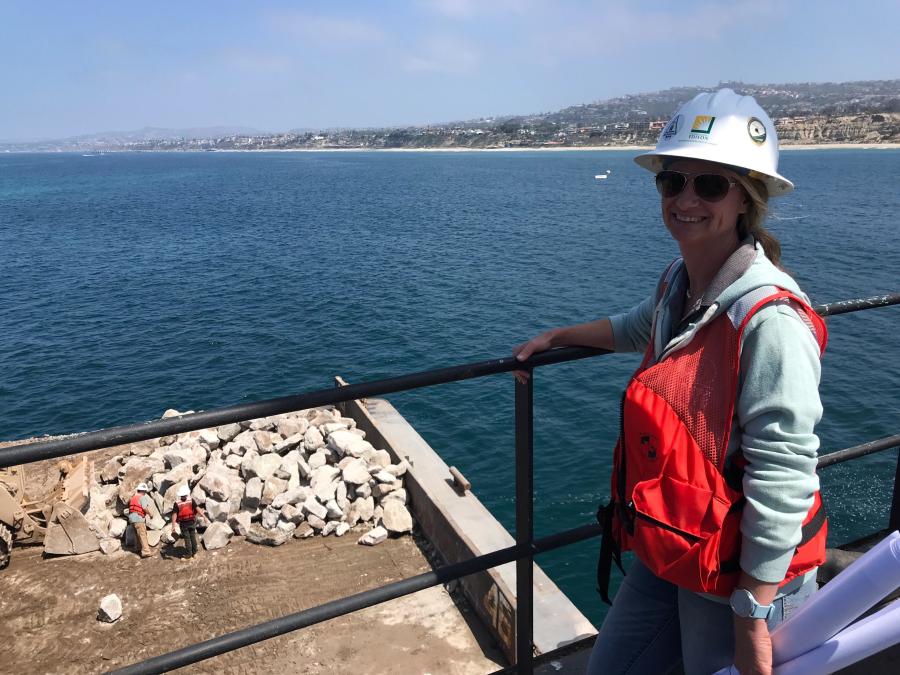 "We have to work within certain environmental parameters and the weather is a factor as well," said McGee. "In South Orange County, we are blessed with some of the best climate anywhere. That said, larger swells may halt work, but usually during the summer months we don't see a lot of bad weather, such as rain or high winds. We stop September 30, because October 1 is the start of lobster season."

The design, planning and permitting phase for the project lasted approximately 24 months. While the construction phase is not as extensive, there is a certain level of risk involved.

"There are inherent dangers associated with operating heavy construction, particularly in open water conditions," said McGee. "Scheduling transport of rock and coordination of quarry operations are also complex. The operations require a specialized company to perform the work."

For McGee, the construction of an artificial reef creating habitat of rich biodiversity in the local waters is a humbling responsibility, and an opportunity of a lifetime. She's particularly focused on joining contractors and specialists to ensure the team maintains environmental compliance throughout the construction phase.

"We are focused on completing this project safely," said McGee, adding, "We're now expanding a structure that will benefit marine life and the local communities for generations to come." CEG