Express Lanes Along I-77 Corridor to Open in Fall 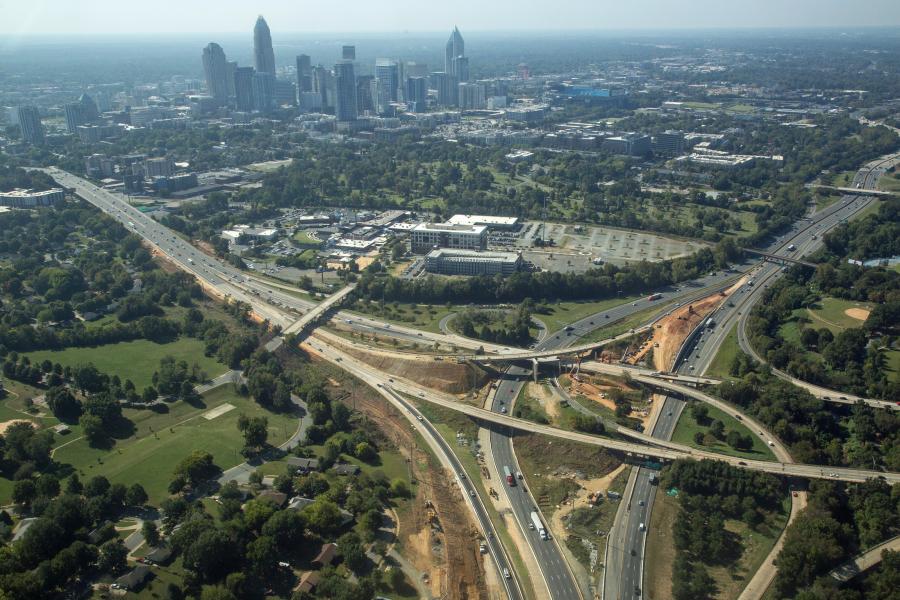 Since November 2015, commuters moving up and down the Interstate 77 corridor from uptown Charlotte north to the suburban community of Mooresville have resigned themselves to slogging through heavy traffic every morning and evening.

Since November 2015, commuters moving up and down the Interstate 77 corridor from uptown Charlotte north to the suburban community of Mooresville have resigned themselves to slogging through heavy traffic every morning and evening.

The north-south route has seen a tremendous amount of adjacent development in the last 25 years as the Lake Norman communities of Huntersville, Cornelius, Davidson and Mooresville have all become very popular places to live. Their growth has been part of the overall population increase of the Charlotte Metro area to around 2.5 million people.

As a direct result of that growth, it became apparent over the last few decades that I-77 needed more than just its current four lanes of capacity between Mooresville to Charlotte.

Right now, I-77 is made up of two lanes in each direction from Mooresville across Lake Norman, through Cornelius and into the southern part of Huntersville. From there south, three lanes of traffic on each side stretch to the interstate's intersection with I-85.

High Occupancy Vehicle (HOV) lanes have been in use just north of Charlotte in each direction for the last 13 years. In more recent times, though, as the number of cars and trucks through the area has increased, even those lanes were not enough to adequately handle the flow.

What was needed through the Mooresville-Charlotte corridor was at least one or two new inside lanes to move traffic moving efficiently.

So, after years of planning and public comment, the state of North Carolina and the city of Charlotte finally reached the conclusion that building new express toll lanes in the medians between the north- and south-bound lanes of the interstate corridor was the right solution.

Together, the city and the state Department of Transportation (NCDOT) envisioned an enterprise that would add the new lanes along a 26-mi. section of I-77.

The $648 million I-77 Express Lanes project is promising to provide more reliable travel times from the I-277/Brookshire Freeway (Exit 11) on the northern edge of uptown Charlotte to N.C. Highway 150 (Exit 36) in Mooresville. It also will include the building or replacement of almost two dozen bridges, overpasses and flyovers.

NCDOT also decided to construct the express lanes via a public-private partnership to help pay for the roadway's hefty price tag. By employing that method, the agency hoped the new roadway would be able to be built and opened quicker than if it were to be done solely with state funding. 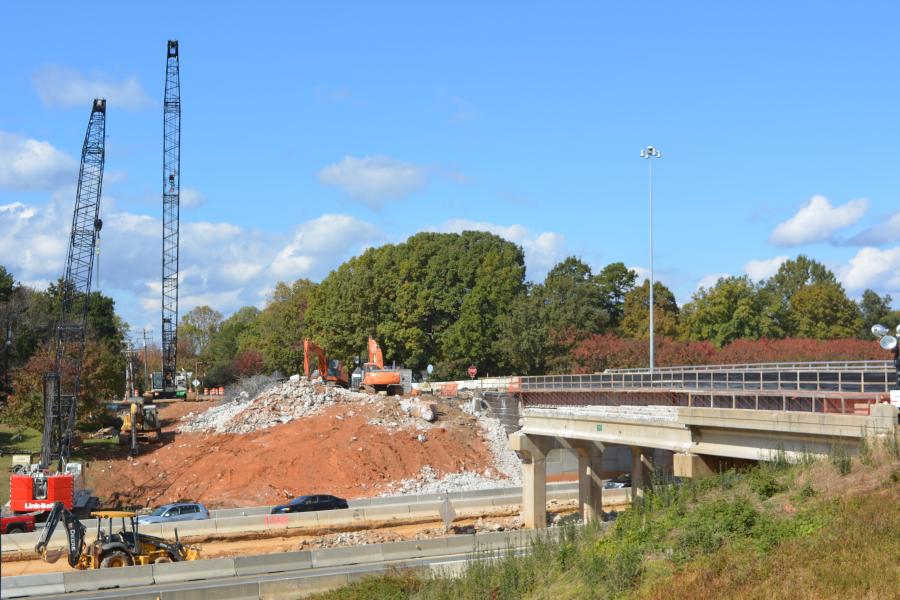 “We are working on two new lanes in each direction for the entire 26-mile project route, starting at the I-277 interchange all the way north to just above Exit 28 at Cornelius, at which point there is an express lane in each direction north to just past Exit 36,” said David Hannon, chief infrastructure officer of I-77 Mobility Partners. “Along the southern portion of the project, the current HOV lane each way will serve as one of the two new express lanes.”

Right now, I-77 is made up of two lanes in each direction from Mooresville across Lake Norman, through Cornelius to the southern part of Huntersville. From there south to Charlotte are three lanes each way.

The developers of the I-77 work frame it as an improvement that will provide motorists with a choice of how to travel the roadway between Charlotte and Mooresville.

“When complete, drivers will have at least eight opportunities to merge in and out of the express toll lanes based on the amount of traffic,” said Jean Leier, director of Corporate Affairs of I-77 Mobility Partners. “They will be able to decide if they want to use the express lanes, the general-purpose lanes or a combination of both to make their drive more efficient.”

All vehicles with three or more occupants, including the driver, and equipped with a transponder will be allowed to use the express lanes for free.

Expert Contractors on the Job

Sugar Creek Construction LLC is designing and building the roadway for I-77 Mobility Partners. It is a joint venture between FA (Ferrovial Agroman) Southeast and English Construction. The former is a preeminent designer and builder of infrastructure projects around the world; while English has proven itself to be an expert in highway and bridge construction throughout the Southeast and Mid-Atlantic states.

Currently, work is progressing along almost every mile of the route, according Hannon, as crews aim for the project's completion in November.

Earthmoving equipment has almost finished the grading work on the I-77 improvements, he added, but despite grumbles from motorists that the work hampers travel times, he said it was carefully staged to avoid that.

“We are not allowed to haul anything during the day or the rush hours, but we are still working in the median,” Hannon said. “We just cannot have trucks coming in and out of the site at those times. A good bit of our work does involve lane closures, but they are done overnight.”

As can be expected, a lot of the traffic congestion is nearest to uptown Charlotte and close to I-485, I-277 and I-85. Hannon said that “the northern edge of the project was a much simpler design, as it was mostly a median-widening, whereas at I-85, I-485 and definitely south of I-85 we have a mixture of inside and outside widening so the design took a little bit longer on that end.”

Bridge Structures Being Built, Too

Among the bridges over I-77 that have been or will be replaced as part of the project are at Griffith Street in Cornelius, Hambright and Lakeview roads near Huntersville, and Oaklawn Avenue in Charlotte. 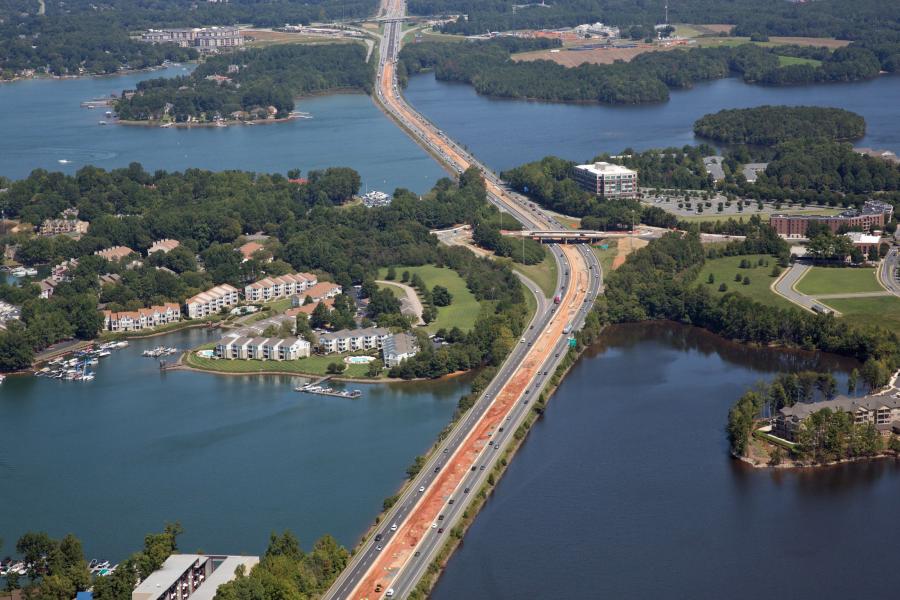 The contractors also built one bridge in each direction across a narrow, 150-ft.-long crossing of Lake Norman, near the Mecklenburg-Iredell county lines, but Hannon said that with the completion of their decks, it was merged into one wide road structure.

In addition, the contractors are reconstructing the I-277 westbound southbound ramps, along with overpasses at the I-85 interchange that are essentially single-level bridges.

Hannon said that most of the crane work on those structures is being handled by sub-contractors, but English Construction has elected to do some of that work itself.

As the weather warms, he predicts the I-77 Express Lanes project will hit its peak in 2018 as everything is finished off before the fall completion. Paving operations will ramp up in the spring and all the new entrance and exit points from the existing interstate to the express lanes will be perfected.