The contractor has a very aggressive schedule and has performed a lot of night work to lessen the impact to I-35 traffic during rush hour. 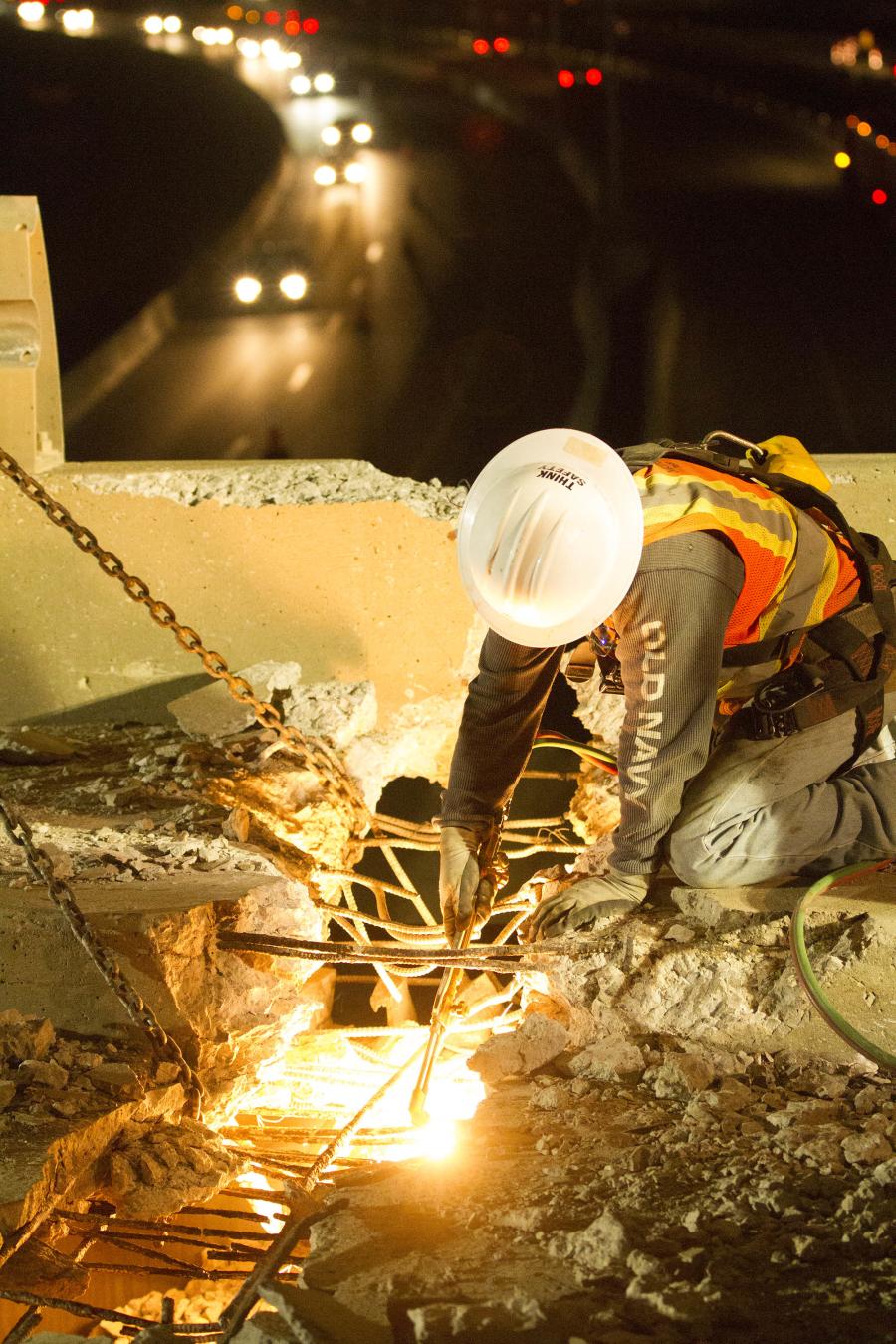 ODOT photo. Crews will reconstruct the I-35 and Lindsey Street interchange as a single point urban interchange featuring a wider bridge.

Crews are onsite in Norman, Okla., on a federally-financed project that includes, widening I-35 from four to six lanes, reconstructing interchanges at SH-9 East and Lindsey Street and building new on-ramps and off-ramps. Workers will reconstruct the north half of the I-35 and SH-9 East Interchange with new ramps and connect Ed Noble Parkway from Lindsey Street to SH-9 East.

Braided ramps will be constructed to reduce merging conflicts.

They will reconstruct the I-35 and Lindsey Street interchange as a single point urban interchange featuring longer on-ramps and off-ramps and a wider bridge. A single array of traffic signals will be built on top of the bridge to allow large volumes of traffic to negotiate the area.

Crews also will erect a sound wall and retaining walls along the I-35 construction site.

I-35 will be widened from south of Main Street to the South Canadian River, completing a larger project to widen the highway from Oklahoma City to Norman.

As part of the project, the city of Norman is partnering with the Oklahoma Department of Transportation to construct a drainage structure and add artwork and landscaping to the new Lindsey Street bridge to reflect the Cherokee Gothic style of architecture at the University of Oklahoma.

About $4 million in local funds from the city of Norman will pay for bridge aesthetics and construction of a drainage structure.

Construction on the I-35 project started in March 2015 and work is expected to conclude in spring of 2017.

Sherwood Construction Co. Inc. of Tulsa is contractor for the project.

“The first phases to reconstruct the SH-9 east interchange are mostly complete,” said Cody Boyd, public information officer at the Oklahoma Department of Transportation. “The work on SH-9 east also included construction of a new drainage structure funded by the city of Norman, which was done concurrently along with other work.”

Boyd said construction was phased to ensure that SH-9 could act as the detour for the Lindsay Street interchange. That interchange was closed this spring and will remain closed until early 2017.

“The contractor removed the old Lindsey Street bridge and is currently working on construction of the new single-point urban interchange and tying the ramps in with nearby SH-9 east interchange,” Boyd said.

“Reconstruction and widening of mainline I-35 is also being done concurrently with the two interchanges,” he said.

Two lanes of northbound and southbound I-35 will remain open to traffic in each direction during construction, as well as most on-ramps and off-ramps. However, some nighttime lane and ramp closers are planned.

“The major impact to the community is the closure of the Lindsey Street interchange for reconstruction,” Boyd said. “Lindsey Street is a major commercial corridor, so detouring traffic to SH-9 east and back to Lindsey Street is a challenge. Fortunately, ODOT and the city of Norman have worked closely together on this project to keep the public informed and preserve access to business.”

Drivers can expect congestion and delays on I-35, especially during morning and evening rush hour. To avoid traffic, they can use U.S.-77 and SH-77H (Sooner Road) as detour routes.

“The contractor has a very aggressive schedule and has performed a lot of night work to lessen the impact to I-35 traffic during rush hour,” Boyd said. “Some of the work, including the removal of the old Lindsey Street bridge and hanging of new bridge beams over I-35, requires night work since the interstate must be intermittently closed by rolling roadblock.”

The Oklahoma City metro area has experienced significant growth along the I-35 corridor south to Norman and beyond. In 1979, ODOT began widening I-35 to six lanes from downtown Oklahoma City to the South Canadian River in Norman and this project completes that effort.

More than 155,000 vehicles travel I-35 in the Norman area daily. I-35 and the interchanges at Lindsey Street and SH-9 east were originally constructed in 1967.

They have exceeded their design life and traffic capacity, Boyd said.

He added that safety will be improved with the project.

“The ramps at Lindsey Street and SH-9 east did not meet current design standards and interchanges could not handle the traffic demand,” Boyd said.

The project will increase capacity in a very congested area and improve interstate access. Reconstruction of the SH-9 east interchange included a connection to the Ed Noble Parkway on the west side of I-35, providing new access to a major retail and entertainment area of Norman.

“Heavy rains in May and June 2015 caused some flooding in the work zone and the unusually wet summer slowed the pace of work on SH-9 east,” Boyd said. “This isn't expected to significantly delay completion of the project.”