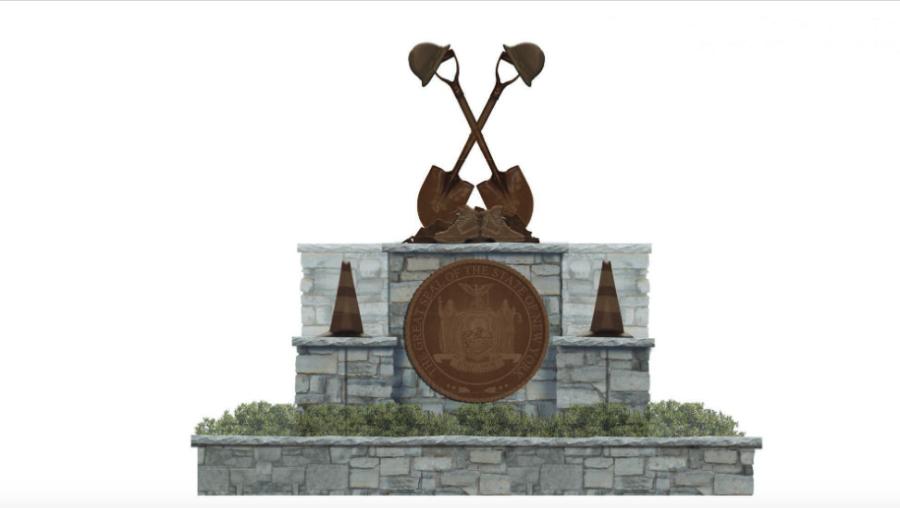 The new memorial at the state fairgrounds will include a centerpiece featuring a bronze sculpture of shovels, hard hats and boots on a platform surrounded by four bronze traffic cones and a dedication plaque.

A new memorial to honor highway workers who have died while building or improving New York State's roads and bridges is currently being built at the site of the 2021 State Fair in Syracuse.

The new tribute, announced July 15 by Gov. Andrew Cuomo, was designed to "honor all transportation workers killed while performing their job duties on or near New York's thousands of miles of highways, including State Department of Transportation (NYSDOT) and Thruway Authority employees, municipal highway workers, contractors, consultants and towing service employees," according to a news release from the governor's office and posted on the fair's website.

"These hardworking and dedicated New Yorkers routinely put their personal safety on the line to build our bridges, pave our roads and maintain a safe, reliable infrastructure, so that all New Yorkers can reach their destinations as safely as possible," Cuomo said in the statement. "We are grateful for the work that these women and men perform year-round and this new memorial, which will be ready in time for the 2021 Great New York State Fair, will serve as a lasting tribute to all the workers who lost their lives while performing their duties."

From 2003 to 2017, 1,844 workers lost their lives on road construction projects nationwide — an average of 123 per year, according to the U.S. Bureau of Labor Statistics. The NYSDOT alone has lost 56 workers during its existence.

The new memorial at the state fairgrounds will include a centerpiece featuring a bronze sculpture of shovels, hard hats and boots on a platform surrounded by four bronze traffic cones and a dedication plaque. Bordering it will be paved walkways and seating for visitors to pay their respect. Natural plantings and trees will be arranged around the centerpiece and on the memorial's perimeter to lend a sense of peace.

In 2006, Patrick Mapleson, a highway maintenance worker for NYSDOT, was struck and killed by a distracted driver while working along the Sunrise Highway in Eastport. Since then, his daughter, Karen Torres, has traveled across the state, sharing the story of her father's death with driver education classes, school assemblies, peer leadership programs, church groups, rotary clubs and corporate organizations.

"My hope is when people visit the memorial, they will give a moment of silence not only to the brave men and women who have lost their lives, but to the families who continue to grieve their loss," she said.

Cuomo's announcement also comes at a time when New York State Police and local law enforcement agencies are writing tickets in record numbers to crack down on motorists who flagrantly disobey vehicle and traffic laws in highway work zones as part of Operation Hardhat.

In 2020, the state police issued 1,770 tickets as part of the initiative, surpassing 2019's total by nearly 70 percent. Troopers this year have already handed out close to 900 citations in highway work zones on state roadways, according to the release.

"DOT employees are members of our family, and they risk their lives daily," explained Marie Therese Dominguez, commissioner of the NYSDOT.

"We are forever grateful to the women and men who construct, operate and maintain our roadways and this new memorial is a lasting tribute to the many highway and transportation workers who died protecting the public while keeping our roads and bridges safe. More than that, it represents an opportunity to reach hundreds of thousands of people who visit the fairgrounds — making them aware that their failure to pay attention while driving has real life and death consequences.

"It cannot be said enough: when you're driving, especially through a highway work zone, put down your phone, keep your eyes on the road, slow down and please, pay attention," she added. "People's lives depend on you and your actions."

Her thoughts were echoed by Thruway Authority Executive Director Matthew J. Driscoll when he said, "We will forever remember and honor our highway workers who sacrificed their lives while doing their jobs for the betterment and safety of all drivers. This new memorial is a stark reminder of the dangers our roadside workers face every day. I encourage all fairgoers to visit this memorial and pause to remember the sacrifices these men and women have made."

The governor's press release noted that NYSDOT works year-round to enhance safety for its workforce. Portable rumble strips that precede work zones and prevent distracted driving are being utilized in every part of the state for maintenance and contractor project work zones to better protect flaggers and workers. Cameras also are being deployed in those areas to better protect transportation workers.

For its part, the Thruway Authority in 2021 is deploying more than a dozen new trucks throughout its four maintenance divisions across the state featuring enhanced technology — all focused directly on improving work zone safety. These vehicles include large radar board displays that alert motorists of the work zone speed limit compared to their approach speed, directional arrows, traffic attenuators and wider reinforced man buckets with swing gates to allow for easier and safer deployment or removal of cones and barrels.

"The New York State Police are committed to keeping our roadways safe for those who travel them, and for those who work on them," said NYSP Superintendent Kevin P. Bruen. "Through education and enforcement campaigns like Operation Hardhat, we are working to ensure our highway workers are able to go home to their families at the end of the workday and protect motorists as well. Drivers should follow the rules of the road, including work zone speed limits and move over when they see flashing lights. The choices you make behind the wheel can have serious, even deadly consequences. Make the right choice."

Ron Deming, a Thruway Authority maintenance employee, was fatally injured while assisting in the recovery of a passenger car along the shoulder of Interstate 90 in 2016. Almost five years later, his wife, Sally Deming, continues to be outspoken about the importance of the Move Over law and the impacts work zone incidents can have on workers' families.

"It's been nearly five years since Ron's death," she said in the press release from the governor's office. "That is five years of laughs, moments and memories that we will never get back. Ron never got to meet his grandson or enjoy retirement with his family. I am thankful for this new memorial, and it is a reminder that all roadside workers want to go home to their families each night. Sadly, not all have been so fortunate." 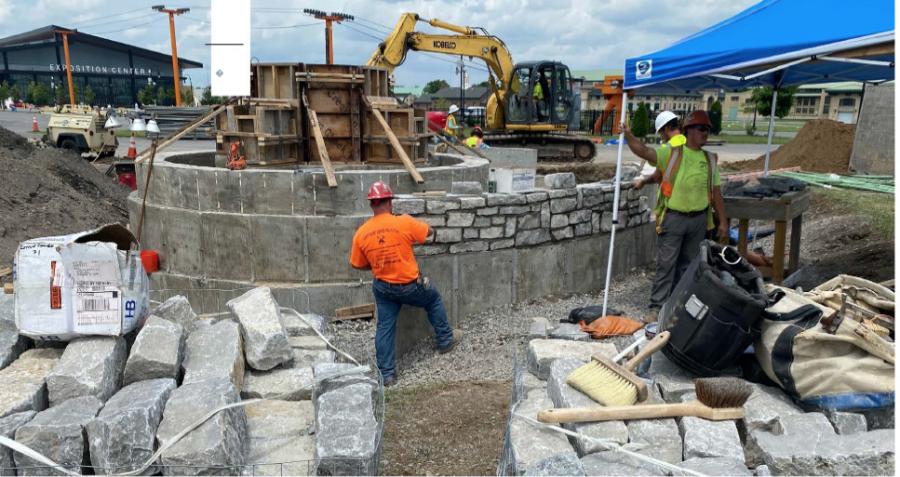