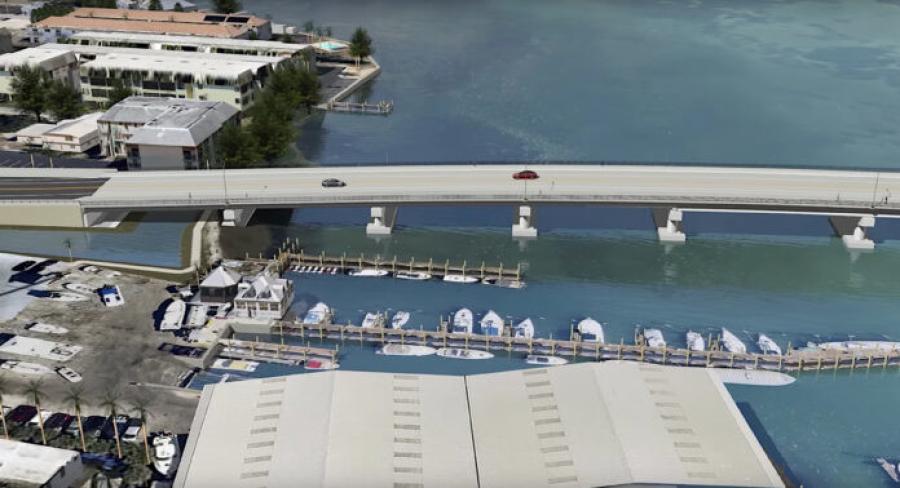 In 2018, FDOT provided this illustration that details what the new Cortez Bridge will look like on the Bradenton Beach side. (FDOT rendering)

During the Jan. 21 Bradenton Beach Commission meeting, Mayor John Chappie said that at the previous day's Island Transportation Planning Organization (ITPO) meeting, an FDOT representative informed ITPO members that the transportation department was able to include the Cortez Bridge construction project in its five-year work program.

When contacted by The Sun the first week in February, FDOT spokesperson Brian Rick confirmed Chappie's statement in an email.

The transportation department has been preparing for construction since Oct. 10, 2019, when the FDOT released a project development and environment study and announced plans to move forward with right-of-way acquisition and bridge design. At that time, ROW acquisition — the process of acquiring property for the bridge — had a price tag of $8 million with a scheduled completion date of 2025.

Design is ongoing and the DOT will be submitting Phase II plans by about August, Rick wrote in his email to The Sun.

The design cost is about $7 million.

Construction should begin in fiscal year 2026, noted Rick, adding that funding is expected to be available at that time.

The original anticipated bridge replacement project cost was $66.5 million, but Rick noted in his email, "As a caveat, $66.5 million is the present-day cost, but with inflation, it will be $76 million by 2026."

FDOT continues to move forward with its bridge replacement plans despite opposition from some in the community who would rather see a new 35-ft.-tall drawbridge to replace the existing drawbridge instead.

In 2018, FDOT issued a press release regarding its then-recent bridge design decision.

"A fixed bridge is resoundingly the best financial investment for taxpayers. The initial construction cost, including design and construction, saves approximately $23.9 million compared to a new mid-level drawbridge. Over the 75-year life of the bridge, the fixed bridge also saves approximately $11.2 million in operating and maintenance costs compared to the [smaller bascule bridge]," according to the FDOT press release.

Located on Cortez Road/FL 684, the bridge spans the Intracoastal Waterway between Cortez on the mainland and Bradenton Beach on Anna Maria Island along Florida's Gulf Coast.