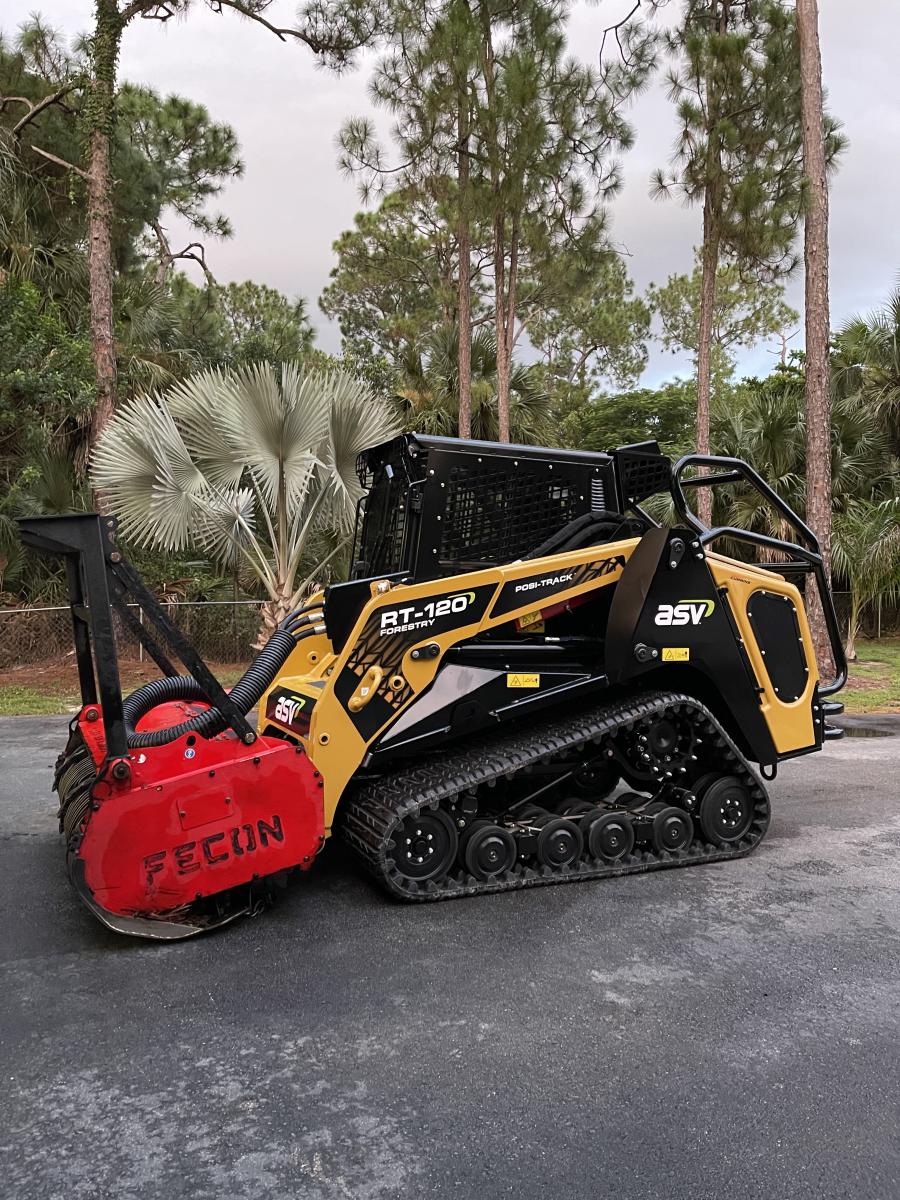 D & S Land Management has been operating a Kubota SVL95 with a Fecon BH74DCR mulcher attachment for two years. It has found this to be much more efficient than manually cutting down invasive species with machetes and chainsaws.

Many local ordinances preclude the start of construction until all invasives are cleared from the property. That has fueled the growth of D & S Land Management, a mulching contractor that specializes in invasive species removal based in Naples, Fla.

Invasive species removal can be an arduous and difficult problem to deal with. Large shrubs and trees taking root and spreading out across a plot of land can take a team of people with machetes and chainsaws all day to cut down.

One alternative to cutting down the invasive species is to uproot it. However, this is often easier said than done and requires a grapple or root rake to rip the root system from the ground. For some species, like the Brazilian Pepper, this works quite well. The Brazilian Pepper has a large amount of underbrush connected to one very small root system. Once this is uprooted, however, there is still a very large volume of brush to deal with.

Simply hauling off all the tree limbs and brush can be cumbersome and expensive. Large limbs take up more space and thus need more trucks to haul them all off. Uprooted bushes take up the most space, and can really cut into profits, especially with rising costs of hauling and dumping.

With all these challenges, invasive species removal can be difficult for a company to handle. However, Douglas Clarke and Scott Simmons of D & S Land Management have found their solution in the form of the Fecon Bull Hog mulcher with a depth control rotor.

D & S Land Management has been operating a Kubota SVL95 with a Fecon BH74DCR mulcher attachment for two years. It has found this to be much more efficient than manually cutting down invasive species with machetes and chainsaws.

According to the primary machine operator, Scott Simmons, "For a half-acre, it would take a group of four guys with machetes and chainsaws about a day and a half to cut it all down. With the mulcher, I can do the same area in four to six hours, tops."

Clearing an area in less time, and with less labor, means a substantial cost savings and a safer work environment. This savings is increased even more when you factor in haul off costs.

A team of men cutting down a half-acre worth of invasive species would still need to do something with the tree limbs and other detritus they cut down. Mulching to clear the area has the added effect of leaving behind a nice carpet of mulch. On existing residential lots, where homeowners are cleaning up or reclaiming their property, this is left as is, which eliminates haul off costs. For new construction, though, the wood chips are raked into piles and hauled off in much more compact piles, which allows for much cheaper haul off costs.

"I'd say we're cutting about half the cost on being able to mulch it down, so it actually compacts in the dumpsters better. We're doing all of our small stuff that way, all of our quarter-acre, and half-acre lots.

"I'm saving a lot of time and a lot of money on haul-off because it's not making such a large pile and we're able to fit more stuff in fewer containers. We'll mulch the entire thing and like I said, scrape up all the mulch and all the roots and it makes it way easier for haul-off," said Simmons.

This is especially important with rising costs of hauling and dumping. Invasive species can be very costly to haul off without mulching.

"Brazilian pepper is very limiting on how much you can actually fit in a grapple truck. I've had quarter acre lots where you've got seven, eight, nine grapple trucks. You're talking about almost $3,000 to $4,000 in haul off if you don't mulch it down first. However, if I come in and I Fecon everything, I can usually have a quarter acre lot that normally would take eight grapple trucks hauled off in two," said Clarke.

The DCR rotor is particularly helpful to this process. The depth control rotor limits the bite that the mulcher can take. By reducing the size of the bite, it ensures finer mulching, leaving a much nicer carpet of mulch in its wake. This can lead to less cleanup time after mulching to make it look good. The smaller bite also limits the horsepower needed.

The shape of the rotor was specially engineered with material flow in mind to ensure energy is efficiently used for production. The BH74DCR has a 61-in. working width and includes 24 double-sided Viking knives, which are ideal for the fibrous materials encountered in south Florida's never-ending growing season.

Clarke estimates that D & S gets about 60 to 100 hours out of each side of the Viking knives. Bolt-on skid shoes made of AR400 steel mean there is less plowing of material and a more uniform end product. A push bar helps to topple standing trees. When all these aspects come together, it allows for much more production.

Clarke and Simmons have been running their Fecon FM74DCR on a Kubota SVL95, which delivers up to 40 gpm hydraulic flow to the Bull Hog. They recently purchased an ASV RT-120 to run the Fecon. With 120 hp engine and 45 gpm of hydraulic flow at 4,060 psi, the added power is shredding invasives faster than ever, so that Simmons can get to the next project, he said.

The company transports everything, including the loader, Bull Hog, a grapple, bucket and transfer tank, on a 25 plus 5 Diamond C trailer pulled by either an F350 flatbed dually single cab, or an F250.

According to Clarke, "That Diamond C is the bee's knees."

Simmons is the main operator of the equipment, and usually brushes the teeth of the Fecon BH74 DCR with a flap wheel every two to three hours to keep them sharp. The DCR is equipped with double sided Viking knives, and according to Clarke, they get about 200 hours of machining time out of a set of them. They enjoy a steady diet of invasive species, keeping them out of the dirt and sandy soil helps to prolong their service life as well.

Eliminating the invasive species before construction starts is a great idea, as that is when the area is most open and available to mulchers or hand work crews. As the team at D & S Land Management have learned, the former is much faster, safer, more profitable, and overall, more efficient than the latter. And with plenty of construction and invasive species in south Florida efficiency is the name of the game.