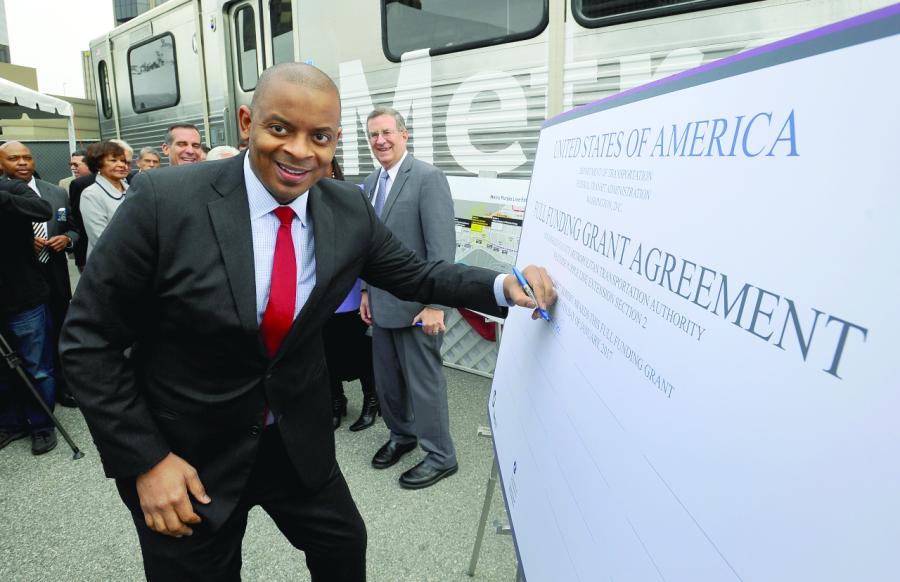 When people think of Los Angeles, they often think of the glitz and glamor of Hollywood — but also of crippling traffic, delays and pollution in the nation's car capital.

In recent years, LA's citizens and leaders have come together around a new vision. A new vision that includes new subways, light rail, rapid buses and other multimodal transportation investments.

I joined community leaders at the site of a future subway station in the Century City neighborhood of Los Angeles to make a major announcement: more than $1.6 billion in new federal funding for the Purple Line Extension Phase 2, which will bring two new stations to LA's Westside.

The funding will come in the form of a $1.187 billion construction grant agreement through the Federal Transit Administration's Capital Investment Grant program, a loan for up to $307 million through DOT's Transportation Infrastructure Finance and Innovation Act (TIFIA) program, and $169 million through the Congestion Mitigation and Air Quality program.

The Purple Line Extension project will bring underground rail service to some of the area's busiest corridors, helping residents and visitors get around without getting stuck in traffic. USDOT has already supported Phase 1 of this extension, which is now under construction, with a similar package of construction grants and a TIFIA loan.

Phase 2 will bring underground rail service to Century City, the Golden Triangle, and Beverly Hills — a key part of LA's “second downtown” and one of the most densely populated places in the country.

Thanks to the Purple Line, frustrated Angelenos will have a safe, rapid alternative to persistent congestion along Wilshire Boulevard, where city buses often struggle to make it through crowded streets.

In fact, it takes a bus more than an hour to travel the route of the Purple Line extension. A subway ride will cut that down to around 25 minutes — even at rush hour.

That's a monumental difference for the tens of thousands of people who travel to and from Westside neighborhoods every day to get to job centers, schools, medical care and back home again.

The Purple Line extension is a powerful example of the transformation that LA is undergoing.

Over the past eight years, the Obama Administration has been proud to support that transformation through major investments like the Regional Connector and Crenshaw/LAX Line, as well as projects that improve Ladders of Opportunity, workforce training and transit-oriented development in Los Angeles.

We've been able to undertake these important projects thanks to the good work of the Los Angeles Metro board and staff, strong support from local leaders like Mayor Eric Garcetti, and the willingness of Los Angeles County residents to invest in transportation through initiatives like Measure R and Measure M.

Perhaps it's appropriate that we made this announcement at the intersection of Constellation Boulevard and Avenue of the Stars. At its heart, Los Angeles is a place of optimism, where the stars and the future are bright.