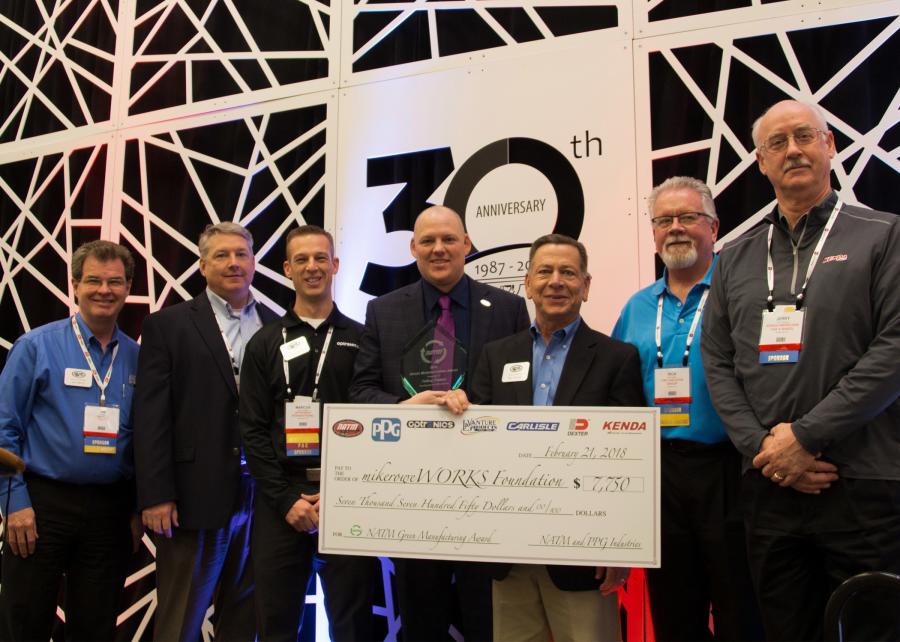 Felling selected the mikeroweWorks Foundation as the recipient of the Green Award monetary donation.

Felling Trailers Inc. was presented with the 2018 Green Manufacturing Award this past February at the NATM Conference (National Association of Trailer Manufacturers) in Fort Worth, Texas. NATM's Green Manufacturing Award was established to recognize manufacturers that have made significant contributions towards improving their environmental impact within their manufacturing processes and facilities. The award celebrates environmental awareness and protection, as well as the business opportunities created therein.

Over the course of several years Felling Trailers Inc. has made the reduction of its environmental footprint a prime focus in the operation of its company. It has done this by setting initiatives in place to maximize energy efficiency and minimize waste. The most recent initiative achieved was obtaining ISO 9001:2015 Certification for its quality management system.

Felling took steps to maximize energy usage by upgrading lighting systems from the use of metal halide bulbs to T8 fluorescent bulbs.

“The benefits of the T8 greatly out weight the transition cost from the metal halide,” said Paul Radjenovich, Felling's VP of operations. The T8 fixtures use one-quarter of the electricity of the previous metal halide fixtures, have 30 percent less light loss, and provide 40 times longer life expectancy. Better lighting, better work environment, the T8 also provides a higher color rendering index (CRI) of 85 compared to the 65 to 70 that the metal halide bulb provides. The higher CRI makes objects and surfaces in a room appear more as they would under natural lighting, increasing the eye's ability to see contrast, detail, and reducing eyestrain. This not only creates a positive environmental impact, but also saves the company significantly in operational costs, according to Felling..

The company implemented a partnership with Stericycle, a waste management solution provider, whose services handle pick-up and proper disposal of liquid paint waste, fluorescent light bulbs, metal halide bulbs, and oil absorbent rags to ensure environmental safeguarding, protection of people, and organizational compliance. In the period of one year, nearly 8,000 gallons of paint waste was reused as fuel in cement kilns, 165 gallons of paint waste was considered waste-to-energy and 500 light bulbs were recycled.

Air quality plays a significant part in employee comfort, safety, and performance in a manufacturing environment. Felling recognized this and put into motion their air quality initiative. The company invested in ventilation systems that capture welding fumes and gases at their source and remove them from the worker's breathing zones. The captured air is then filtered through a high-efficiency canister filter with a 99.9 percent efficiency rate, exceeding OSHA requirements. Felling's blast booth also is equipped with its own air filtration system that not only filters the air but returns it to the welding shop floor helping to maintain the heat of the manufacturing area and better regulate the temperature.

“Our work environment has improved dramatically over the years, not only the air quality but lighting and temperature control as well. The air exchangers allow us to maintain a higher room temperature in the winter by not sucking out a majority of the heat with the dirty air,” said Lyle Mader, special projects coordinator at Felling Trailers.

Felling also implemented a system that utilizes heat produced from the compressor room that houses four large compressors. The system is configured with two modes: summer and winter. In winter mode, the warm air is pulled, filtered and pushed into the drying room supplementing the heat that would otherwise be produced via radiant gas heat from the ceiling. In the summer mode, the warm air is pulled, filtered and pushed outside. The company also took steps to reduce the amount of hazardous air pollutants by using a new paint vendor that offers paint with only 4 percent of the pollutants found in its previous paint.

Along with the award from the National Association of Trailer Manufacturers, there is a cash gift that is directed to a charitable organization of the recipient's choice. Felling selected the mikeroweWorks Foundation as the recipient of the Green Award monetary donation. As part of its efforts to debunk myths about the skilled trades and help close the skills gap, the mikeroweWORKS Foundation provides scholarships to qualified individuals willing to learn a trade that is in demand. Since its inception, the Foundation has granted, or helped facilitate the granting of, more than $5 million in technical and vocational education in the United States.

“As an industry and company who relies heavily on the skills that result from trade schools, Felling Trailers Inc. proudly selected mikeroweWORKS Foundation to receive our Green Award donation. We are grateful to the other vendors who contributed to this cause as well,” said Brenda Felling Jennissen, president/CEO of Felling Trailers Inc.

For more information about Felling Trailers, call 800/245-2809 or visit www.felling.com.