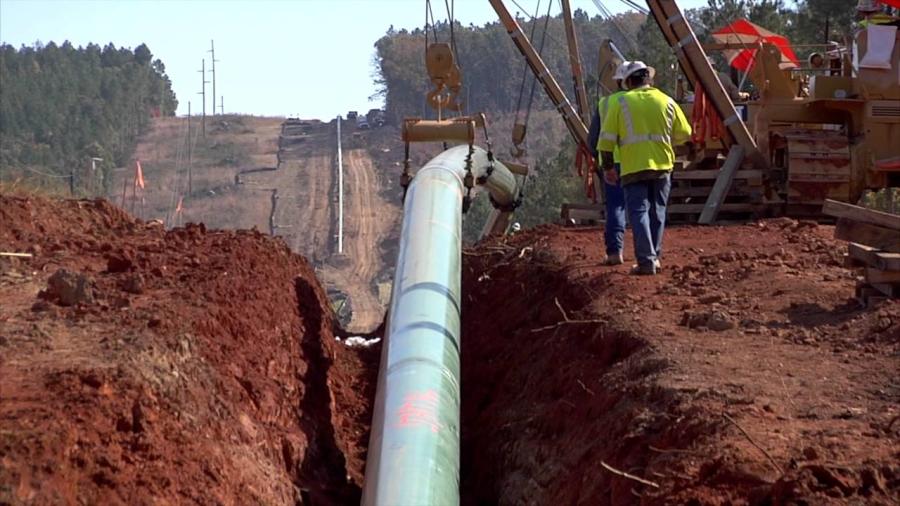 The assessment said that if developers use proper construction and mitigation techniques, most of environmental impacts could be reduced to "less-than-significant" levels.

The Atlantic Coast Pipeline intended to carry natural gas across West Virginia, Virginia and North Carolina would have some adverse environmental effects, including impacts on water resources, forest and other habitats, but most could be reduced to insignificant levels, an assessment by federal regulators found.

The Federal Energy Regulatory Commission, which oversees interstate natural gas pipelines, released its final environmental impact statement Friday for the proposed 600-mile (965-kilometer) pipeline, which has broad support from political and business leaders but is staunchly opposed by environmentalists and many affected landowners.

The assessment is a major milestone in the approval process for the project that will cross hundreds of bodies of water, mountainous terrain, national forest, and the Appalachian Trail. Its findings were largely favorable for developers.

The impact statement did find that construction in steep terrain could increase the potential for landslides and that the project was likely to adversely affect seven species protected under the Endangered Species Act. It found that the greatest impact on vegetation would be on forested areas, with more than 3,400 acres having long-term or permanent effects.

But overall, the assessment said that if developers use proper construction and mitigation techniques, most of environmental impacts could be reduced to "less-than-significant" levels.

The leading company behind the project said FERC's assessment "provides a clear path" for final approval later this year.

"While some impacts on the environment and landowners are unavoidable with any infrastructure project, the report demonstrates that we've taken all necessary steps to minimize those impacts and balance them with the urgent public need for the project," Leslie Hartz, Dominion Energy's vice president for engineering and construction, said in a statement.

Environmental groups, which argue that FERC's approval process is inadequate and biased in favor of pipeline developers, criticized the assessment, saying it glossed over important environmental impacts.

"Regardless of FERC's decision, the Atlantic Coast Pipeline is not a done deal. Far from it," said Lew Freeman, director of the Allegheny-Blue Ridge Alliance, a coalition of community groups and legal and technical experts who oppose the pipeline.

He pointed out that state level water-quality permits are still pending. Legal challenges have also been filed, and more could come.

Initially proposed in 2014, the underground pipeline, parts of which would be 42 inches in diameter, would be capable of delivering up to 1.5 billion cubic feet of fracked natural gas from the Utica and Marcellus shale deposits per day to customers in Virginia and North Carolina.

It would originate in north-central West Virginia, cross Virginia's Shenandoah Valley and run south of the Virginia capital of Richmond to a compressor station near the North Carolina border. An extension would run to the Hampton Roads area along the coast while the main pipeline would continue into North Carolina, ending near the South Carolina line.

Pipeline proponents — including union leaders, economic development officials and top lawmakers of both parties in all three states — have said it would deliver cheap and abundant energy that is cleaner than coal.

"The ACP will be built and operated in an environmentally responsible manner, and it will bring much needed American energy to Virginia consumers," Republican leaders of the Virginia General Assembly said in a statement.

Developers have also promised construction alone would create will create 17,000 new jobs and $2.7 billion in economic activity across the region, and once the pipeline is operational, they say the reliable supply of natural gas will attract heavy manufacturers that have previously passed over Virginia and North Carolina.

EnergySure, a coalition of individuals, businesses and organization in the three states, called the project "a once-in-a-generation opportunity to revitalize our region's manufacturing economy."

Opponents, however, say the pipeline would infringe on landowners' property rights, damage pristine areas and commit the region to a fossil fuel just when global warming makes it essential to invest in renewable energy instead. They also argue the demand for gas has been overstated and the capacity of existing infrastructure has been underestimated by developers, who are guaranteed a financial return on the project.

"FERC still hasn't addressed the most basic question hanging over this project: Is it even needed?" Southern Environmental Law Center Senior Attorney Greg Buppert said in a statement. "It's FERCs responsibility to determine if this pipeline is a public necessity before it allows developers to take private property, clear forests, and carve up mountainsides."

FERC's commissioners will weigh the environmental impact statement as well as whether the project meets a public need and whether its proposed gas rates are just and reasonable in making a final decision on whether the pipeline can proceed, according to spokeswoman Tamara Young-Allen.

Ordinarily, a final decision can come any time after a pipeline's final environmental impact statement is complete, but the five-member panel currently lacks a quorum, with only one commissioner currently serving.

President Donald Trump has announced four nominees, who still must be approved by the Senate.

In addition to Dominion, the pipeline is being developed by Duke Energy, Piedmont Natural Gas, and Southern Company Gas. It is estimated to cost between $5 billion and $5.5 billion to construct.