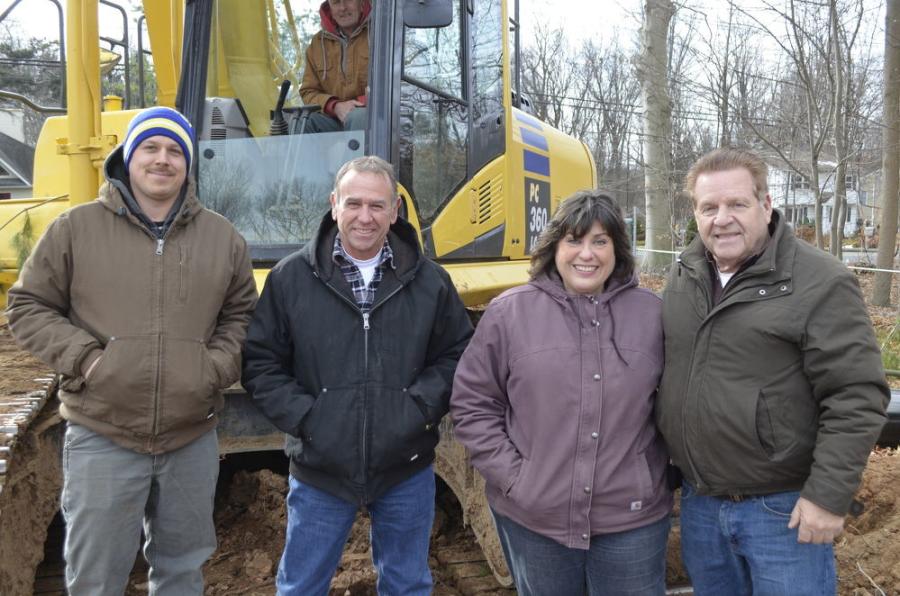 In the case of Victor P. Zugibe Inc. and Pine Bush Equipment, the relationship is the same.

Victor Zugibe already owned a gas station and a sporting goods store when he started a construction company in 1968. His first pieces of equipment were a Case dozer and Case loader backhoe that he purchased from Pine Bush Equipment.

“We hit it off really well right away,” Boniface said. “Victor saw an opportunity in the construction business and he also had a passion for hunting and fishing. That gave him and me a lot in common. Nearly 50 years and three generations later almost every piece of equipment in the Zugibe fleet, which is made up predominantly of Komatsu machines, were purchased from Pine Bush Equipment.”

By the early 1970s Victor Zugibe II, who had no interest in running a gas station, had joined his father's firm and the focus was on growing the excavation business.

The relationship between Zugibe II, Boniface and Pine Bush Equipment continued to grow.

In 1973, two manufacturers entered the U.S. market — Komatsu and Kubota. Pine Bush Equipment was one of the first dealers in the United States to pick up each of these accounts, and shortly thereafter, Victor P. Zugibe Inc. started populating its fleet with Komatsu machines, the first being a Komatsu PC200 excavator.

Through the '70s and into the mid '80s, Victor Zugibe Inc., under the guidance of Zugibe II, continued to grow with a focus primarily on smaller site clearing projects and underground utility work.

“In 1987, we were working a utility project and the frost had started to settle into the ground and we were having a hard time breaking through with our PC200 series excavators,” Zugibe II said. “Ken very wisely suggested to me that we try a PC300 excavator that Pine Bush Equipment had in inventory. We used the machine and I could not believe the difference. We purchased the PC300 and that was our stepping stone into moving up to bidding bigger projects.

Victor Zugibe III is now making his presence known in the company.

“I started working for dad in the summers when I was in the sixth grade,” he said. “It may have actually been younger than that. I do know that somebody reported dad for violating child labor laws and he had to explain that he wasn't hiring kids, I was a family member.”

Ken Boniface also grew up in a family business: his parents Edward and Dorothy Boniface purchased Pine Bush Equipment in 1956.

“At age 12, I had two paper routes,” Ken Boniface said. “I would start each day at about 5 a.m. before the paper route, stoking up the coal furnaces to warm up the shops at the store and I would come back and work in the shop after school. At that time, we were a Case and Oliver farm tractor dealership. There was still quite a bit of agriculture in our area.

Ken's daughter Karie has followed in her father's footsteps. She started out working in the parts department at Pine Bush Equipment, progressed to sales and today does sales and parts and service, and now handles the equipment purchase needs at Victor Zugibe Inc., working hard to emulate the sales and relationship building skills that her father has instilled in her.

Victor Zugibe III who now works closely with Karie said, “Our fleet is entirely Komatsu and I don't see that changing. The Komatsu equipment is reliable, powerful, and operator-friendly. But, most importantly, Pine Bush Equipment always gives us a good deal and after the deal they are always there when we need them.

“I have called Karie as late as midnight with a problem and have her or a mechanic on site with a solution the first thing the next day. I can think of several examples where Pine Bush Equipment has gone to bat for us with the manufacturers that they represent. Fighting hard for warranty claims and making sure that we are always treated right.”

“I think of [Ken and Karie] as friends and family first, who happen to satisfy our equipment needs. We have been in situations with both Ken and Karie where we have really needed their help and I have seen them go as far as pulling parts off of other machines in their inventory to minimize our downtime until required parts come in.”

Victor P. Zugibe Inc. currently is working in Suffern, N.Y., on an 18-acre senior living housing development. The company is doing all of the infrastructure, including grading, drainage, sewer and water on the $3.5 million project.

In addition to site development work, the company also has diversified into municipal work throughout the lower Hudson River Valley.