The highly anticipated building will employ the latest in design elements, along with environmental efficiencies, life cycle cost considerations and teaching technologies. 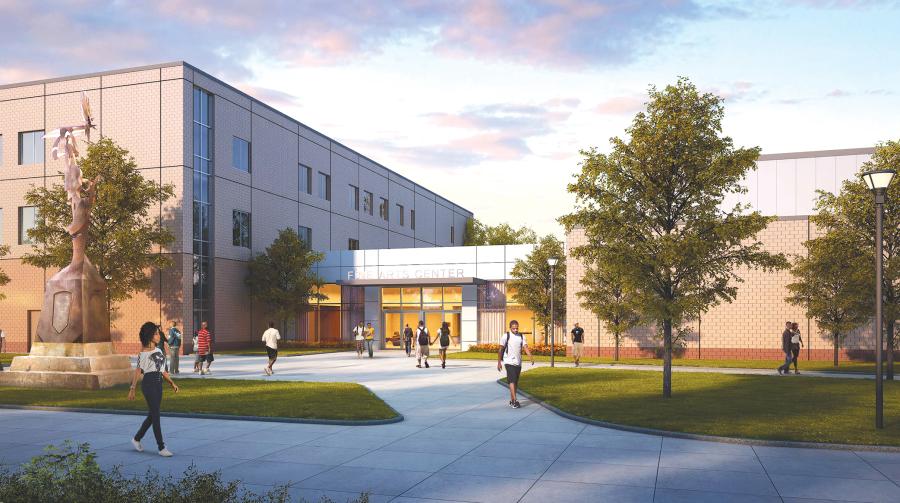 A rendering of the completed Fine Arts Center at Albany State University.

After years of planning and negotiations, work has finally begun on the $25 million Fine Arts Center at Albany State University (ASU) in Albany, Ga. According to school officials, the highly anticipated building will employ the latest in design elements, along with environmental efficiencies, life cycle cost considerations and teaching technologies.

“We are overwhelmed that our current and future students will now be able to receive exemplary instruction in a state-of-the-art facility. All of our stakeholders are excited about the fine arts center construction, and the impact it will have on the institution and the southwest Georgia region,” said Wendy Wilson, special assistant to the president for strategic communications and university relations.

In April, 2016, the university held a formal ceremony on campus to kick off the project. University administrators and local and state officials turned small piles of dirt with shovels to signify the start of construction on the 81,000 sq. ft. (7,525 sq m) building.

“The groundbreaking was extremely rewarding,” said Wilson, who also served as the groundbreaking committee chair. “We had supporters from across the local, regional and state communities who came out to witness and experience this historic event.

“This project is an indicator of ASU's investment in our students and the greater community.”

The building is fully funded by the state through the issuance of general obligation bonds. Officials said the state has an excellent bond rating and is able to borrow at low cost. The Fine Arts Center will be located on the upper campus, between the Billy C. Black Building and Residence Hall 5, and is expected to open in the fall of 2017.

Art Dunning, ASU president said, “Creative industries in Georgia provide $29 billion in annual revenue, so this center will help in regional economic development through university performances and community productions that will be held there.”

Art, music, speech, theater and music education will be moved from Holley Hall into the new facility. Designed to achieve maximum space and utility, the building will incorporate more than 50 professional staff offices, 12 classroom labs for English and general instruction and eight studio art classrooms.

Larry Wakefield, special assistant to the president for special projects, said students have many options regarding fine arts degree programs.

“Our goal as an institution is to continue to provide premier instruction. State-of-the-art resources enhances the level of instruction and increases our opportunity to attract top students from across the nation.”

Wakefield added that the new structure comes not a moment too soon.

“This facility has been long needed. We have exemplary academic programs in the discipline of fine arts, but have had to work out of old, crowded facilities. The new building will also help us attract new students.”

According to Robert A. Ward, senior project manager, Brasfield & Gorrie LLC, the project has not experienced any significant issues, to date. Tasks currently ongoing are electrical and plumbing, underground rough-in (providing the distribution of items such as power, low voltage, sanitary sewer and storm water for the building), building foundations that include cast-in-place concrete interior spread and continuous footings and preparation for slab-on-grade pours. Activities associated include back filling, placement of the sand base, application of termite treatment, installation of vapor barrier and concrete reinforcing, along with site utilities. Currently, the site storm water piping and structures are being installed.

Ward said working on an existing college campus is always a concern.

“This is a challenge, as the building is situated in between existing buildings such as student dorms, administrative buildings and classroom space,” Ward said. “There has been an impact to one of the main parking lots. Pedestrian traffic had to be re-routed. We also have to make sure construction traffic is routed in a way to minimize ASU's day-to-day operations.

Coordination related to systems such as theatrical lighting, audio-visual systems, etc. also must be addressed, said Ward, adding that the Fine Arts Center project has been planned and budgeted through design development for over a year.

“A significant amount of planning and coordination was able to occur during this period,” Ward explained. “More recently, the team performed an extensive effort to locate the existing utilities on the project site utilizing ground penetrating radar, as well as 'pot-holing' to visually verify the utility locations and depths. Brasfield & Gorrie also worked with the state and the university during development of the construction budget and selection of the subcontractor team.”

The project officially started in early May. Since that time, mobilization has occurred, including the installation of site fencing, trailers, etc. Approximately 90 percent of the site storm water system has been installed, along with clearing and grading to establish the building pad, installation of the building's deep foundations (approximately 300 aggregate piers) and work on the classroom building. This includes foundations, underground rough-in and slab-on-grade pour.

The project will include unique spaces, including a ceramics studio, kiln room, drawing and painting spaces, an art gallery, a wood shop, a metal shop and a foundry. Each of these spaces has their own unique requirements, such as fire ratings, lighting, electrical and data rough-in in the slab for equipment that must be coordinated early in the project. The band rehearsal room, “black box” and choral spaces are large rooms that have masonry walls that are more than 30-ft. (9.1 m) tall. These spaces will require high work for everything from the masonry to steel through the end of the project.

Ward said a variety of heavy equipment is being used on the job.

“Due to the time of year, pours are starting early in the morning to avoid the heat of the afternoons,” Ward said. “During slab pours, concrete pumps are utilized. The ready-mix concrete supplier has brand new impressive concrete trucks. The deep foundations, already completed, utilized an impressive rig, which was basically a large mast mandrel with a hopper for the aggregate attached to a tracked base. This rig created the shaft for the aggregate piers by displacing the soil with the mandrel and back filling with the aggregate with vibratory compaction.

“They also had to bring in a drill rig for the piers which were designated as uplift piers. A large crawler crane will be here shortly for the steel erection.”

Some of the main materials being used on the new structure include steel, concrete and CMU block. For the skin, campus brick will be used, along with metal panels, limestone cladding and modified bituminous roof.

Crews must also deal with the elements during the construction process, which can be trying at times.

“Weather is always a concern. However, we have been fortunate, so far. The main challenge has been the South Georgia summer heat, with a heat index regularly over 100.”

As for general prep work, not a great deal was required. Ward said the site was basically prepared previously.

“It was very flat, with no existing structures. There was a large pedestrian walkway that ran through the site.”

The design team for the ASU Fine Arts Center had a distinct mission when taking on the assignment.

“This project consolidates many vibrant academic programs that are currently housed in outdated and undersized facilities,” said John Abbott, director of design, Stevens & Wilkinson Architecture Engineering Interiors of Atlanta. “The main goal in the designing the fine arts center was to meet the program needs of the university and create efficient and functional spaces. At the same time, we recognized the importance of this building in the Albany community and its potential for increased public engagement through its language, art, theater and music programs.”

Described as modestly modern, the building has a contemporary look, but, according to Abbott, avoids unnecessary exterior architectural flair in favor of investment in much-needed academic, administrative and multi-purpose performance spaces. The modern design is in the creative use of space for multiple purposes and in the use of modern technology.

“The building features the campus standard brick, which will blend nicely with the adjacent academic and housing buildings. The volumes of the larger spaces in the building, such as choir, multi-purpose performance and band rehearsal, are articulated with the use of insulated metal panels. The main lobby has a limestone and glass entrance façade.

“The building is three stories. It doesn't adhere to a particular style, but, more important, blends in both in scale and choice of materials to become part of ASU's upper campus.”

As for sustainability, the design intent aligns with the Georgia Peach Green Building rating system. This addresses water conservation, energy efficiency, building commissioning and the use of Georgia-based materials.

“We hope this is a building in which the staff and students will look forward to spending a lot of time in pursuit of teaching and learning,” Abbott said. “We also hope it will attract the community at large to enjoy the great variety of visual and performing arts Albany State University offers.”

A historically black institution located in Southwest Georgia, Albany State University was originally known as the Albany Bible and Manual Training Institute. Founded in 1903 to educate young African-Americans, the university is committed to serving a diverse student population. The school offers bachelor's, master's, and education specialist degrees, in addition to a number of non-degree educational programs. According to Affordable Colleges Online's annual ranking of the Best Online Colleges of 2016, ASU rates second among Georgia colleges and eleventh among national colleges offering online degree programs.