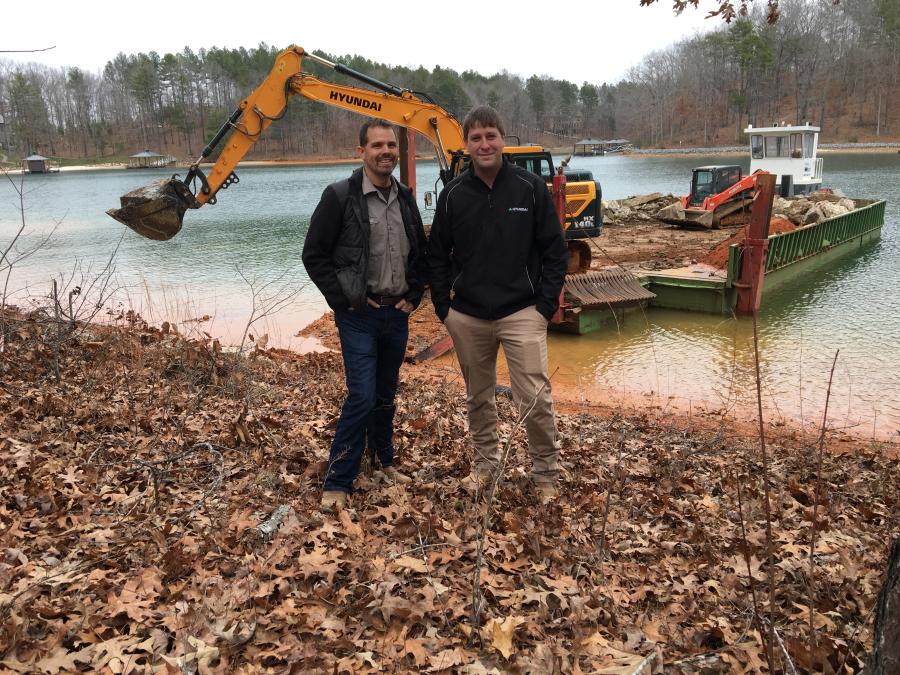 This man-made reservoir was created by Duke Energy for the energy needs of nearby residents and has roughly 360 linear mi. (579 km) of shoreline.

One firm, Lee's Ground Covers Plus, Walhalla, S.C., is committed to preserving the beauty and ecosystem of the lake, and has been hard at work on a shoreline restoration project. The project, which is being funded by Friends of Lake Keowee Society (FOLKS) through community support and government grants, is taking place over a total of 700 ft. (213 m) of which about half is an impact mitigation area. The company is working as a subcontractor for Kroeger Marine Construction, which serves the erosion control needs of Lake Keowee, Lake Thurmond, and Lake Hartwell.

“On this project, our first priority is to create a natural habitat for fish and other wildlife,” said Robbie Lee, owner of Lee's Ground Cover Plus. “We typically have to use large, natural boulders to create areas for the fish to get in and out and spawn. Anywhere we make an impact on the land, we also go back and do plantings and things of that nature to try to improve the habitat of the wildlife and the fish. That is our first priority. Our second priority is to protect the lake from erosion and decay and keep the lake from siltation as well. Our third priority is to protect the beauty of the homeowners' properties and enhance it.”

Lee said that a job can take anywhere from an initiation of two weeks to as much as two years, depending on permit processes. Each job requires a special permit granted by Duke Power. That permit dictates what type of boulders, what type of plantings and what areas the company can and cannot enhance.

For the Lake Keowee Island project, Lee is using boulders from the Maggie Valley, N.C. area. The company offers three different types of boulders. The first, and the most economical option, is a standard granite rock. The company harvests its most popular option, called Oconee Prime, out of the Oconee Rock Quarry. The third rock it offers is its Sylva Brown North Carolina Stone.

On a typical day, the company takes about one hour at its staging area, loading the materials needed for the job onto a barge. Then, crews travel on the lake, about two hours each way, and remain on the job for about four or five hours a day. Lee said the company can put out roughly 60 to 80 tons (54 to 72 t) of materials a day, depending on the job, and that, on average, they complete about 70 to 75 ft. (21 to 22 m) of shoreline per day. The average cost is about $100 per foot depending on the products the company uses for the job.

Lee's Ground Cover Plus has been using a Hyundai HX140L 34,000 lb. (15,422 kg) excavator, purchased from May Heavy Equipment, to place the rock along the shoreline, and the company has come up with a unique way to use the machine.

“It's a standard excavator, but we turn the buckets around and use them as shovels,” said Lee. “The reason we do that is because we are working backwards when we come in. We have to scoop up and prep the bank and then scoop the rock and put it out from the bottom up. Then, we can pack it into place. This is our first Hyundai machine, but definitely not our last. We were introduced to May Heavy Equipment through another contractor who introduced me to Crayton Wilson this past August.”

Lee said that the machine checked all of his boxes, including operator comfort and price point.

“The strength, power and efficiency of the machine as well as the warranty was what sold us. Over the past five or six months, we've had other transactions with May Heavy Equipment, and they have really gone above and beyond. We look forward to adding more of these type excavators and maybe other equipment from them in the future,” said Lee.

According to Lee, this lake is a representation of the positive impact that Duke Energy has had on the community overall.

“These lakes have brought in tons of revenue from taxes, but people also come in and enjoy these lakes,” said Lee. “These are clean, recreational lakes. It's an area that we see people moving to from all areas of the country, so home building is on the rise. It's a great place to live because of that. We are right here in the foothills so we have mountain views as well as lakes and rivers.”

Lee said that the idea for Lee's Ground Covers Plus began as an idea while he was working at Metromont Materials Corporation in Greenville, S.C. He was working 80-100 hours a week, but said it was a great job with great people and great benefits. Then, when his daughter was born in 1998, everything changed.

“I realized if I was going to put in those hours, when I wanted to spend more time with my family, I needed to do it for myself. So, I left and went into business for myself. I bought a little skid steer and an old dump truck and began to do odd jobs. Then, around 2004, we shifted toward our main business, which at that point was hauling,” said Lee. We started working with a company that operated the barges here on the lake, Kroeger Marine Construction, and we've been affiliated with some sort of barge work ever since.”

Lee said that his father retired a year-and-a-half ago and has been working with him ever since. He also hopes that his eleven-year-old son will get involved someday. “We have not only survived in this business, but have been steadily growing, thanks to God and the dedication and conscientiousness of a great crew.”

May Heavy Equipment was founded in 1997 by Bert and Jacob May, and has grown throughout the Southeast as a reliable source for heavy equipment rentals, sales and service. With more than 60 years of industry experience between them, the Mays are dedicated to providing quality heavy equipment, excellent service and competitive pricing.