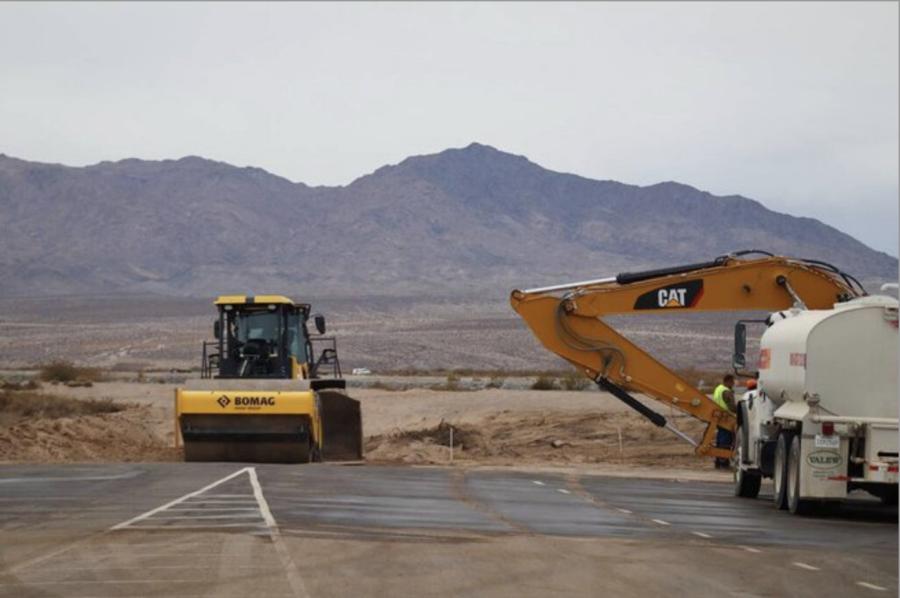 Fisher Sand and Gravel, of Tempe, Ariz., is the primary contractor for building the four-lane bridge that will span 724 ft. (221 m) and include a path for pedestrians and bicyclists.

Fisher Sand and Gravel, of Tempe, Ariz., is the primary contractor for building the four-lane bridge that will span 724 ft. (221 m) and include a path for pedestrians and bicyclists.

"Bottom line, the new bridge project is underway after many, many years of dialogue and debate," said Bullhead City Manager Toby Cotter. "It's going to happen. It's starting to happen now."

The project is a partnership between Bullhead City and Clark County, which includes Laughlin, an unincorporated casino and resort community.

The two communities across the river from each other share a local economy, with many Bullhead City residents working in Laughlin.

"The need for a second bridge connecting Laughlin and Bullhead City has been discussed and planned for decades, with federal funding first committed in the 1990s," said Clark County Commission Michael Naft, whose district includes Laughlin. "This bridge is an important transportation element and it is also critical for emergency responders."

The bridge will link the Bullhead Parkway in southern Bullhead City to Needles Highway in Laughlin, the Mohave Valley Daily News reported.

The existing Laughlin Bridge, paid for by Laughlin founder Don Laughlin in 1987 and deeded to the states of Nevada and Arizona, has served since 2001 as the only span crossing the river within the Bullhead City limits.

The new bridge will be about 8 mi. (13 km) south of the Laughlin Bridge and about 6 mi. (9.6 km) north of the Veteran's Memorial Bridge linking Fort Mohave to Laughlin near the Avi Resort Casino.

The next-closest bridge is at Needles.

Before the Laughlin Bridge was built, the bridge at Davis Dam was the only link between Bullhead City and Laughlin. That bridge was closed to public access following the 2001 terrorist attacks against New York and Washington, D.C.

Work recently started with clearing brush and other debris from the project area, constructing a pond near the Colorado River Nature Center on the Arizona side and staging equipment near the work site.

The bridge has long been in the planning process, with then-U.S.-Sens. John McCain of Arizona and Harry Reid of Nevada pledging support well before the turn of the century and Bullhead City and Nevada officials working with the Federal Highway Administration to identify an appropriate site.

The original favored site was discarded in 2008 because construction would have infringed on a public park, precluding federal funding.

It then took Bullhead City several years to come up with its current preferred site.

But Laughlin officials didn't like the site, and said it was too far south of Laughlin's business and casino districts and that the location would require construction of a new roadway to connect the bridge to Needles Highway.

At one point, the Laughlin Town Advisory Board asked if there were other projects of greater benefit to Laughlin that could benefit from county money earmarked for the bridge.