Flatiron Construction Ahead of Schedule for I-710 Project 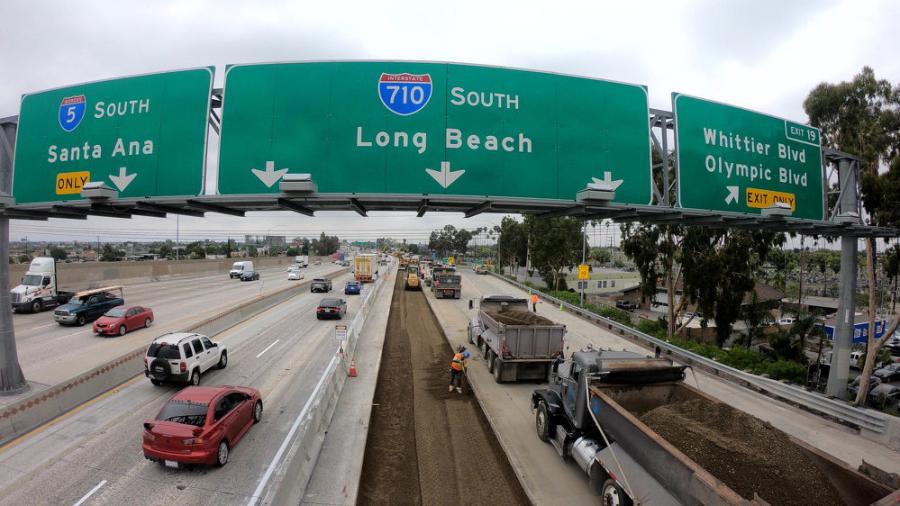 During weekend closures, Flatiron vehicles are able to enter and exit the work zone.

Construction began in May 2018 on the California Department of Transportation's (Caltrans) $150.7 million Interstate 710 Pavement Rehabilitation and Bridge Widening Project, which was awarded to Flatiron Construction Corporation in February 2018.

Crews have been making solid progress on the project that covers a 3.5-mi. stretch of the north-south I-710 through the cities of Commerce, Vernon, Bell, and the unincorporated area of East Los Angeles from Slauson Ave. to State Route 60. The project, financed by state and federal dollars, is scheduled to be completed in 2021.

The project consists of rehabilitating a portion of the highway (five lanes in each direction) with joint plain concrete pavement, (JPCP), and continuously reinforced concrete pavement (CRCP). All northbound lanes between Bandini Boulvard and the I-5/I-710 Interchange are being replaced with JPCP. The Hobart Yard Bridge, which spans BNSF16 rail tracks and several Metro lanes, is being widened.

The highway has five non-standard lanes (11 ft.) in each direction and is being widened to five standard lanes (12 ft.) with 8-ft. wide shoulders (inside and outside). In addition, the median shoulders are being repaved with JPCP and the median barrier will be upgraded to meet current standards. The work also includes installing new overhead sign structures, an overhead changeable message sign, and upgrades to drainage. 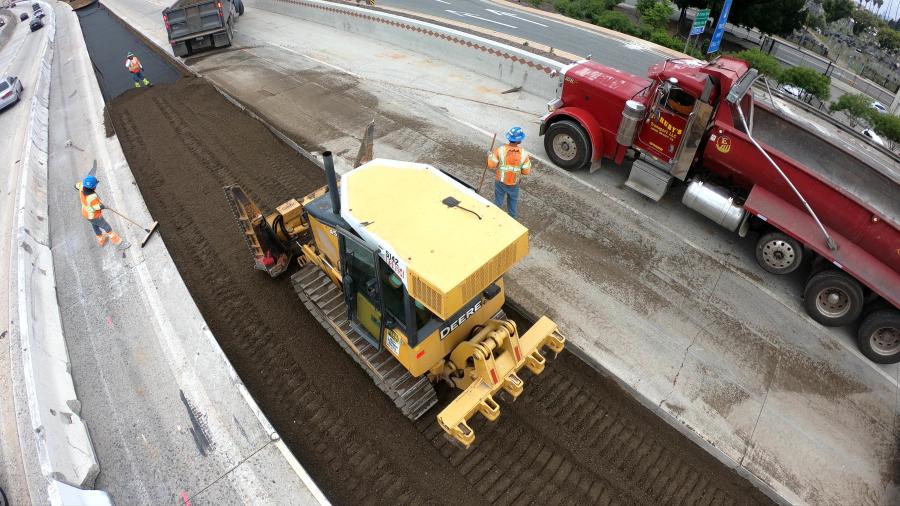 The Hobart Yard Bridge at 1,200 ft. is the longest, while the Bandini, Washington, and Pacific Way bridges are shorter. The on/off ramps for the bridges also are being widened.

Approximately 37 lane miles will be replaced, which includes all lanes of I-710 from Slauson to SR 60.

"The project will reduce congestion," said Eric Menjivar, public information officer of Caltrans District 7. "With the shoulders, motorists in an emergency will have a safe place to pull over and backups will not occur. It also provides a safe place for the California Highway Patrol and Caltrans maintenance workers to do their jobs. It will improve the movement of goods into and out of the Port of Los Angeles and the rail yards, creating a smooth transition for trailers where there is no interruption for them and motorists."

Planning for the initiative began in 1999. The infrastructure was built in the 1960s and upgrades are needed to extend the lifespan.

Prior to construction, the highway carried 214,000 cars and trucks daily. When completed, the new infrastructure will be able to handle 230,000 vehicles and meet traffic demands for the next two decades.

"The biggest challenge is widening the Hobart Yard Bridge over the rail yard," said Lee. "We're also rehabilitating the old concrete pavement, which is being done on weekends from Friday night to Monday morning, reducing traffic to two lanes. We're using a fast setting concrete, with a polyester concrete overlay, that sets in 12 hours. With conventional concrete, we could not put traffic on for at least 10 days. Normally the concrete pavement is 9-to-10 in. thick, but we're putting in over 13 in. — a thicker, beefier pavement because a lot of trucks use the highway."

The existing drainage system is being extended to the areas being widened with reinforced concrete pipe and drainage inlet, along with a Gross Solids Removal Device system (GSRD) to filter out the debris from the runoff before it goes into the channel adjacent to the Washington Bridge. A minimum amount of landscaping using drought tolerant foliage will be done when feasible.

Local traffic is impacted due to lane closures. 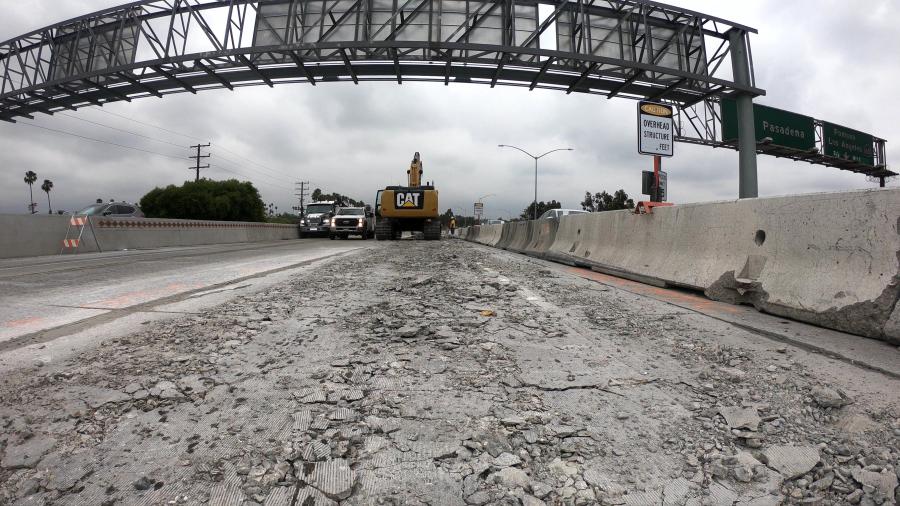 Flatiron has completed nearly 90 percent of the bridge work, with the remainder taking place on the Hobart Yard Bridge. But a fair amount of the road work sill remains.

"We're about 70 percent complete," said Lee. "For the 2020 construction season, our goal is to finish all the weekend pavement work by May and finish the Hobart Yard Bridge work just before summer so the full weight of that bridge can be utilized. For the second half of the year, Flatiron will rebuild the median pavement sections and place a new median barrier. There will be some landscaping and hardscape improvements in 2021."

On Jan. 13, crews began the demolition of an overhang with an existing barrier on the Hobart Yard Bridge.

"We have to remove the existing overhang barrier and build a bridge deck closure pour to tie the existing structure together," said Lee. "We're coordinating with BNSF to secure the work windows where we can go in. A temporary platform is being built to help catch all the concrete rubble that will fall down so that it doesn't damage the tracks."

Mike Roe, Flatiron's project manager, also is dealing with the restrictions of a tight work zone and constant traffic.

"We try to provide a 30-and-40 ft. work zone for the crews," said Lee. "For the weekend closures, K rails are placed and for weeknights, cones are placed. We close the ramps on weekends and this is where crews access the work area and bring in construction materials."

Relations between Caltrans and Flatiron are excellent. 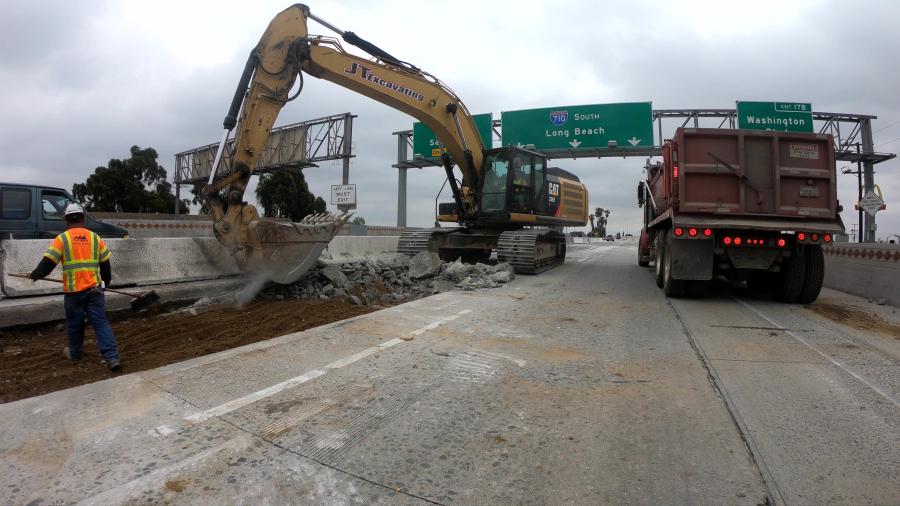 "We have a good team," said Lee. "Flatiron is a seasoned and experienced contractor in Southern California and we don't have any disputes as of today. We have developed great partnering relationship and trust in our team and the project is ahead of schedule. We also have weekly meetings with BNSF to coordinate the upcoming construction work."

Much of the lane reconstruction is done on weekends.

"We've learned a lot as the work has progressed because there is only so much that you can do on weekends," said Lee. "You cannot do more than you planned, because once you're committed, you have to finish what you started and the freeway closure has to be opened for the Monday morning commute."

Multiple crews remove the concrete and the soil beneath it, going down directly to the subgrade.

"It's a brand new roadway and that requires a lot of planning and coordinating," said Lee. "We stop paving on Sunday afternoon so that motorists can use the new lane on Monday morning. Because they excavate down 3 feet, the material they run into can be a bit tricky — claylike or soupy dirt and soil, which is a challenge for the crews." 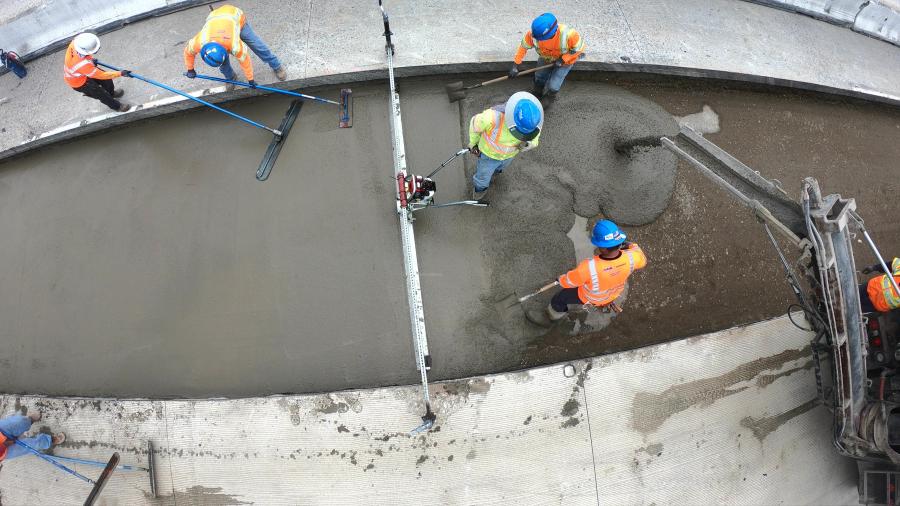 One of the challenges for the Hobart Yard Bridge work are the CIDH — cast in drilled hole concrete foundations.

"These pilings are 80 feet deep and we're working on them next to train traffic," said Lee.

The drainage system is being installed as the new roads are being constructed.

"Last winter it rained more than previous years in Southern California and Flatiron had to provide many temporary drainage systems — channeling and diverting stormwater around the work area — while the new pipes, inlets, and GSRD were placed," said Lee. 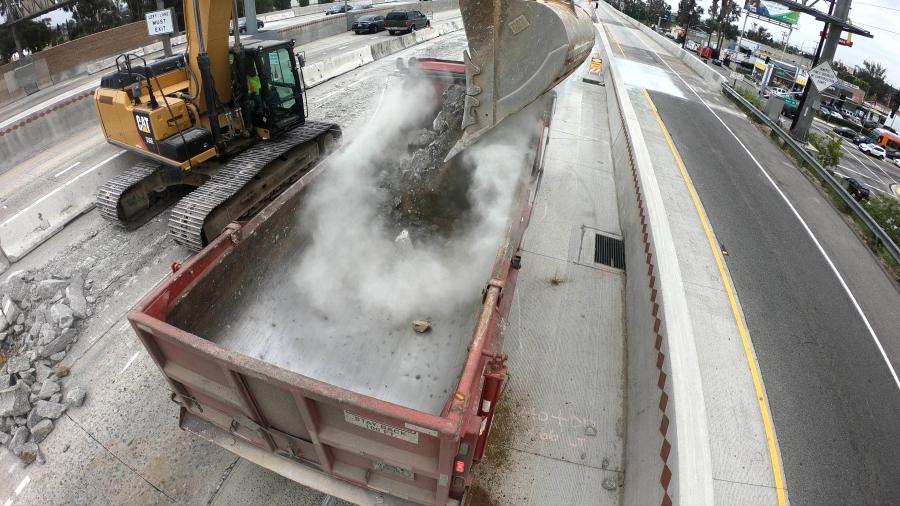 Flatiron set up a batch plant at the Bandini Blvd. off-ramp in Vernon to produce concrete for the repaving, which is using concrete removed from the existing structures, barriers and pavement.

"In keeping with our efforts to enhance the environmental sustainability, concrete is being recycled and used for this and other construction projects," said Menjivar. "Residents and local businesses nearest to the freeway may notice noise, vibrations and dust associated with the batching operation. We're making every effort to mitigate noise associated with construction activities by installing a noise reduction barrier around the plant location."

Noise levels do not exceed state, federal and city regulations; water trucks are being used to minimize dust during working hours; and dump truck drivers are minimizing backing up operations to reduce back-up alarm noise.

Mechanics are on site to do rapid repairs to maximize the work hours.

Flatiron purchased and rented equipment from many regional Los Angeles dealerships, which are helping with the project by providing spare parts and servicing machine under warranty. CEG