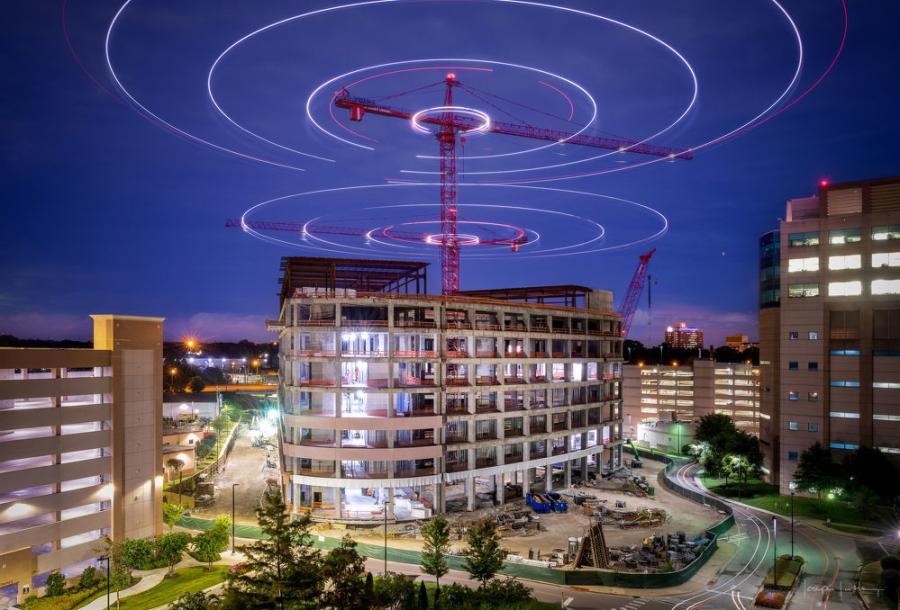 Six floors are dedicated to research, with the remaining two set aside for future expansion and evolving technologies. The new building will double the hospital’s research space in Memphis.

Designed by The Crump Firm, lead architect on the project, and Jacobs Engineering, experts in lab design, the goal is to create "an interactive hub of exploration and discovery that will cultivate transformative research and collaboration, as well as attracting scientists and clinicians to St. Jude," according to hospital communications staff. The facility, which has the capacity for 1,000 positions, will include modern labs focusing on immunology, neurobiology, cell and molecular biology, gene editing, metabolomics, advanced microscopy, epigenetics, genomics, immunotherapy and RNA biology. The space also will contain a biorepository and collaborative spaces to facilitate interaction among researchers.

Six floors are dedicated to research, with the remaining two set aside for future expansion and evolving technologies. The new building will double the hospital's research space, permitting St. Jude to free up space in the Donald P. Pinkel MD Research Tower and Danny Thomas Research Center. The overall expansion is being financed by donations from American and international supporters of St. Jude.

"The [ARC] will bring together a powerful combination of talent and technology in a space designed to propel discovery," said James R. Downing, president and CEO of St. Jude. "[It] propels St. Jude for the long term, accommodating growth for the next 20 years and beyond. We are creating an environment where scientists and clinicians will have ready access to leading-edge resources and opportunities to pursue breakthroughs in hopes of accelerating progress in treating and curing catastrophic pediatric diseases." 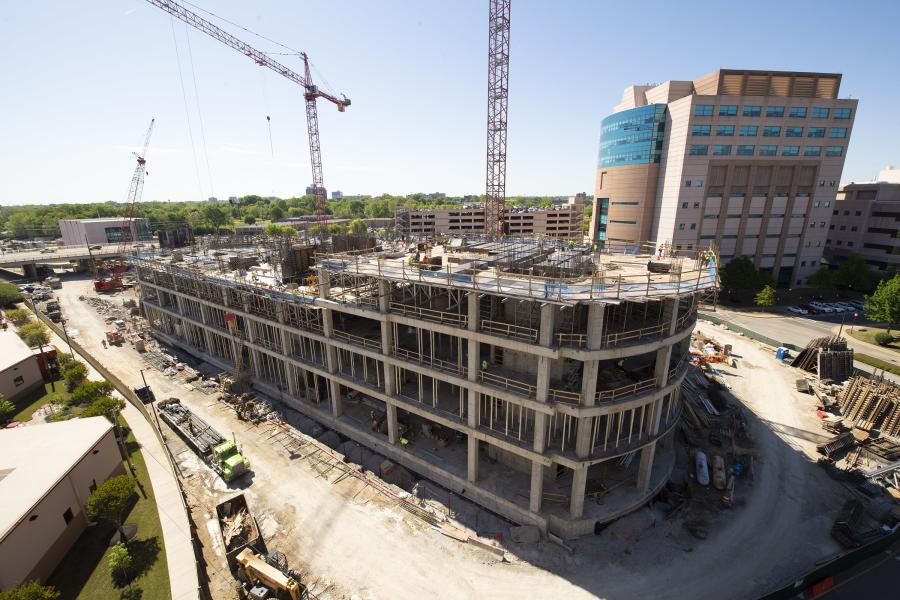 Planning for the ARC began in 2015, and construction started in April 2018. The coral-colored pre-cast building, with long stretches of green glazing to let in daylight, is shaped like a right angle. The left and right sides are smooth, while the curved front side is seven floors with a rooftop terrace. The shape is driven by the utilities surrounding it, which was crucial for digging the foundation. To the south is the main power feed coming the campus, while the north side has a sewer that could not be moved, the east side is adjacent to a highway, and the west side falls upon the quad area, a key architectural feature that unites several buildings.

A key design goal is to create an interactive and interdisciplinary environment that inspires researchers and promotes teamwork. This includes labs and spaces which enhance collaboration. Daylight will stream through open atriums and courtyards. The ARC features a large atrium, which also can be found in the Danny Thomas Center built in 1988.

"Every aspect of the advanced research center has been customized to inspire and support researchers who seek to lead and collaborate," said James Morgan, St. Jude's scientific director and executive vice president.

Met Crump and Walt Reed were the primary architects, with Reed leading the Crump design team.

The hospital's in-patient services building received LEED Gold Certification, and the ARC has followed that design closely, with energy and water conservation measures, the same high-tech lighting systems and an advanced HVAC system. However, St. Jude is not seeking LEED certification on the new building. According to John Curran, the hospital's director of design and construction, it will be the most efficient building St. Jude has built energy-wise.

Memphis is located in a serious seismic zone, and to meet design and safety standards a greater amount of rebar was required to withstand the impact of significant earthquakes. The city hasn't had a major earthquake since 1812, but according to geological records there is one every 500 years.

The ARC completes the St. Jude academic quad, and St. Jude and Flintco held a "topping out" ceremony for the building in early October.

For Flintco. the first step was to demolish the single-story materials management and design and construction office. The demolition, which took two weeks, started in mid-April 2018.

"There were some existing footings underneath and some large sections of concrete from an old railroad turntable that used to be down there," said Henry Knerr, Flintco's project manager. "It was removed in pieces and parts. The debris removal was phased, and it took about one month total."

The debris was sent to various recycling centers. The site preparation started three weeks into the demolition, with the foundation being dug for the basement level, and beams immediately installed for shoring.

"Some of the geopiers were 60 to 70 ft. deep and they had five- or six-foot pile caps on them," Knerr said. "We then laid down a two-foot thick structural concrete slab. You have to sequence the work so that you keep your access coming out."

The site is a mile from the Mississippi River, and to deal with the associated water and soil issues, a deep well system around the entire area was installed, along with a shoring wall.

"When we remove formwork and engage in pan slab operations, you put baffles on the concrete down below so that there are no loud bangs," Knerr explained. "You take remedial methods, which sometimes includes tires to baffle the noise."

Being a LEAN project, Knerr said Flintco did its best to coordinate and schedule materials coming in "as needed" throughout the process. Because of the tight job site with limited room surrounding the building, having one way in and one way out was a challenge.

"Sequencing of materials and securing parking for workers are issues that you plan on, anticipate and deal with," Knerr stated. "You try to pour concrete at night when traffic flow is less and in general on hospital projects you try to do things in off times, making sure you can load the building at night so you could do your work during the day."

The few utility conflicts that did arise were quickly resolved via discussions with Curran and his team along with Memphis Light Gas & Water, the city's utility company.

"With any existing areas, there are utilities," Knerr said. "We had to relocate storm sewer and water. With our shoring system, with the tiebacks, we had to make sure that we missed an existing 48-in. sanitary sewer that was probably 40 ft. from the east side of the building and other box culverts. We had to hang some existing electrical off of our shoring system, which were designed to handle the concrete duct banks."

With the topping out completed, the process of enclosing the building is currently underway before the typically mild, but unpredictable Memphis winter arrives. Knerr said Flintco uses as much prefabrication as possible. That process is currently being used to install the glass systems. Prefabrication is enabling Flincto to seal the building in quickly.

"Everything has to be precise and that's why all our subcontractors use the robotic system," Knerr added. "We had surveying companies, along with our engineers, always double-checking controls and putting controls in so that they could do their job."

The ARC's design calls for a variety of high-tech systems to ensure sterile research rooms and control airflow. As the floors go up, planning for the installation of HVAC, plumbing and electrical systems is ongoing. A TPO roofing system will be installed after several interior benchmarks are completed, such as the elevators and gear rooms.

The bridges in the courtyard have been poured and the large trusses were installed between Aug. 22-24 with the help of a 500-ton crane.

"We never leave anything to chance — we try to pre-plan, organize and make sure things happen in a way that we had anticipated," said Knerr. "We have a quality control plan and a quality control team, but everyone is part of quality control. We do rolling punch lists of the trades and they are followed up with project management software that we use."

Twelve elevators are being installed, with the service elevators going in first so that the buck hoists can be removed. The scope of the interior work is massive, with stud walls and main corridors being put in.

Installation of sheet rock can't be done until the building's temperature can be regulated. Several electrical systems are currently being installed, which will allow other interior operations to start in November.

"Our team works as one," said Knerr, who noted that management teams have been formed for various parts of the building.

"Our owner, Alberici Corporation, likes us to use the local market, so we try to break up the packages into small enough units," Knerr said.

Flintco crews have used excavators and dozers from established manufacturers, as well as several types of cranes. Alberici provides the equipment to Flintco, be it owned or rented.

"For rentals, they reach out to the local markets for the best deals," Knerr said. "It just depends on what we have in-house and how that compares to what the local prices are. We have a lot of lulls for the high use and heavy pieces of equipment. We rotate them in and out and have them go to the shop for maintenance and repair. About the only thing we had coming into the site was for the tower cranes."

Knerr noted that his crews could probably deliver the tower ahead of schedule as all of the milestones have been completed on time.

"Communication, follow-up, organization and making sure that people are lined up when they need to come in are crucial on a multi-year project like this one," Knerr explained. "It's a unique and complicated project that requires a lot of planning and detailed work to make it a top-of-the-line research facility." CEG