Florida Drivers Get Some Relief, But I-4 Overhaul Not Done Yet 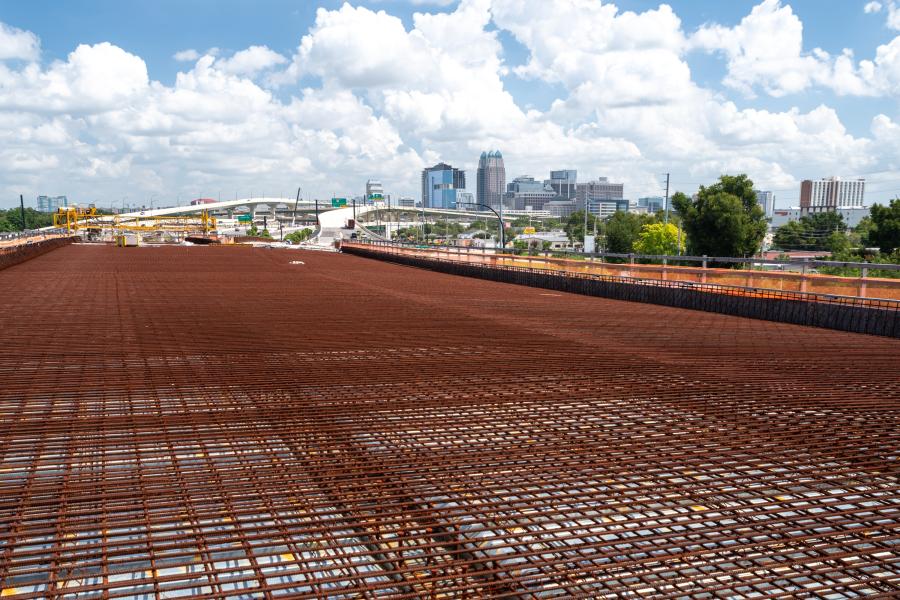 As part of the project, a grid of rebar was ready to be overlaid with concrete on this section of I-4, looking toward downtown Orland. (FDOT photo)

There's good news for Florida's Interstate 4 commuters who have dealt with years of white-knuckle driving: The construction on the 21-mi. of non-tolled lanes is finished, sort of, as promised by the state's road agency early this year.

"The department's goal was to provide a solution that would offer the biggest benefit to the greatest number of drivers," Florida Department of Transportation (FDOT) Secretary Kevin J. Thibault said in March. "Focusing on getting the general use lanes open within the original project timeline does just that."

But there is fine print that goes with Thibault's promise.

The toll lanes along the center median won't be finished and opened until late next year, and a final coat of asphalt paving needs to be applied to non-tolled lanes.

What's more, for drivers who have pinned their hopes on the $2.4 billion I-4 Ultimate project solving their rush-hour slowdowns, the transportation agency is warning that remains to be seen but may not be the case.

"You can't really out-build congestion," said Jessica Ottaviano, the FDOT's Central Florida spokesperson. "What you are really doing is trying to build a solid transportation network."

The I-4 Ultimate project started in 2015, rebuilding 21 mi. of the interstate in Seminole and Orange counties and through Orlando, and adding toll lanes in each direction. Work was to have been mostly finished by now.

But delays mounted, including Hurricane Irma's impact in 2017, catastrophic failure of bridge foundation work in Orlando, extensive cracking in a concrete pier supporting bridging at Colonial Drive and a spate of construction accidents.

The construction consortium, I-4 Mobility Partners, and the company it created, SGL Constructors, lodged 60 claims for extra time and an additional $340 million in payments.

Other claims for delays and additional costs ranged from one filed in 2018 arising from the suspension of construction to accommodate an Orlando visit by Vice President Mike Pence, to one also filed in 2018 citing a lack of electric crews to relocate Duke Energy and Orlando Utilities Commission wires.

Because of the extra expenditures, the FDOT agreed in April to pay an extra $125 million for a job priced originally at $2.3 billion and to allow an extension of deadlines.

While the non-tolled lanes and interchange ramps are in their permanent configuration, and are being used as Thibault predicted, the April agreement specifies that non-tolled lanes don't have to be complete until next year.

The final coat of asphalt paving yet to be applied to the non-tolled lanes is called a friction coarse and is designed to shed or drain off rainwater quickly for safer, high-speed driving.

Also coming in 2021 is completion of landscaping along a roadway that, with a set of towering complex ramps at the I-4 and Florida State Road 408 interchange, is a landmark feature of the Orlando metro area.

Ottaviano said lane closures and temporary concrete barriers will continue into the coming year with construction of the tolled lanes.

"We do know that there are some areas of the project that have already seen better travel times," Ottaviano said.