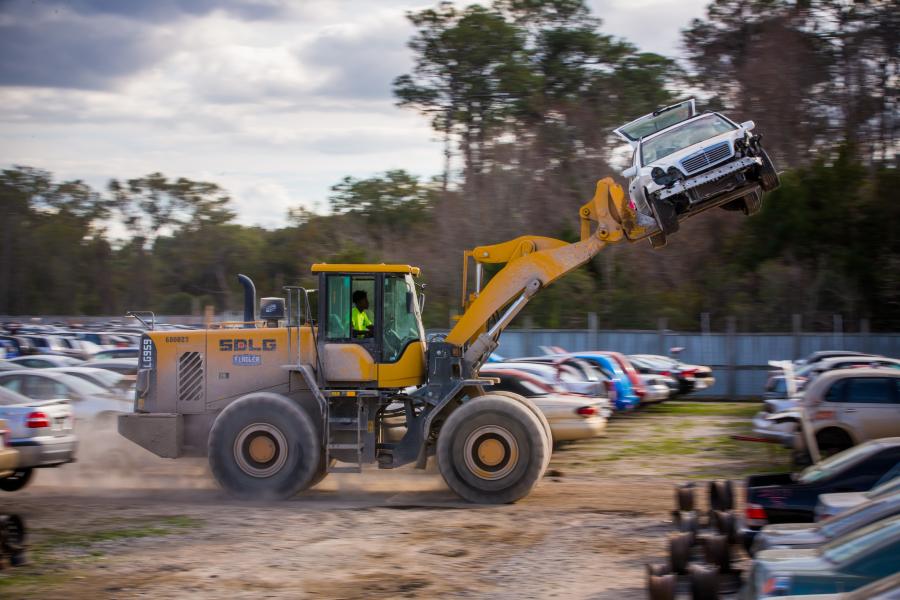 With more than 30 years in the auto salvage business, Ace Pick-A-Part has earned its expertise in handling vehicles.

With more than 30 years in the auto salvage business, Ace Pick-A-Part has earned its expertise in handling vehicles. The company holds some 3,000 cars on its lot at any one time, with easy access for customers to pull parts for repairs. It also recycles approximately 10,000 cars a year, using a fleet of wheel loaders to haul hundreds of vehicles each day.

The Jacksonville, Fla., based company has been using wheel loaders with custom-made fork attachments since the mid 90s, perfecting the application over the years by using a variety of different brands and capacity sizes. Since 2016, Ace Pick-A-Part has selected SDLG as its wheel loader of choice. It's using two SDLG LG959s with plans to add more loaders to its fleet this year.

“We started our business using forklifts, but wheel loaders are much more maneuverable, and they have increased wheel distances and higher capacities that are better suited to our needs,” said Gary Lindros Jr., general manager of the company. “We had custom fork attachments made that enable us to lift up to four crushed cars at once. The longer forks reach through the cars and there is a stop on them so the cars won't slide back.”

When Ace Pick-A-Part needed to replace two of the seven wheel loaders in its fleet, SDLG was suggested by Flagler Construction Equipment, which is based in Tampa but also has a location in Jacksonville. SDLG's value proposition — in which the brand offers basic, reliable technology that is field proven and backed by a substantial warranty — won Lindros over. Ace Pick-A-Part chose two LG959s for their size and lifting capacity.

Since taking delivery of the machines in June of 2016, the company has been running the two SDLG loaders six days a week, all day long. Operators took to the wheel loaders quickly, Lindros said, as operation is “easy and pretty standard for the industry.”

The LG959s are mainly used to lift cars from flatbeds to stands on the company's lot. Once the cars have been picked for parts, they're taken to a crusher where up to four vehicles are compressed together. The loaders then lift the stacks of cars that weigh up to 2 tons (1.8 t) and place them on flatbeds to be taken for steel recycling. The company also swaps out the fork attachment occasionally for a 4 cu. yd. (3 cu m) bucket to perform groundwork repairs at its facility and various other tasks.

“One advantage of the SDLGs is the easy maintenance,” Lindros said. “We like to handle our own maintenance and the side panels make the engine very accessible. With other loaders we've owned in the past, you sometimes had to pull the whole engine cover off for a routine task. The SDLG machines make it easy for us to keep them maintained and running without going to a dealer for basic maintenance.”

The LG959 has an operating weight of 38,250 lbs. (17,349 kg). It features a Tier III Deutz engine with 221 hp and 777 lb.ft of torque; ZF transmission and axles; wet disc brakes; a hydraulic quick coupler and 3rd function hydraulics; a modern fit and finish with high visibility; and an operator-friendly cab. It comes with a 12-month, 2,000-hour warranty.

Ace Pick-A-Part has been so impressed with its SDLG loaders that the company plans to purchase more as it replaces its aging fleet in years to come. This year it plans to pick up one to two more SDLG models. Again, the company will look to Flagler Construction Equipment, with which it has had a relationship for several years.

“We always have a great experience with Flagler,” Lindros said. “We feel at ease buying from them and there are never any surprises. The SDLG units have been performing perfectly well, so we're very pleased with both Flagler and SDLG.”

Flagler is part of the Flagler CE Holdings Group, which also includes Penn-Jersey Machinery in Pennsylvania, New Jersey and New York. The company has been serving Floridians since 1987 and operates branches in Jacksonville, Lake City, Orlando, Tampa, Ft. Meyers and Ft. Lauderdale.

Gary Lindros Sr. founded Ace Pick-A-Part in 1986, and the family-owned and -operated business has since grown to 25 employees. It's the largest self-service auto salvage yard in Jacksonville.