For a Small State, Vermont's List of 2021 Transportation Projects is Long 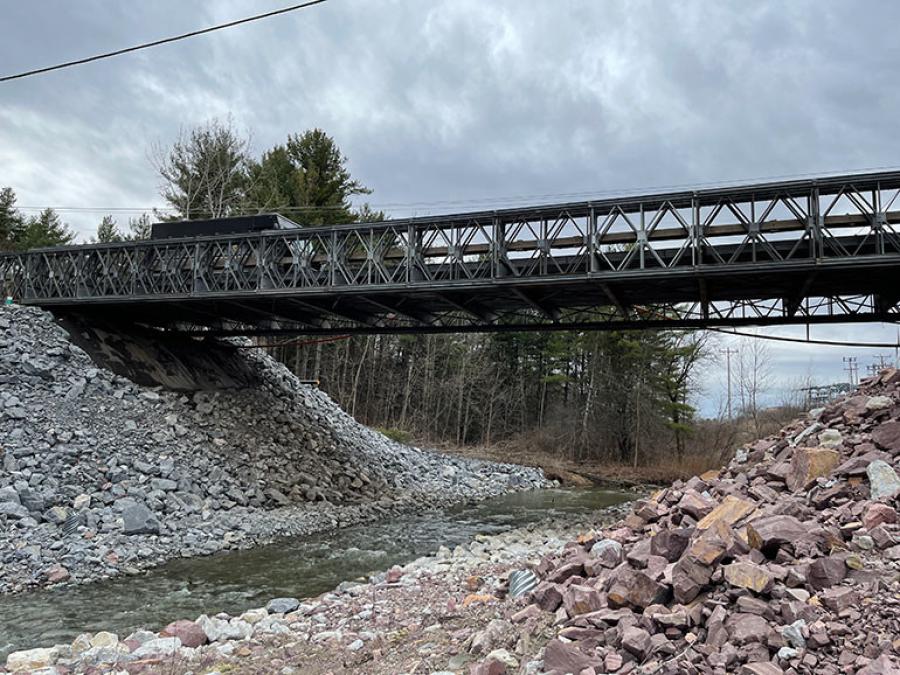 Rip-rap supports the bridge abutments on Kimball Avenue above the Muddy Brook at the South Burlington-Williston line. (VBM photo)

For being one of the nation's smaller states, the Vermont Agency of Transportation's (VTrans) list of highway projects for 2021 is prodigious, indicative of the agency's responsibilities that extends far beyond replacing old pavement and fixing bridges on its state, federal and interstate roadways.

Vermont is the nation's sixth smallest in terms of area at 9,616 sq. mi., but VTrans plans to begin or continue working on 95 different projects of widely varying sizes over the rest of 2021.

One example of VTrans' work this year will be the reinforcement of the stone underpinnings of the covered bridge that connects Windsor with Cornish, N.H.

At 449 ft., the Windsor-Cornish structure was the nation's longest covered bridge until 2008, when a longer one was completed in Ohio. Built in 1866 for only $9,000, or about $160,000 in today's money, the Connecticut River bridge now enjoys a place on the National Register of Historic Places.

For instance, the next Connecticut River crossing to the north, the I-89 traverse at White River Junction, will be rehabbed and widened over the next four years for about $17 million.

With the pandemic slowly receding and the construction market ramping up, 2021 promises to be a busy year in the Green Mountain State.

The city of South Burlington will be more active this summer as VTrans crews will be replacing the temporary bridge that has spanned Muddy Brook, on Kimball Avenue at the Williston line, since 2017. That year, a spring storm damaged the culvert that the earthen structure traversed, creating a big hole in the roadway.

The temporary bridge subsequently installed served its purpose until late 2019, when high water washed away the culvert and the soil surrounding it. By placing riprap along the brook's banks, the city reopened the bridge on the last day of December.

To create a less bumpy ride for the 7,000 plus vehicles the bridge sees on an average day, South Burlington Public Works closed the bridge for three days last September to pave it with a thin layer of asphalt. That effort failed, however, as potholes soon began to plague motorists. Another repaving led to the same result.

The tribulations, however, should end this summer as the temporary structure will be removed and a culvert installed that will be "buried and out of sight," the city's Public Works director, Justin Rabidoux, told Vermont Business Magazine.

The new crossing also will include sidewalks for travelers on foot. Construction is expected to begin in June, with the goal of completing the work 12 weeks later — almost 4½ years since the original failure.

Bikes and Pedestrians to Benefit

VTrans also will have contractors extend Montpelier's Cross Vermont Trail east to U-32 Middle-High School, and then across the Winooski River on a new, dedicated bridge. From there the construction will continue a short distance along the north side of U.S. Highway 2 to a point just beyond the East Montpelier line.

The bike and pedestrian trail is a 90-mi. route that follows the Winooski and Wells Rivers from Lake Champlain east to the Connecticut River. With the new Montpelier-East Montpelier segment in place, 30 mi. of off-road trail will be open, with the remaining 60 still in public roadways.

Greg Western, executive director of the Cross Vermont Trail Association, told Vermont Business Magazine that the goal is to get the entire trail away from the road wherever possible. He added that his organization plans to open the 1.8-mi. Montpelier-East Montpelier segment by the end of the year.

Several paths for walkers, runner and bikes also will progress in Bennington, the site of several projects this year and in 2022. The new routes, including an active corridor that combines an off-street path with on-street bicycle lanes, total 4 mi., all on the north side of the South Shire's main community, Vermont Business Magazine reported.

"There's a [Bennington County Regional Commission] comprehensive plan to connect all the pathways in an appropriate way, so we're basically building out a network in our entire community," Bennington Assistant Town Manager Dan Monks told the news source. The projects on the current work list "will form the backbone of the network," he added.

The projects will help create a non-motorized 4-mi. route between Bennington College and downtown so people without cars can patronize the north side's stores and restaurants more easily.

Major Projects on the Horizon

In Middlebury, a major transportation enterprise may result in improved community amenities. A multiyear, $70-million- to $80-million-project that has replaced two old bridges with a 350-ft.-long tunnel in the heart of the town will finish later this spring. Part of the effort was the lowering of the Vermont Railway track bed that ran beneath the pair of nearly adjacent bridges.

Vermont Business Magazine noted that just north of the tunnel, the AOT will this summer launch construction of a boarding platform to be ready when Amtrak service is extended from Rutland north to Burlington late this year or early in 2022.

The Waterbury Main Street project, like the amenity upgrades in Middlebury, is demonstrating how the updating of transportation infrastructure dovetails with any number of initiatives to help a community both serve residents and attract visitors.

According to the VTrans webpage, the Main Street project will rebuild a 1-mi. section of U.S. 2 to integrate pedestrian and streetscape improvements and facilitating access. First started in 2019, with an expected completion date of 2022, the project is entering its final phases, according to the town's community transportation liaison, Barbara Farr.

In terms of road construction, the street, which U.S. 2 and VT 100 follows through Waterbury's downtown, needs only a final layer of asphalt before completion this summer. But Farr expected that the removal of utility poles and transmission lines will not be done until summer 2022.

Due to the pandemic, she noted that, in 2020, "because businesses were closed, people were working from home, schools were closed, or in the fall they opened part-time. [As a result,] contractors were able to get a lot of work done while people were not on the road."

The remaking of the town's main thoroughfare, as well as work on a pair of adjoining side streets, will cost $22 million, Farr estimated.

"Not only is the downtown going to be a lot more beautiful and a lot safer, with the bump-outs and so forth [but] the big stuff is the stuff people aren't even going to see — the underground water lines, storm drains, electrical lines," she commented to Vermont Business Magazine. "The infrastructure improvements are setting Waterbury up for the next 50-plus years."

In other words, VTrans' job is not simply to get folks down the highway more easily, but also to maintain and improve the things that make Vermont an attractive place to live or visit, whether they are former rail trails that beckon cyclists, or streetscapes that, after long months of social isolation, invites neighbors who have not seen each other and visitors too long absent, to sit down for a leisurely coffee at a sidewalk cafe.