For I-10 Widening Project, ADOT Is Recycling Old Roadway 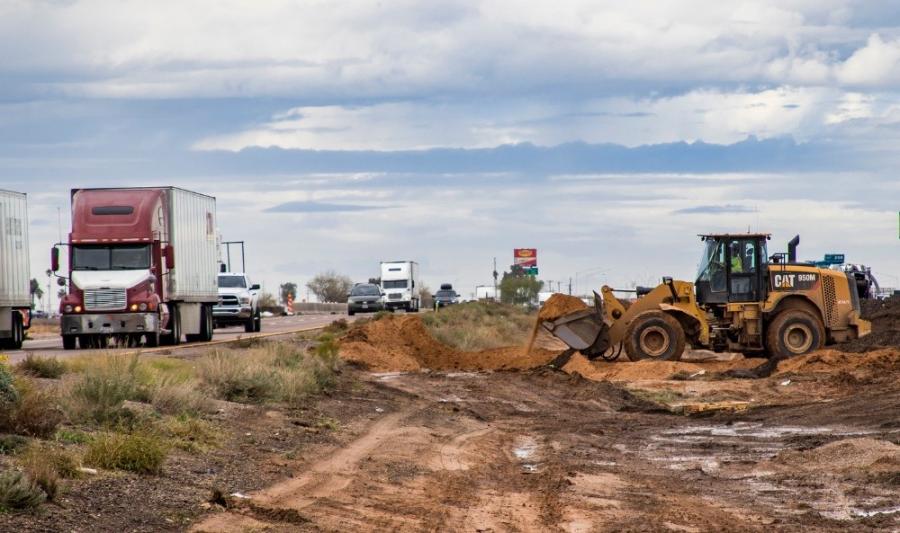 ADOT engineers are using old asphalt to create the foundation for the new I-10 eastbound lanes that are now under construction. (Arizona Department of Transportation photo)

Almost as soon as traffic on eastbound Interstate 10 started using new lanes through 4 mi. of Pinal County between Eloy and Picacho, Arizona Department of Transportation crews began demolishing travel lanes that had been in use for more than 40 years. The same occurred in December when westbound traffic moved to new lanes.

But instead of finding a place to discard the old asphalt, concrete and dirt, ADOT engineers are using it to create the foundation for the new eastbound lanes that are now under construction.

"We need to build up the ground under the new eastbound lanes of I-10," said Dave Locher, ADOT's regional engineer and project manager. "Usually we have to haul material in from some offsite location, which can be expensive. But in this case the better answer was literally right in front of us."

About 1 million sq. ft. of asphalt, tons of earth from below the roadway surface and 30,000 ft. of guardrail will be removed from the old lanes of I-10. Guardrail in good condition will be sent to maintenance yards around Arizona for use in other projects. The rest of the material will be moved 100 to 150 yds. east to the new eastbound alignment.

In many large projects, crews create a "borrow pit" when they need additional dirt. The pit usually is located near the project, in a site where removing earth doesn't create additional environmental or economic concerns. Hauling that extra dirt adds time and money to the project.

ADOT is expanding I-10 to six lanes between mileposts 209 and 213, as well as building a new interchange with State Route 87 and creating a first-of-its-kind dust detection zone in the area north of Picacho Peak. The new alignment is just east of the current freeway.

Along with a second widening project in Casa Grande, the work will make I-10 a six-lane freeway from Casa Grande to Tucson. Both projects are expected to be complete by fall 2019.