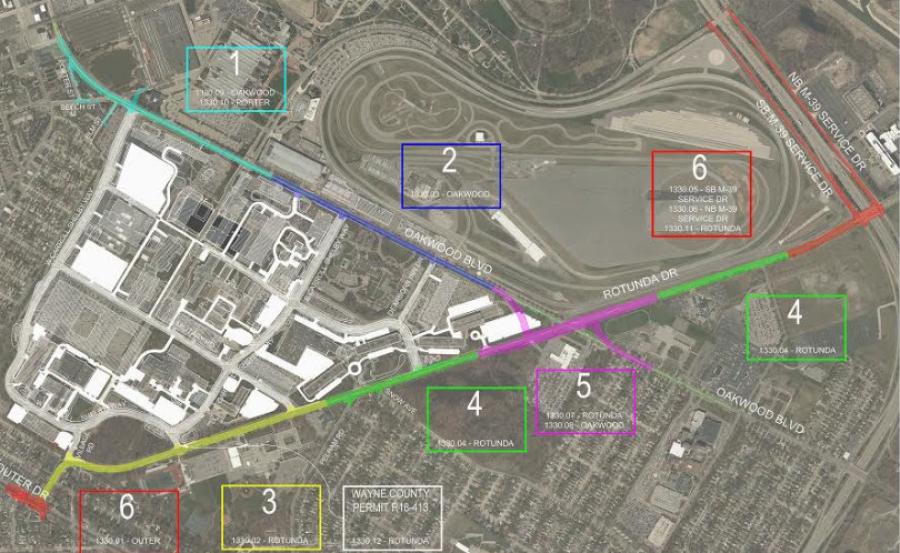 A map of the 6 planned project areas (MDOT photo)

The Michigan Department of Transportation (MDOT) is awarding a state transportation economic development grant that will support more than 11,000 existing jobs in Wayne County. The grant will go toward infrastructure improvements related to Ford Motor Co.'s plans to transform its Research and Engineering Center in Dearborn into an open, high-tech campus that could one day house more than 20,000 designers, engineers and product development workers.

Announced in September, Ford's Dearborn master plan envisions a walkable campus of interconnected buildings that would be accessible to the public and sit along Oakwood Boulevard, close to downtown west Dearborn and The Henry Ford Museum. An improved public road network is critical to ensuring vehicle and pedestrian safety and to further manage the traffic increases expected as a result of Ford's new Research and Engineering Center project.

"I was proud to work with Ford Motor Co. and our local partners to support the transportation components of their re-envisioned Research and Engineering Center," Gov. Gretchen Whitmer said. "When we make real investments in our infrastructure, we can attract more businesses and talent to our state and grow our economy. This has been a crucial step toward achieving that goal, but there is still work to do. We must invest more into our roads so everyone can drive to work safely and so companies have unimpeded access to markets."

In addition to the grant-related project work, Ford worked in 2018 with Wayne County on road improvements on Rotunda Drive near Carroll Shelby Way East.

"We greatly appreciate MDOT, Wayne County, and the city of Dearborn for supporting this important project that will improve local roads and provide new amenities and public spaces that will benefit the community," said Gabby Bruno, Ford Motor Co. regional government relations director. "Our campus of the future will bring Ford employees and local residents together like never before, with coffee shops, restaurants and shared pathways that people can use seven days a week and across all seasons."

The total project cost is $30.69 million, including $18.38 million in TEDF Category A funding and $12.3 million from Ford Motor Co. and the Wayne County Department of Public Services.

Enacted in 1987 and reauthorized in 1993, the TEDF helps finance highway, road and street projects that are critical to the movement of people and products and getting workers to their jobs, materials to growers and manufacturers and finished goods to consumers.