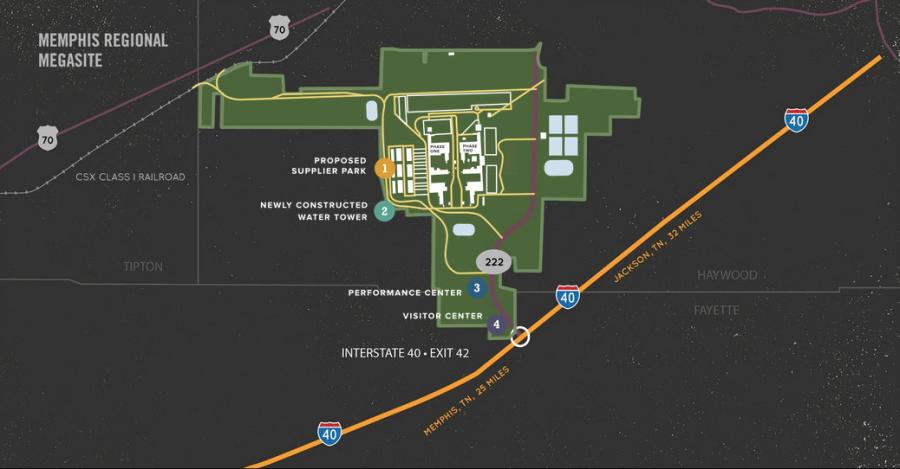 Tennessee Gov. Bill Lee announced Sept. 27 that Ford Motor Co. has selected the Memphis Regional Megasite for one of the largest battery and vehicle manufacturing campuses in the United States, a $5.6 billion investment creating 5,700 jobs.

"West Tennessee is primed to deliver the workforce and quality of life needed to create the next great American success story with Ford Motor Company and SK Innovation," Lee said in a statement. "This is a watershed moment for Tennesseans as we lead the future of the automotive industry and advanced manufacturing."

The multi-billion commitment by Ford and SK Innovation, a South Korean battery maker, will fund the construction of a 3,600-acre mega campus called Blue Oval City about 50 mi. northeast of Memphis, where production of next generation all-electric F-Series trucks will begin in 2025.

The site is located just north of Interstate 40 in Haywood County, near its border with Fayette County.

The new plant represents the largest investment in the electric vehicle (EV) industry in Tennessee, which leads all other southeastern states in EV manufacturing.

Construction is set to start by the end of the year, the Memphis Commercial Appeal reported Sept. 28.

When completed, Blue Oval City will be the largest vehicle and battery manufacturing campus in the United States and the first that's carbon neutral, said Bill Ford, executive chair of the Ford Motor Co.

"We're looking at every aspect of production, every drop of water, every ounce of raw material, every watt of electricity," he explained. "Our vision is to create a closed plain loop of auto manufacturing. This will set a new standard for American manufacturing."

Lee said the project also will include a new Tennessee College of Applied Technology (TCAT) to be developed on the Memphis Regional Megasite in conjunction with Ford Motor Company and SK Innovation's Blue Oval City.

A news release from Lee's office noted that the new TCAT will provide customized training that will focus on EV and electric battery manufacturing and repair with the curriculum concentrating on mechatronics engineering and automechanics.

"We are continuing to prepare a pipeline of skilled workers who are equipped for the future of advanced auto manufacturing, students who are prepared for life beyond the classroom and workers who can make a great living," Lee said.

Besides the expected 5,700 jobs the project should bring to the West Tennessee project, another 33,000 construction positions will be needed initially, according to Bob Rolfe, commissioner of the Tennessee Department of Economic and Community Development (ECD).

Once the facilities are finished, they should bring 27,000 direct and indirect jobs to support the site's operations, the Tennessee Lookout reported. This will result in more than $1.02 billion in annual earnings.

Rolfe said that the state also expects the Blue Oval City project to generate temporary construction benefits that will include $5.6 billion spent on land, buildings and other real property improvements. Additionally, the salaries related to its construction activities may total around $1.87 billion.

In all, the Memphis Regional Megasite project is anticipated to contribute $3.5 billion each year to the state's gross state product.

"The ripple effect resulting from these projects will be transformational for our state, especially West Tennessee, and we are most grateful for this enormous investment and the addition of two top global brands," Rolfe said in a statement. "To have such a world-renowned American company land as our first tenant at the Memphis Regional Megasite underscores the site's strength and potential for additional joint venture partners and suppliers."

A Completely New Type of Facility for Ford

The Tennessee Lookout noted that Blue Oval City will be designed to be the largest, most advanced, and most efficient automotive production campus in Ford's history. The campus will include the Ford assembly plant, a supplier park and a battery manufacturing plant operated by BlueOvalSK, a joint venture of Ford and SK Innovation. The site will become a vertically integrated ecosystem with key suppliers and battery manufacturing on the same campus where Ford will assemble next generation all-electric F-Series trucks.

In addition to the multi-billion-dollar investment from Ford, the state of Tennessee intends to offer an enhanced incentive totaling more than $500 million for successful completion of the project, the news source reported.

"Tennessee is playing a key role in leading American advanced manufacturing, and we are thrilled to make this historic investment in West Tennessee to create Blue Oval City," said Lisa Drake, Ford North America's chief operating officer. "This once in a generation investment will create thousands of high-quality jobs and support America's transition to electric vehicles. Tennessee will play a critical role as Ford continues to lead the electric vehicle revolution, tackle climate change, and create the jobs of tomorrow. We look forward to working to create the future together."

Lee intends to call a special legislative session in Nashville this fall to address funding, buildout and oversight for the Memphis Regional Megasite.