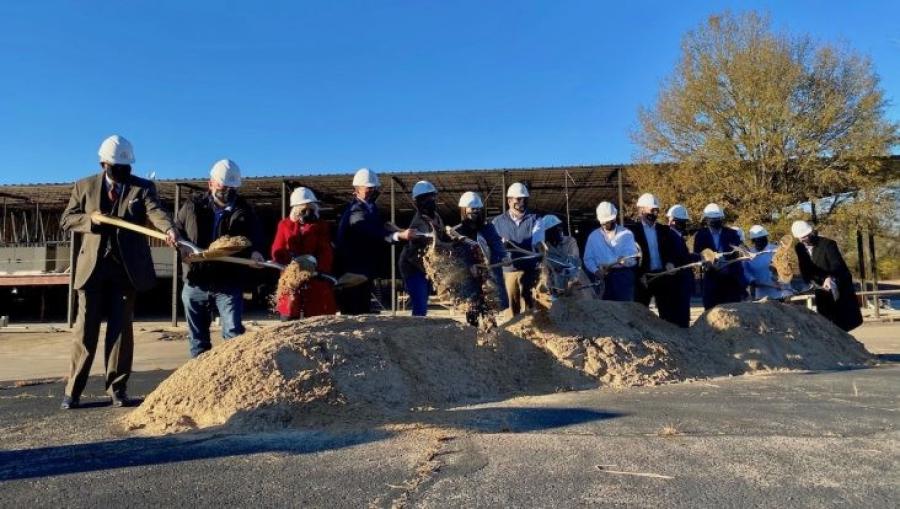 The groundbreaking ceremony held Dec. 7 for the Peak Innovation Center in Fort Smith.(University of Arkansas at Fort Smith photo)

Arkansas' Fort Smith Public Schools (FSPS) plans to open its multi-million-dollar Peak Innovation Center for the 2021-22 school year. On Dec. 7, the school system and its partner, the University of Arkansas at Fort Smith (UAFS), co-hosted a groundbreaking for the facility.

"This is a really an exciting day and one in the making for a very long time. When I think of what this facility represents, I think about partnerships," said Doug Brubaker, FSPS superintendent, at the groundbreaking.

The Peak Innovation Center will be a regional career and technology center with a focus on instructional strategies within the STEAM (Science, Technology, Engineering, Art, and Math) disciplines.

After renovations, the facility will be 160,000 sq. ft. with the availability for future expansion on its 17 acres, the school district said. Phase One learning space will be approximately 80,000 sq. ft. with a facility and equipment investment of $20 million, according to the FSPS.

Fort Smith-based Turn Key Construction Management is the project's general contractor. The cost of the building effort is anticipated be $8.4 million.

It is being funded due to Fort Smith voters approving a school millage increase in 2018, the first in 31 years, which raised the rate in the city from 36.5 mills to 42 mills. The new rate is expected to raise $120.8 million, $35 million of which will go toward district-wide safety improvements.

In February 2019, the estate of William Hutcheson Jr. donated the former Hutcheson shoe manufacturing building at 5900 Painter Lane in Fort Smith to be the Peak site. The 181,710-sq.-ft. building that sits at the corner of Zero Street and Painter Lane will save the district at least $3 million that had been budgeted to buy an existing building for the career center.

Kyle Parker, president and CEO of Fort Smith-based Arkansas Colleges of Health Education, was instrumental in acquiring the building donation for the school district.

In January, Gov. Asa Hutchinson pledged $2.1 million in state funding from the Office of Skills Development (OSD) of the Arkansas Department of Commerce to be used for advanced manufacturing equipment for the center. It was announced in September 2019 that FSPS would receive a $1.4 million federal grant from the U.S. Department of Commerce's Economic Development Administration (EDA) to help build the center. And, earlier this summer, the Gene Haas Foundation gave a $1 million grant for expansion of the computer integrated machine lab at the center.

"Because of community support, the Peak Innovation Center will deliver cutting-edge career and technology education for high school students across 22 regional school districts, as well as district-specific visual arts programming," FSPS administrators have said of the center.

Students attending the facility will receive a hands-on approach to career-focused curriculum and programming taught by UAFS faculty as an extension of the Western Arkansas Technical Center.

"Programming will provide students access to state-of-the-art equipment and industry exposure," read a press release coinciding with the groundbreaking. "Students will receive a direct connection to career opportunities in western Arkansas, and those who successfully complete these courses have the ability to earn a competitive salary upon high school graduation and will be better prepared to thrive in college."