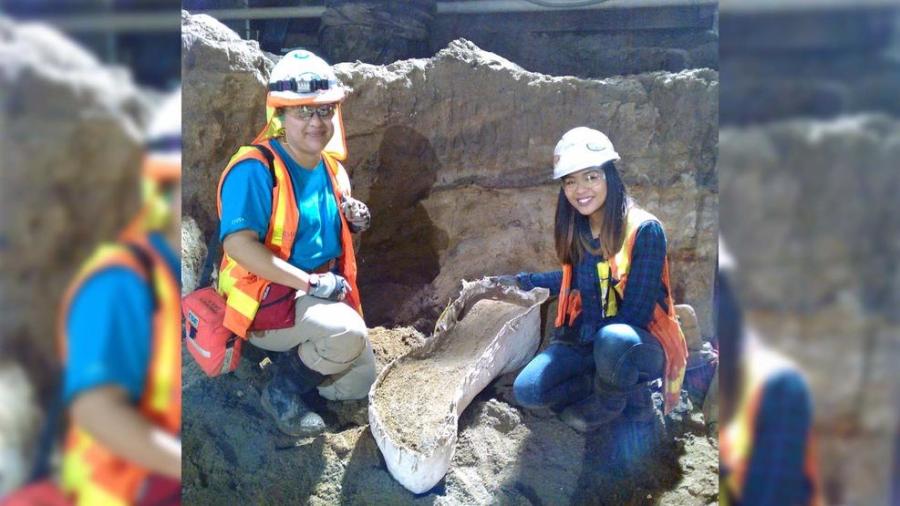 Excavation crews working on the Purple Line subway extension at Wilshire Boulevard and La Brea Avenue in Los Angeles have unearthed a pair of fossils from the Ice Age, marking the second time the project has led to the discovery of ancient remains, Metro officials said.

Crews found a camel bone and a bone from a mammoth or mastodon while digging out the future subway station on April 12 and 13, according to Metro.

Once the bones were found, the onsite paleontologist diverted digging operations away from the site to preserve the area. The bones were removed and taken to a lab in Riverside to be identified.

The camel bone was later identified as a roughly 20-in.-long radioulna, or combination of forearm bones, from an extinct Camelops hesternus.

“Camel bones are quite rare in the fossil record of our area,” said Ashley Leger, paleontological field director for Cogstone Resource Management, which is providing paleontologist services at the construction site. “We are very excited about what we might discover next in this fossil-rich area.”

The second fossil is believed to be a femur of an Ice Age elephant, either a mastodon or mammoth. The bone is about 36 in. long.

In November, excavation crews working on the subway project in roughly the same area found a tusk, tooth fragments and a nearly complete mastodon skull.

All fossils found at the site will eventually be turned over to the Natural History Museum of Los Angeles County.