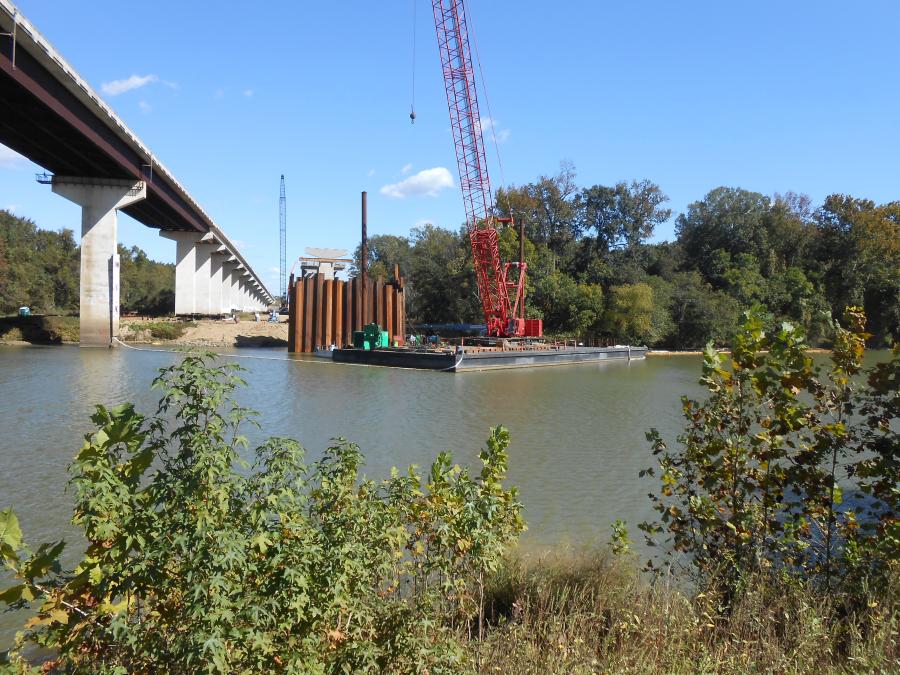 Work on a more than $29 million bridge has inched beyond the halfway point in Arkansas, on U.S. 167 near Calion. (ARDOT photo)

Work on a more than $29 million bridge has inched beyond the halfway point in Arkansas, on U.S. 167 near Calion. The new structure is considered a key link in completing a four-lane roadway from El Dorado to the Ouachita River.

“For most of our team, this is a once in a lifetime type project,” said David Archer, Arkansas Department of Transportation (ARDOT) district engineer. “We don't build very many bridges this size in this part of the state.”

The current bridge, located over the Ouachita River on the Calhoun and Union County line, will remain in place. Both bridges will handle two lanes of traffic. Because the new 3,206-ft. bridge over the Ouachita River is an addition and not a replacement, no detours are required, and traffic control is not as much of an issue. Archer said the work comes not a moment too soon for motorists.

“Prior to building the existing bridge back in the early 1990s, the river crossing had a short narrow steel truss structure,” said Archer. “Most folks avoided it and tried to find another way across the river. The travelers really welcomed the bridge, and they will be even happier to have the four-lane access the new bridge will provide.”

“The landscape will have a new look,” Archer said. “And travelers will have quicker and safer access to the area. We began widening some sections of the roadway in this area to four-lane about 10 years ago, and now are making an effort to complete all the widening between El Dorado and Little Rock.”

According to Archer, the project is moving along at a steady pace, despite some earlier complications.

“The contractor has had some challenges along the way involving excessive flooding and concrete and pile issues that have delayed the progress somewhat, but we are more than halfway complete and looking forward to a productive season of work in the days ahead,” said Archer.

The new bridge incorporates a seismic design, according to Archer.

“It has more reinforcing steel than the existing bridge, and more and bigger piling. That has created some challenges; however, when both bridges are complete, they will look identical,” he said.

High water due to some abnormally wet seasons has been among the biggest concerns on the project, along with an unexpected amount of unacceptable piling due to cracking and breaking. Production has improved, however, because of changes made.

“Crews have also experienced concrete consolidation issues with all the extra steel, due to the seismic design and the concrete plant being 45 miles away. They have had to remove and replace two caps and a column because of these issues, but have also made adjustments and are progressing acceptably now,” he said.

General contractor W.G. Yates and Sons Construction Co. of Philadelphia, Miss., was awarded the contract for the bridge construction, which began in January 2015. The project has a total of 400 working days, with all work expected to be completed by mid-2019.

Currently, workers are driving piling and constructing footings, columns and caps, and will likely set more girders soon. Crews constructed one section of the deck last month, and have almost completed one of the two cofferdams in the river. They are hoping to make significant progress on the two river piers in the coming months.

Archer said weather, specifically rain, has been a concern during construction, forcing workers off the job from time to time.

“The river has been unusually high during this project, and caused some delays,” Archer said. “Piling work and footing work are nearing completion, which means most of the work will be above the water line, so to speak. We look forward to a more productive work season, in the days ahead.”

The job site was low and wet.

“This bridge is in the Ouachita River bottoms,” said Archer. “We are building two additional lanes basically in the borrow ditch of the existing roadway. Mud was frequently encountered.

“The borrow ditches required significant undercut, and we have utilized a substantial amount of stone backfill to provide stability for constructing the approaches to the new bridge.”

The project calls for 46,000 tons of stone backfill and 160,000 cu. yds. of embankment. Most of the dirt work is substantially complete.

Archer said a variety of heavy machinery is needed to carry out the assignment.

“There are currently five cranes on the job, and a number of track hoes and dozers. We have utilized concrete pump trucks and asphalt laydown equipment. The contractor has one of the cranes on a barge in the river. There are lots of concrete trucks and dump trucks, as well as dirt work equipment.”

As for the most time-consuming part of the project, Archer said, deals with oversight.

“The department is responsible for construction inspection and project oversight. Resident engineer Bill Hockaday and his crew keep all the records and assure compliance with specifications and provide general oversight of the entire project. This work keeps them very busy,” he said.

When the new bridge is completed, all traffic will be rerouted from the old to the new bridge, so that workers can close the current bridge to allow highway department workers to redo some of the off and on approaches.

“We are going to do a little work to the approaches on the existing bridge; however, we anticipate switching southbound traffic from the inside lane to the outside, and doing one lane at a time and not ever having southbound traffic on the new bridge,” Archer said. “This work should not take very long to complete.”

According to Archer, dealing with motorists has not been much of an issue for crews.

“We have not had to do too much with the existing traffic patterns yet, since all the work has been basically on new location. The river traffic is minimal. However, the barge does have proper lighting mounted on it so it can be seen by any river traffic.”

Keeping everyone out of harm's way is considered a top priority for the team.

It's been almost 90 years since the original U.S. 167 bridge over the Ouachita River was constructed. The Ouachita River Bridge at Calion was a prime example of the cantilever design used in Arkansas in the late 1920s and early 1930s. The bridge also was significant because it united the southeastern and southwestern quarters of Arkansas, which the Ouachita River separated. In addition, it opened a direct route from Little Rock to El Dorado.

The river below is named for the Ouachita tribe, one of a number of historic tribes who lived nearby. Washita is an Indian word meaning “good hunting grounds” and “sparkling silver water.” The river is 605-mi.-long, running south and east through Arkansas and Louisiana, joining the Tensas River to form the Black River near Jonesville, La. Starting in the Ouachita Mountains near Mena, Ark., the Ouachita River flows east into Lake Ouachita. The North Fork and South Fork of the Ouachita flow into Lake Ouachita to join the main stream.

As work moves forward on the new bridge near Calion, ARDOT officials are mindful of the countless motorists who will benefit from the addition, upon completion.

“It's an incredible experience to see all the pieces come together as we construct a structure that spans from one county to the next, and helps people get 'over the river and through the woods' to where they need to be,” said Archer.