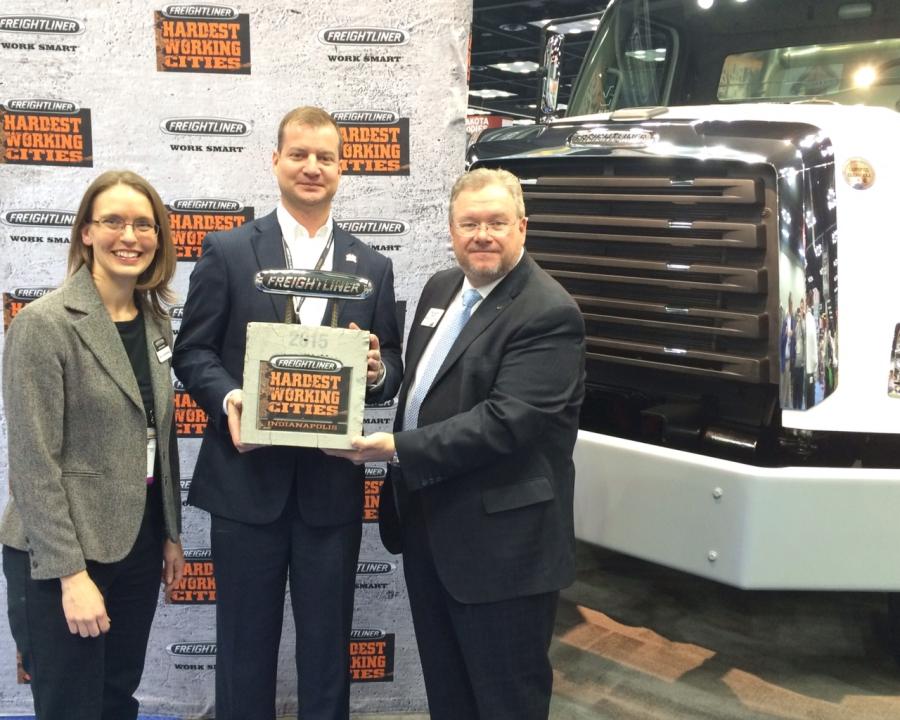 (L-R): Mary Aufdemberg, Brian Gildea and Richard Saward at the 2015 NTEA Work Truck Show for the lauch of HWC program.

“It's exciting to be back in Indianapolis a year after crowning it as a Freightliner Trucks Hardest Working City,” said Richard Saward, general manager, Daimler Trucks North America. “This program has made us more aware of what work trucks, and its owners, can achieve for communities and, as a leader in vocational trucks, we're proud to stand behind this program.”

In each city, Freightliner coordinated an award presentation to city representatives and identified major work sites in the area to surprise workers with a well-deserved break that included free food and Hardest Working Cities gear. To date, Freightliner has visited 12 work sites and thanked about 800 workers across six cities.

After a successful first year for the recognition program, the company announced four new cities will be recognized in 2016. The award winners for this year will be: New York City, Charlotte, Edmonton and Seattle-Tacoma.

To find the Freightliner Trucks Hardest Working Cities, approximately 400 metropolitan census areas in the United States and Canada in 11 different data categories were reviewed. The data categories ranged from impact on overall gross domestic product to growth in employment to the number of jobs in key industry sectors including construction, manufacturing and logistics.