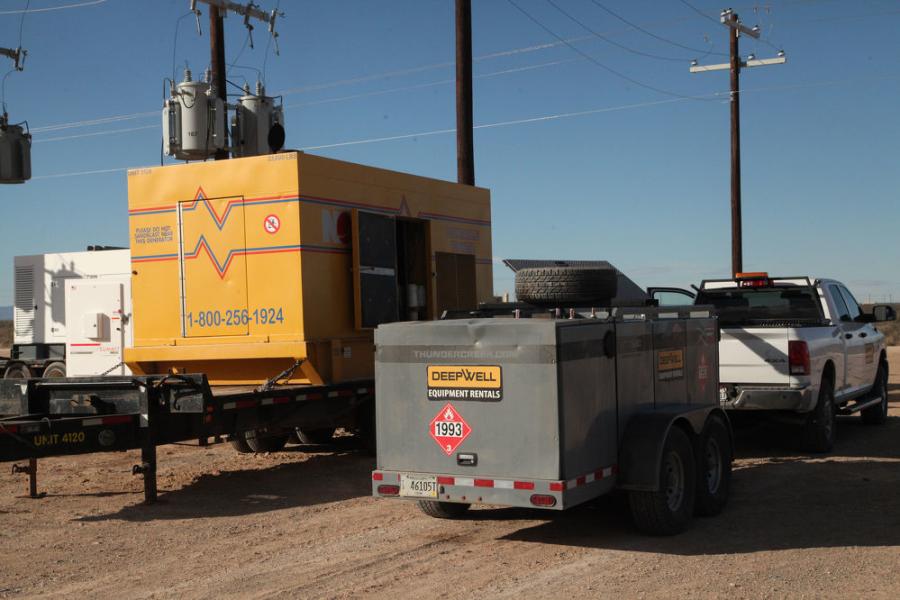 “You’re not going to get a fuel tanker to go and fill up a 50-gallon tank,” said Kyle Comeaux, DeepWell’s operations manager. Instead, DeepWell turned to Thunder Creek Equipment’s 690-gal. multi-tank trailer (MTT 690).

It takes a lot of fuel to power the west Texas oil boom that's driving U.S oil production to record levels. In Pecos, Texas, located in the gut of the Permian Basin, DeepWell Energy Services is responsible for the housing — trailers and skid houses, mostly — and service equipment that support each of those sites. This includes the upkeep and fueling of generators, fresh water tanks and light towers.

DeepWell started working in the Permian Basin in 2014, said Kyle Comeaux, the company's operations manager. At that time the rental division, which supports all client living quarters, had one client. It now has as many as 30 at one time.

For DeepWell, business is booming. So is its fuel consumption.

At peak capacity, DeepWell had four technicians and four vehicles running fuel routes with 100-gal. tanks for a whole workday. The company was at an inflection point where Comeaux was faced with the decision of adding up to four more drivers and four more vehicles — including upkeep and maintenance — to keep pace with demand. 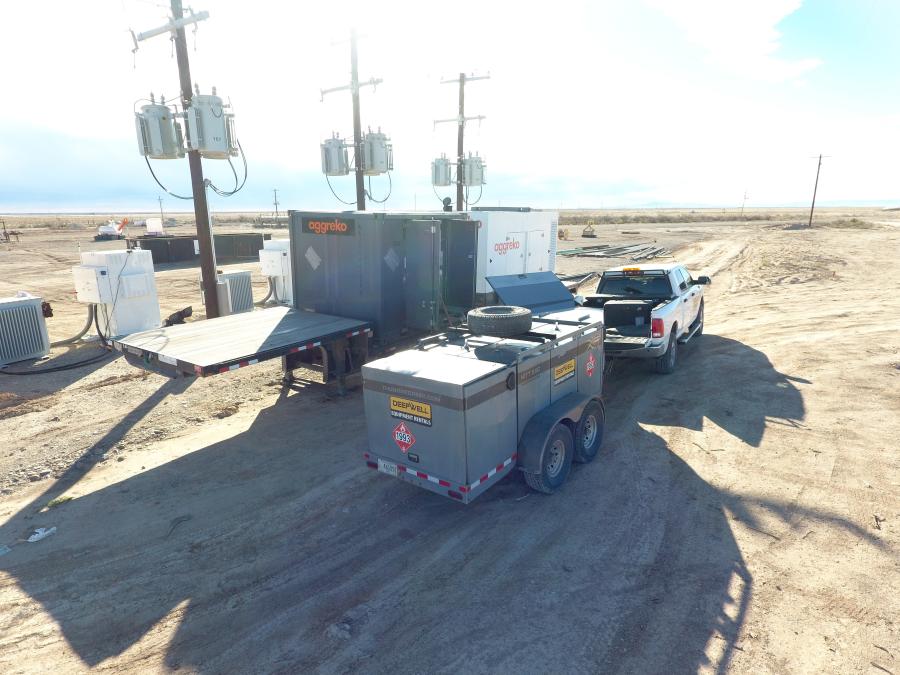 "Our old process would leave us shorthanded with all those trips going back and forth to the fuel pumps," Comeaux said. "We were doing that every three days and we were at 100 percent capacity. It was to the point where we were going to hire three or four more people and purchase three or four more vehicles. The hardest thing to swallow was that when we didn't have the guys running fuel, they were not generating revenue."

Not only was the fueling process cumbersome and inefficient, it also didn't sync with DeepWell's needs. The company uses a mix of generators to power each of the living quarters, ranging from 45 kW to 1,000 kW, and corresponding fuel consumption between 50 to 500 gal. per day. When the company hit its capacity threshold, outsourcing to a fuel tanker service wasn't an option.

"You're not going to get a fuel tanker to go and fill up a 50-gallon tank," Comeaux said.

Instead, DeepWell turned to Thunder Creek Equipment's 690-gal. multi-tank trailer (MTT 690). This proprietary design allows contractors to haul bulk quantities of diesel in a trailer that can be towed to job sites behind a pickup truck — and by a driver who is not required to have a HAZMAT or commercial driver's license (CDL). Most importantly, it saved the company considerable additional investment in capital equipment and tough-to-find labor.

"This one trailer saves me from having to get four or five more employees, four or five more vehicles, four or five fuel tanks and fuel pumps," Comeaux said. "There's also total accountability. With the GPS tracking (added by the company after purchase), we know where it's at all the time. It saves on transportation, saves on insurance and saves on manpower."

Efficiency That Pays for Itself

With the company's new MTT 690, DeepWell reduced its fueling staff to just one man who makes fuel runs every day, accounting for between 2,500 and 3,000 gal. being delivered daily. That driver isn't required to have a HAZMAT endorsement or a CDL due to the one-of-a-kind design of independent 115-gal. tanks connected only through a common manifold at the front of the trailer that completely segregates each tank unless all ports on the manifold are opened. 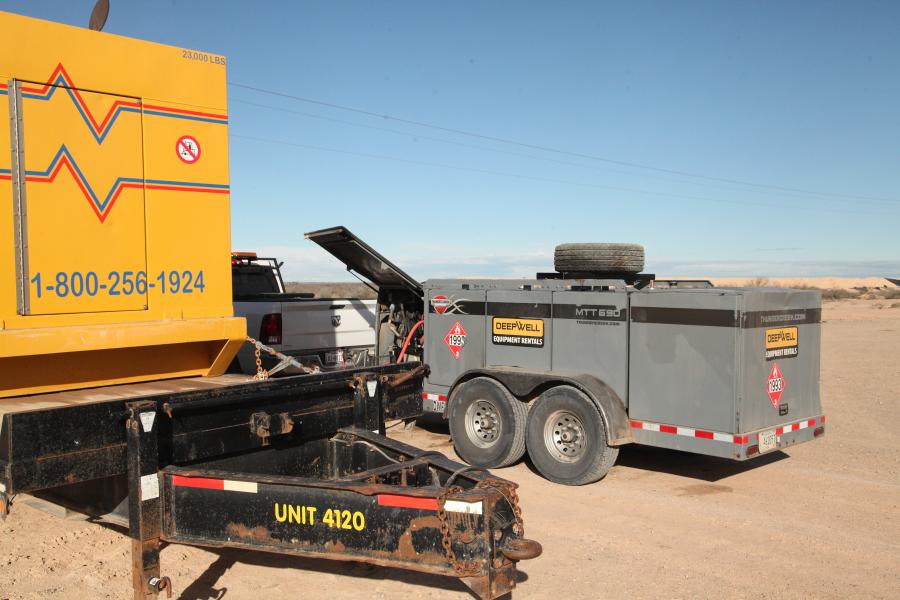 "It's a perfect size. We don't need a big tanker, and it's also impractical to have six pickup trucks making runs with 100-gal. tanks," Comeaux said. "We have one guy, the Thunder Creek MTT and a three-quarter ton pickup. That's all we need right now."

"100 percent of the fuel that we run is done with that one trailer," Comeaux said. "We are rotating drivers for that single tank 14-to-18 hours a day just trying to keep up. In just two trips from our yard to each of the work sites, we can take care of the largest generators for between 24 and 48 hours.

"We have two more new trailers on order and we know that they will be paid for in two months."

Customizing Every Feature for the Future

DeepWell had its MTT outfitted with a 100-gal. diesel exhaust fuel (DEF) tank at the front of the trailer, and a rear utility box decked-out with a greasing system.

DeepWell made the decision to add the DEF system based on industry trends but may end up swapping that system for a hydraulic oil setup in the future. The rear utility box has been a major plus for the operation.

"It's pretty handy," Comeaux said of the grease gun and utility box. "95 percent of our fuel delivery is for generators, but we do have equipment in the field. So instead of dispatching a mechanic for greasing and servicing, when the fuel trailer delivers the fuel on a particular site, they can take care of the light maintenance and scheduled maintenance."

Mobility Is Key in the Heart of West Texas

The roads of the Permian Basin can be rough. Some of DeepWell's customers have 20 mi. of unpaved roads to get in and out of each job site. Its Thunder Creek MTT stands up to the elements.

"It's built stout, I can tell you that," Comeaux said. "We don't think twice about it. When a customer calls and they need fuel, we don't have to worry about Department of Transportation hours, or getting a driver with a CDL. You just get a guy who can take a 30-minute break and he just goes. You don't have to wait in line at a fueling station. They fill up at our tanks here on site and go.

"Most importantly, our customers are happy, which is the number one goal."

Brass Knuckle SmartShell Safety Glove Does It All