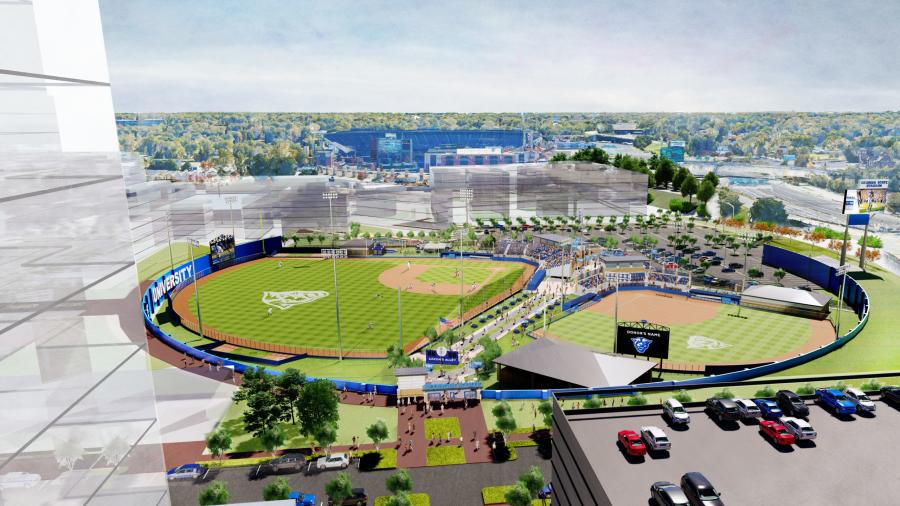 A rendering of GSU’s plans for its baseball and softball fields. The Hank Aaron tribute would be at the main entrance to the facility (Georgia State University rendering)

Atlanta's Georgia State University has decided to build new baseball and softball facilities — both of which will carry heavy significance.

The athletic fields are set to be constructed near the site of the old Atlanta-Fulton County Stadium, the site where Braves' slugger "Hammerin Hank" Aaron launched his record-breaking 715th career home run in 1974.

The Signal, Georgia State's independent student newspaper, noted that Aaron's legacy transcends sports and is a symbol of civil rights and equality for all. Following his death in January, the university first announced its intention to build a museum in honor of his legacy.

Now, Georgia State is closely working with Aaron's widow, Billye Aaron, on the design for the stadium, the newspaper reported in late June. His memorial will be erected directly between the baseball and softball facilities as a year-round tribute to the American icon. His legacy will be at the center of the new stadium to highlight the heritage of Aaron's contribution to and impact on Atlanta.

As a right fielder, Aaron played 23 seasons in Major League Baseball from 1954 through 1976. All but two of those seasons were with the Braves, first in Milwaukee and, beginning with the team's move south, in Atlanta from 1966 through 1974.

In a game between the Braves and the Los Angeles Dodgers on the night of April 8, 1974, before a huge national television audience and 54,000 people in attendance at Atlanta-Fulton County Stadium, Aaron slammed his 715th career home run to break the long-standing home run record he shared with New Yankees' legend Babe Ruth. He retired from the Milwaukee Brewers after the 1976 season with 755 home runs, a record that stood for 33 years.

Aaron was inducted into the Baseball Hall of Fame in 1982.

Georgia State estimates the cost of the memorial will be in the $10 million range and will be privately funded. The stadium will be much larger than the university's current facilities in Panthersville that holds 2,500 fans and is located far from the downtown Atlanta campus.

However, The Signal noted that the new combined fields also will keep parts of the old stadium intact to ensure that the history of Aaron is alive and thriving.

Many people told the newspaper that the construction of a new stadium for Georgia State Panthers baseball and softball is long overdue.

Both programs have been seeking to make a mark on their respective sports. In particular, the baseball program is coming off a season that saw impressive wins over the likes of Georgia Tech and Vanderbilt.

"The new stadium will definitely help put GSU baseball on the map," said Ben Moore of 247 Sports, an online college athletic recruiting service. "The program will get a boost playing in the downtown campus."

Panthers head baseball coach Brad Stromdahl also told The Signal that he believes the new stadium will aid in bringing recruits to his program and add to its foundation while also cherishing Aaron's legacy.

"I'm looking forward to the new stadium and the Hank Aaron Museum," he said. "[Aaron] is an iconic figure and to honor him at our new facility is great for our program and the city."

GSU Director of Athletics Charlie Cobb said in January that the baseball and softball stadiums are "the next piece of the puzzle" in Georgia State's quest to create an athletic campus that included the repurposing of Turner Field (the Braves' home immediately after Atlanta-Fulton County Stadium was demolished in 1997) into the home of GSU's football team. It has since been renamed Center Parc Stadium.

There is no date to break ground on the new athletic facility and memorial, but Cobb told SaportaReport.com, an Atlanta news site, that estimates were that it would take 12 to 18 months to construct them once the money is raised.