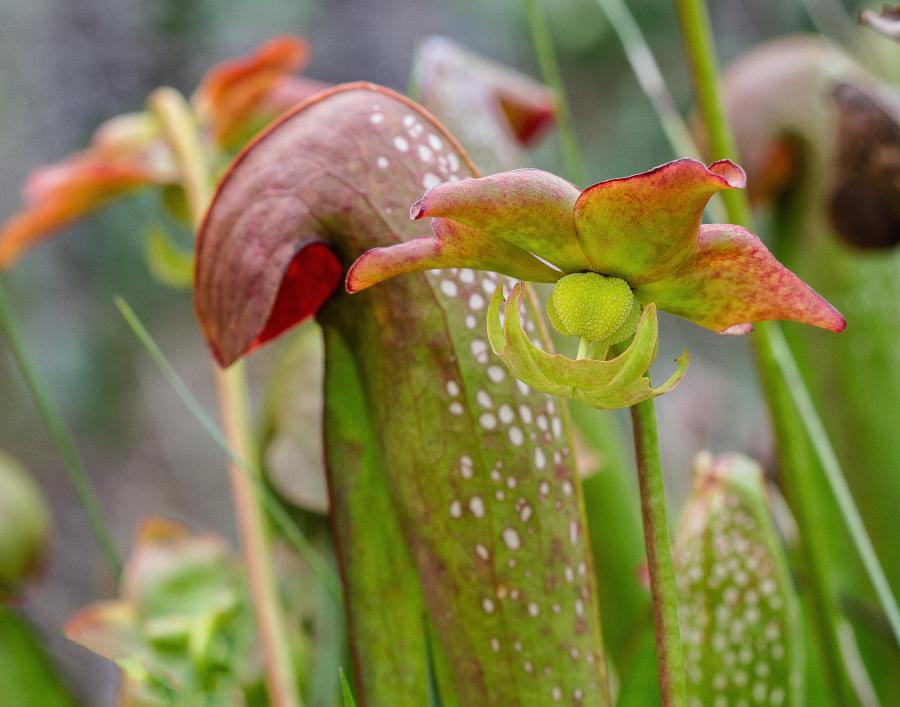 Although seven out of the eight pitcherplant species found in the United States are native to the state, according to the Georgia Department of Natural Resources (GADNR), all are considered rare, vulnerable, threatened or endangered. That has put them on Georgia's protected plants list and they are sheltered by the state's Wildflower Preservation Act of 1973.

The discovery of a rare, state-protected plant species growing along Georgia State Route 31 could lead to more legwork for an upcoming project by the Georgia Department of Transportation's (GDOT).

Lanier County Sheriff Nick Norton reached out to the GDOT in mid-August expressing concern over uncut grass on both sides of the Valdosta-Lakeland Highway, and the state agency informed him about its environmental study under way.

The study is a routine, preliminary process carried out before any future GDOT roadwork project, such as the SR 31 work tentatively planned for 2022. Engineers are analyzing the existing environment in the area before committing to the drawing board.

GDOT's plan for SR 31 is to widen the road by at least 12 ft. at four locations to add 1 mi. passing lanes: two in Lowndes County and two in Lanier.

"It'll just be a three-lane section at each of those locations," Jason Willingham, a district pre-construction engineer of GDOT, told WCTV.

During their preparatory environmental study, Willingham and his team came across carnivorous hooded pitcher plants along the road and halted further lawn care in the area.

"That's why there were sections not mowed because we're trying to avoid those particular sections where those plants are located," he explained. "If there are impacts to protected plants or any protected species, then we're just going to try to mitigate those impacts."

Willingham has been with GDOT for 13 years and in that time, he said he has never personally encountered pitcher plants on any other project in southern Georgia.

Although seven out of the eight pitcherp lant species found in the United States are native to the state, according to the Georgia Department of Natural Resources (GADNR), all are considered rare, vulnerable, threatened or endangered. That has put them on Georgia's protected plants list and they are sheltered by the state's Wildflower Preservation Act of 1973.

"GDOT'S mission is to deliver a transportation system, but we're also good stewards of the environment," Willingham said. "So, we always do our due diligence to try to evaluate environmental impacts wherever we're doing a project."

He added hooded pitcher plants seed and begin to grow throughout the summer, and the transportation department is supporting the process by not mowing.

Gretchen Quarterman, a 10-year "Master Gardener" and the executive director of the WWALS Watershed Coalition, explained that hooded pitcher plants live in nutrient-poor bogs, or wetlands. They trap and consume insects to obtain nutrients for survival.

"When a bug goes in there, that [top hood] closes up and is sticky on the inside, so they can't get away," she said. "Then the bug gets decomposed and digested by the plant."

Quarterman has had her own pitcher plant for about six years and said the best way to obtain one is by buying it from a special "native plant nursery" that is licensed to sell the species.

But to find new clusters of the protected plants growing in the wild looks to Quarterman like environmental progress. Still, she recommends never touching them in their natural habitat.

As part of the next step toward GDOT's Highway 31 project, engineers will reach out to the state's natural resources department for guidance on what to do with the plants.

Willingham said his agency is looking into either moving them, planning construction around them or building an even better environment for them to thrive in.

"I'm happy to know that GDOT is protecting them," Quarterman added.