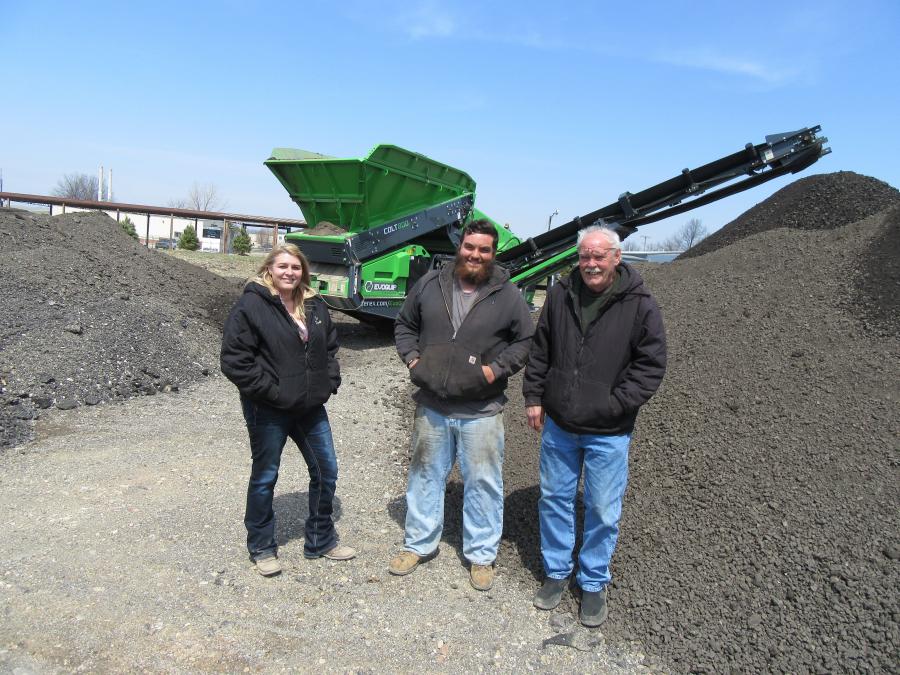 (L-R): Windy, Isaac and Steve Geiger are impressed with the quick set up, versatility, fuel economy and production volume of the EvoQuip Colt 800.

Steve Geiger of Geiger Excavating Inc. has learned quite a bit about running a successful recycling operation since purchasing his first landfill in 1988 as his entrée into real estate investments — and among the many lessons he learned back then that holds true today is that it's best not to judge a book by its cover.

Ohio saw a landfill as a $4-million expense, which is what it would have cost to go through the final closing process. Geiger saw the landfill as an opportunity — he would reclaim the site and sell the property for business development.

Working closely with the Ohio EPA to ensure that he was in full compliance, Geiger set about installing the final cap consisting of dirt built up to a depth of 2 ft. from which core samples were taken for verification.

In total, meeting the cap requirements took over a million yards of dirt.

During the process, Geiger came up with the idea to take in additional materials to be recycled into usable product to supply the construction projects. Ultimately, the operation turned out to be a winning combination for all involved — the state saved on closing costs, construction companies delivering asphalt, concrete, unwanted fill dirt and overburden were able to leave with gravel for construction projects, and Geiger had a property that sold for local business development, contributing to the local economy.

It's a business model that Geiger has repeated and refined over the years, creating a family-owned and operated company with seven employees supplying quality recycled products for use on job sites throughout the Columbus area.

Finding a Future With EvoQuip

Geiger was reminded of the lesson he'd learned about making judgements based on appearances when Sean McIvor of Aggcorp recommended replacing his old screener, which required ongoing repairs, with an EvoQuip Colt 800 screener.

Geiger had worked with Aggcorp and McIvor in the past for parts needed to maintain his equipment, and he had gained a great deal of respect for both the dealership's owner and for the dealership itself. Geiger was impressed with McIvor's knowledge and came to rely on him as a valuable resource for information. For example, Geiger recalled having continual issues with a crusher belt; McIvor inspected the machine and suggested a different belt that completely resolved the problem. 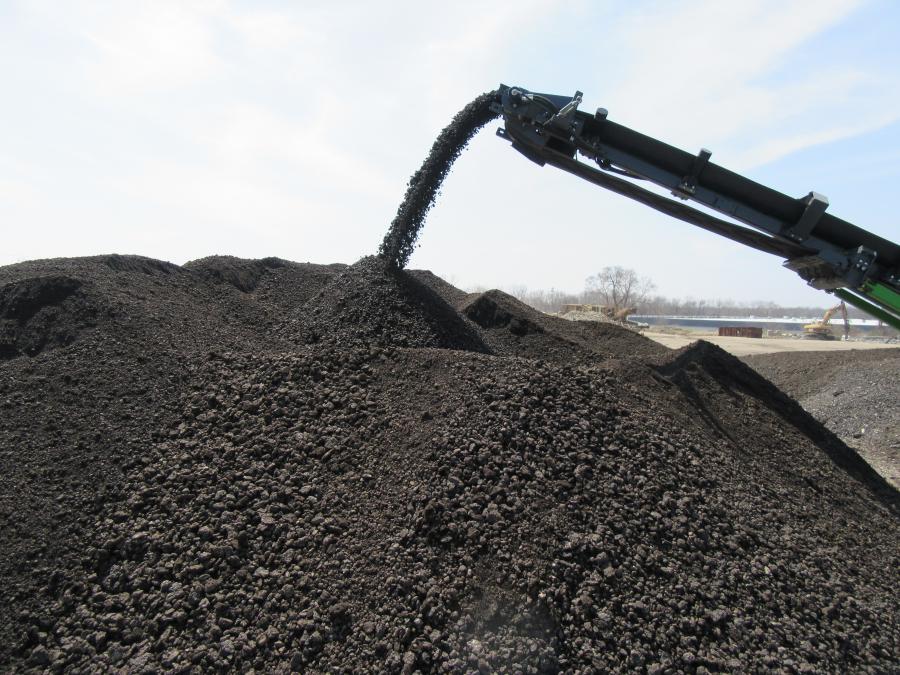 Consequently, when McIvor recommended the EvoQuip Colt 800 screener, Geiger agreed to a six-month rental of the unit.

But Geiger was initially skeptical when he saw the machine pull into the yard — it seemed too small to be capable of carrying the work load he needed for his operation. Despite his reservations, however, he put the EvoQuip to work and was immediately impressed. He was initially planning to use the machine primarily for screening topsoil, but upon seeing the universal capabilities of the machine, he decided to try it out with gravel. To test out the machine, they did what they could to stall it but quickly found that they were incapable of bogging the machine down.

Geiger was so impressed with the machine that he decided to make it a permanent part of his fleet. 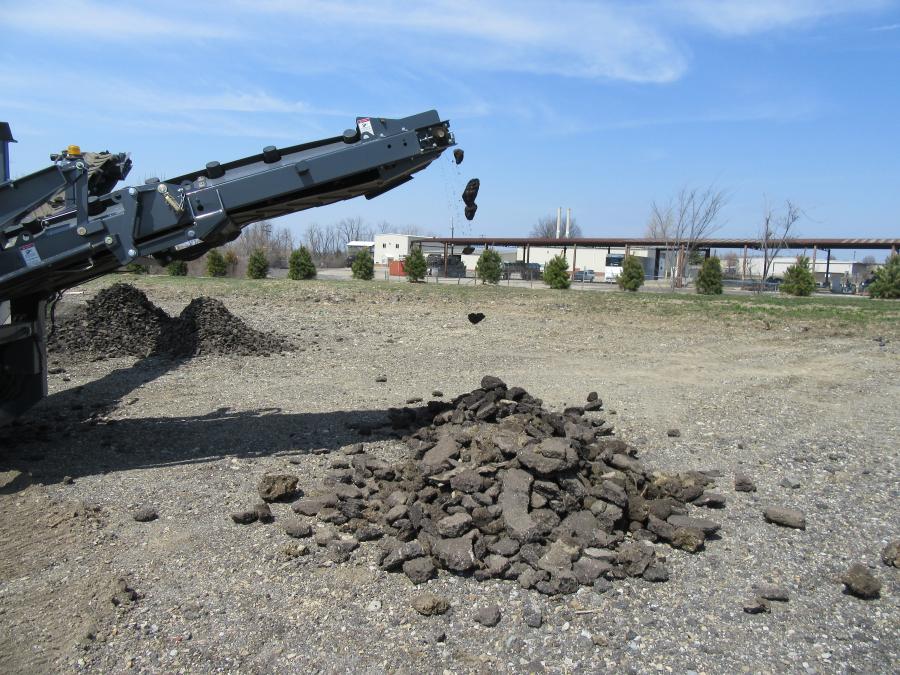 The EvoQuip Colt 800 Screener's compact size, ease of transport, quick set-up time and ease of operation is ideal for small to medium sized operations. A compact and aggressive forward facing incline scalper, the plant is versatile and can work in aggregates, sand and gravel, top soil, construction demolition and recycling applications, according to the manufacturer.

According to Geiger, the screen is extremely active, generating a high volume of materials. The screenbox can handle a variety of media, including bofor bars, finger screens, woven mesh and punch plates. The screen is so active, he said, that in addition to higher volume, the machine actually delivers better sized product.

Geiger found that changing screens is a quick and easy procedure, likening it to “a transformer from the movies.”

Geiger also found that in addition to the EvoQuip versatility and high production output, which can reach 3,000 tons of asphalt a day, the machine's fuel efficiency also contributes to its profitability. He estimates he uses about a third of the fuel that was required with his previous machine.

EvoQuip is a Terex Brand line of crushers and screeners billed as “Compacts with Impact.”

Geiger's current operation, a landfill purchased in 2009, is a 30-acre site located southeast of Columbus at 1041 Enterprise Drive in Gahanna, Ohio.

The company maintains operations year-round, rain or shine, producing approximately 250,000 tons annually, with the EvoQuip Colt 800 doing most of the processing work. Geiger marries the EvoQuip with a crusher and the screener can handle all the volume the crusher can put out, he said. With this setup, they only need a loader for the oversized material.

Geiger Excavating is among the few recyclers in the area to successfully produce recycled 57's out of concrete to be approved by the city of Columbus. The company's product line includes topsoil and compactible clay and as well as recycled 57's. Its recycled products include 304, 2's, 4's and 310A, and 304 spec. milled asphalt.

From rental of the EvoQuip Colt 800 screener on through to its purchase, Geiger's enthusiasm for the machine is matched by his appreciation for his working relationship with Aggcorp.

Headquartered in Cleveland, Ohio, at 22800 Lakeland Blvd., the 65,000 sq. ft. facility houses 14 cranes with up to 50-ton capacity and a plasma cutter with eight torches. The dealership has Kenworth crane trucks available for onsite service and a second location opening in Detroit.