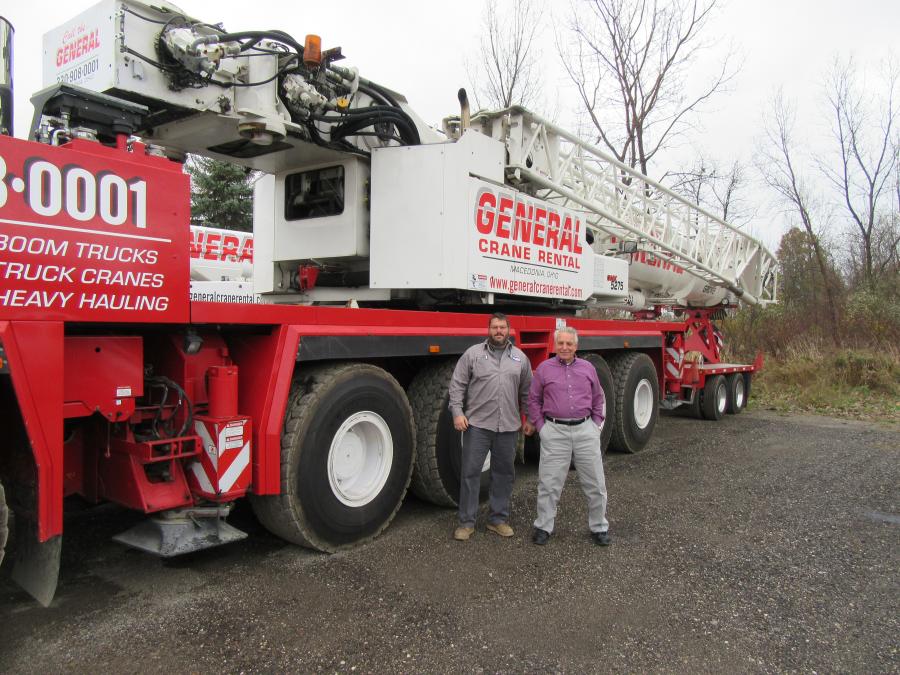 For Dan Manos, owner of General Crane Rental LLC, relationships and growth are the two driving factors behind his approach to operating his business. Manos began his career working with his father at age 16 and credits his father and uncle for teaching him the majority of what he knows about steel erecting and crane rental. This experience also helped him develop relationships with key players in the industry long before starting his own business in 1988.

Early in his career, Manos showed a mechanical aptitude and landed a job as an ironworker. He enjoyed the job, but after seeing three of his coworkers fall, he made the decision to become a member of the Operating Engineers and continue his employment with his father for the next 19 years operating and assembling cranes until it was time to move on and start his own business. Manos started out with an 18-ton crane and a 35-ton crane, operating one crane while dispatching the other.

The relationship Manos developed with James Mirgliotta, a principal officer of Forest City Erectors, proved to be invaluable during the formative years of his career. Manos met Mirgliotta while working as an ironworker, and many of his initial jobs came as a result of that relationship.

In addition to relationships with his customers, which range from steel erectors and machinery movers to carpenters and electricians, Manos also attributes his company's growth to his employees. In 1998, he brought in his office manager, Karen Harnar, which allowed him to focus on building the business.

Additionally, Bob Krenciglova, General Crane Rental's general manager, who has been with the company for eight years, has helped to spur growth. The company now employs approximately 20 to 25 individuals, including licensed and certified operators, oilers and mechanics.

The Grove GMK5275 is the largest crane in the fleet, and it was part of a three-crane package purchased from Ohio Grove dealer, Cleveland Crane & Shovel. The purchase met both of his criteria in regards to relationships and growth. Manos has a 40-year relationship with Cleveland Crane and Shovel and after the receipt of the three cranes mentioned above, Manos is currently in negotiations for the purchase of a Grove GMK6400, 450-ton (408 t) all terrain crane with 420 ft. (128 m) tip height.

Manos also has a long-standing relationship with Grove cranes.

“I met John Grove when I was working for my father,” said Manos. “He purchased one of the first Grove TM 120 12-ton truck cranes in the United States. At the time, my father told me that hydraulic cranes were destined to be the cranes of the future.”

Over the years, Manos has watched the evolution and growth of Grove cranes and continues to be impressed with the company's engineering and build quality.

“Grove is a proven product, and engineering innovations have enabled the company to offer cranes with reduced weight, outstanding mobility and quick assembly and disassembly time,” said Manos. “Grove cranes also stand out in terms of maintaining their value.”

As for company growth, the new Grove 275-ton all terrain crane is one of the largest Grove cranes in northeast Ohio and positions General Crane Rental for work that, in the past, was beyond its scope. Job applications for the Grove GMK5275 include bridge beam placement, box culvert work, high rise building air conditioning placement, new construction, plant maintenance, pre-cast, tunneling work and steel erection.

As Grove's newest crane introduction, the five-axle AT class crane is equipped with a 223-ft. (67 m) seven-section, full-power Megaform boom with TWIN-LOCK technology and luffing jib. The 275-ton capacity crane can lift loads up to 354 ft. (107.9 m) with inserts and jib. Standards include automatic transmission, MegaTrak independent suspension and tilt cab.

The MegaTrak independent suspension and all-wheel steer system designed to ensure that, in rough terrain work environments, all wheels remain on the ground. The system also provides excellent jobsite maneuverability and ground clearance that avoids the need to raise the chassis. The patented Twin-Lock boom pinning system is designed to reduce weight while increasing boom strength and durability. The Electric Crane Operating System (ECOS) monitors lifting conditions on a full graphic display that includes load charts.

The Grove GMK5275 is powered by a Tier III, Cummins QSX15 6 cylinder turbo diesel engine, which is easier to work on and has greater parts availability.

According to Manos, the crane was set to work quickly and has been a great value for the company.