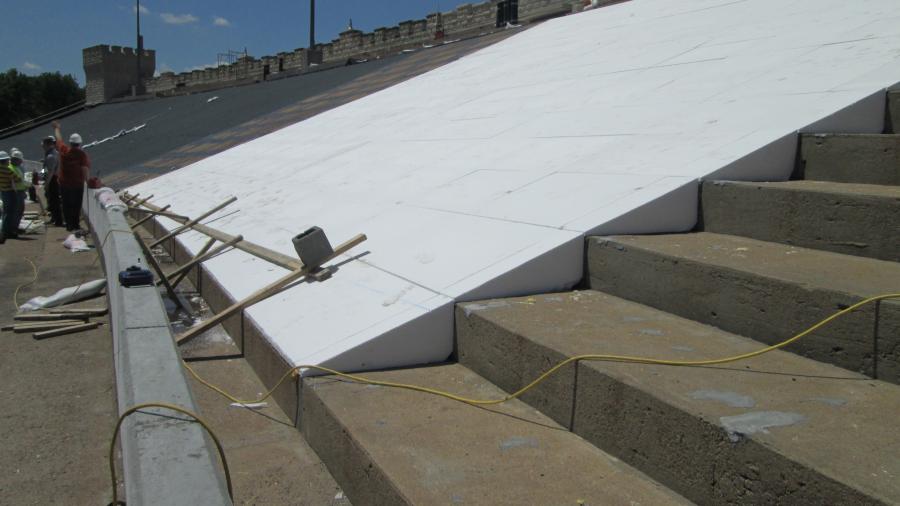 When the structural revitalization of Kansas State University's Memorial Stadium began in November of 2013, engineers and builders turned to a unique construction material to solve some complex engineering challenges. The renovations have transformed the stadium's wing buildings into a fully modern black box theater on one side and a new student services center on the other. After deciding to reuse the majority of the stadium's concrete riser seating as green roofs for the buildings below, a lightweight material was needed. The solution, Foam-Control EPS Geofoam from ACH Foam Technologies.

“Initially, the thinking was to patch the concrete and then cover the stands with a layer of soil to develop the desired contours of the green roofs,” said Sean Zaudke, vice president of Gould Evans, designers for the west stadium's transformation. “However, when the structural loading report came back it was clear we couldn't add a tremendous amount of weight to the roofs and still comply with today's building code requirements.”

Made from engineered expanded polystyrene (EPS), at approximately 1-percent of the weight of traditional earth materials, Foam-Control Geofoam provided a lightweight way to fill in the space between each row of seating. Foam-Control Geofoam also has a tremendous R-Value that remains constant over the product's entire life cycle and doesn't absorb infiltrating water —both of which make it a great roof insulation, according to the manufacturer.

On the construction side, the biggest challenge was the stadium's concrete risers that had been poured nearly a hundred years earlier. Built using an antiquated construction methodology, weather and the passage of time had taken a toll, resulting in no two steps being exactly alike.

“Figuring out the contours of all the steps was really quite a puzzle,” said Curtis Calvert, project manager of Hutton Construction.

Calvert credits the roofing subcontractor for precisely determining the most efficient way to cover the slope without much material or labor waste.

“During preconstruction, the installer came out and mapped every inch of the stadium, which allowed each piece of Geofoam to be cut and configured to a specific placement on the slope,” he said.

Today, construction is complete, and the stadium's vegetation has rooted. In the fall of 2016, new students experienced the centralized services of the Berney Family Welcome Center for the first time and the revitalized Purple Masque Theater on the other side has also thrived.