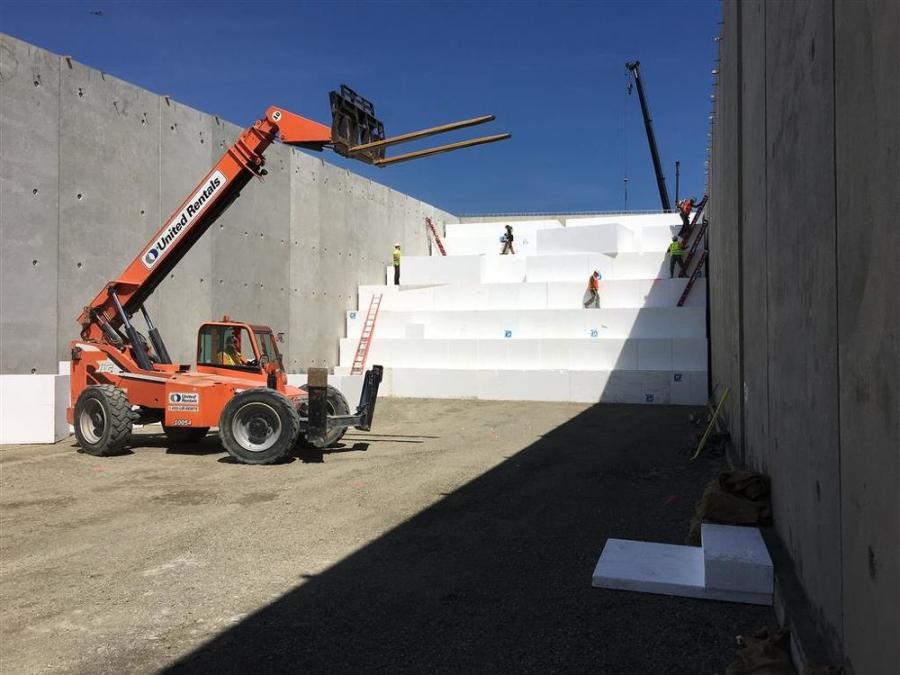 Crews place geofoam blocks in between the walls of the abutment on SR 167. (WSDOT photo)

The Washington Department of Transportation (WSDOT) is saving time and money on a transportation safety project by using tons of Geofoam to build a ramp for direct connections from one freeway to another.

On HOV/HOT lanes near Renton, drivers must cross numerous general-purpose lanes to get off one highway and onto another. But a new flyover structure due to open in coming months will make travel much simpler and safer. 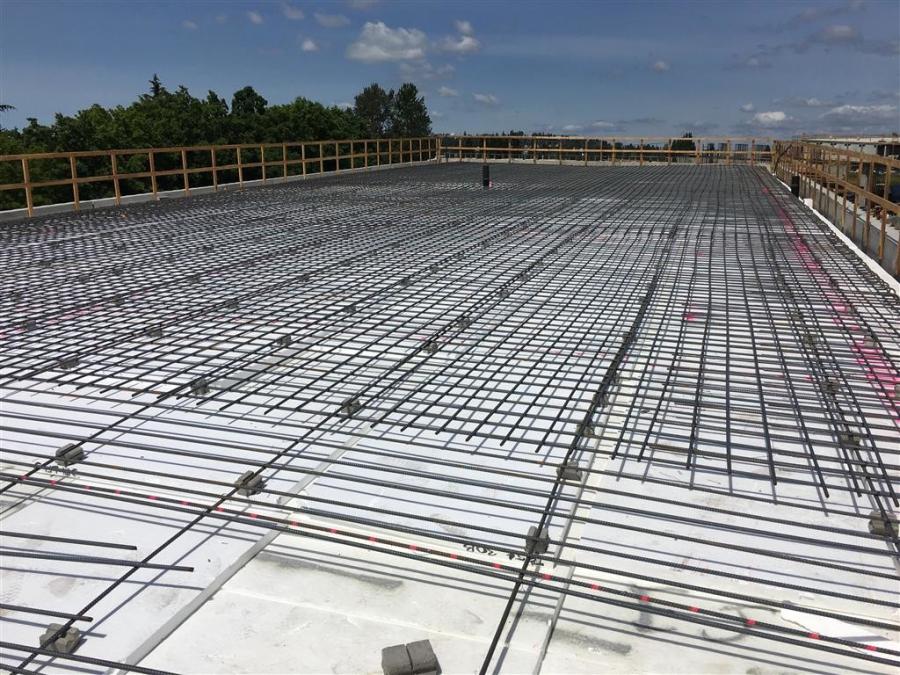 “We have the HOV lanes in the center for both highways and so prior to this job, it required [crossing lanes of] traffic. If they are coming northbound on SR 167 and want to get on I-405 to get out of the HOT lane on 167, they have to cross three lanes of traffic to get on northbound ramp,” said project manager Gil McNabb. “What this does with the new flyover structure is allow drivers to continue in the HOV lane. It's a great safety mobility improvement to eliminate that cross over. It's the same in the southbound lanes. If people are heading south and continuing on 167, they would have to cross four lanes of traffic on 405. Then they have to move back over to the HOT lane. We refer to this job as a direct connector. For those HOT and HOV lanes, this connects them directly in both north and south directions.”

WSDOT broke ground on the $116 million project two years ago with Guy F. Atkinson Construction LLC of Renton, submitting the “apparent best value proposal of $115.9 million to complete design and construction” of the project. Completion is scheduled for mid-2019 with the new connector opening to traffic as early as the end of 2018. 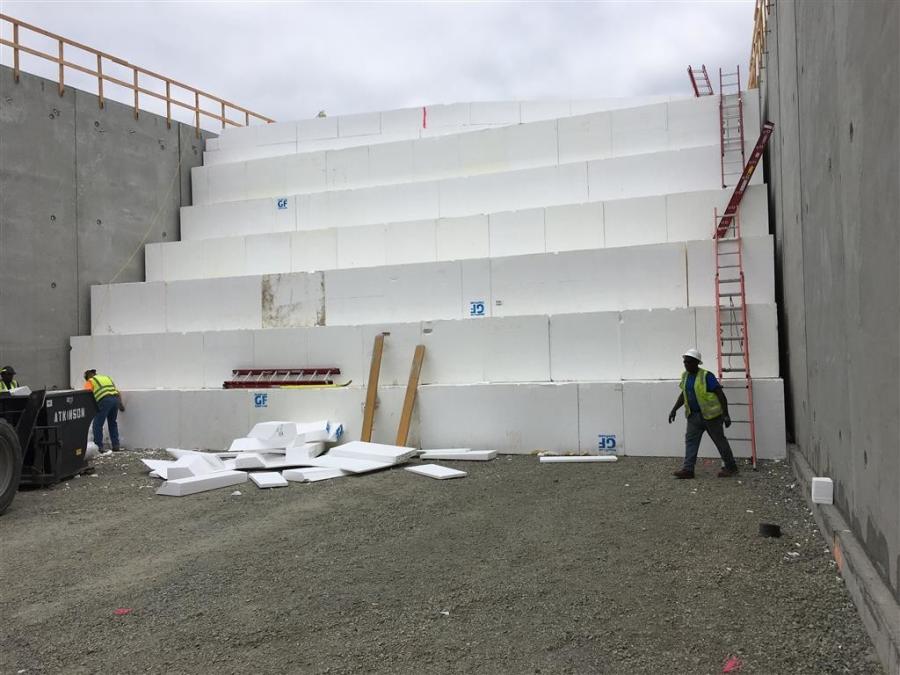 Construction crews worked with a variety of cranes to set bridge girders over twelve spans. This is about the tenth project in which WSDOT utilized Geofoam. The state opted to use the product on the southbound ramp because soils in the area are poor.

“Geofoam is used in a variety of applications, usually used in applications where the existing soils are not of good quality,” McNabb said. “It is used particularly around Seattle where you have really old utilities in the ground that are still working and there are concerns, for instance, about a pipe break. On both sides of the roadway there are adjacent wetlands. Most of the area there is standing water out there on either side of the highway. Once you get below the roadbed the soils are not good for structural construction. They use geofoam in lieu of other methods.”

Other methods can add time and thus, money to projects.

“Construction-wise, there are a lot of ways to improve the soil or build foundations into the poor soil,” he said. “You can do surcharging where you pile a bunch of dirt on bad soil and you monitor it 'til all the settlement is out. Those other methods take months. If you want to surcharge it, that takes months. Or you can go in and do ground improvements, pinpiles [small concrete piles]. There are a variety of methods to make the foundation firmer.” 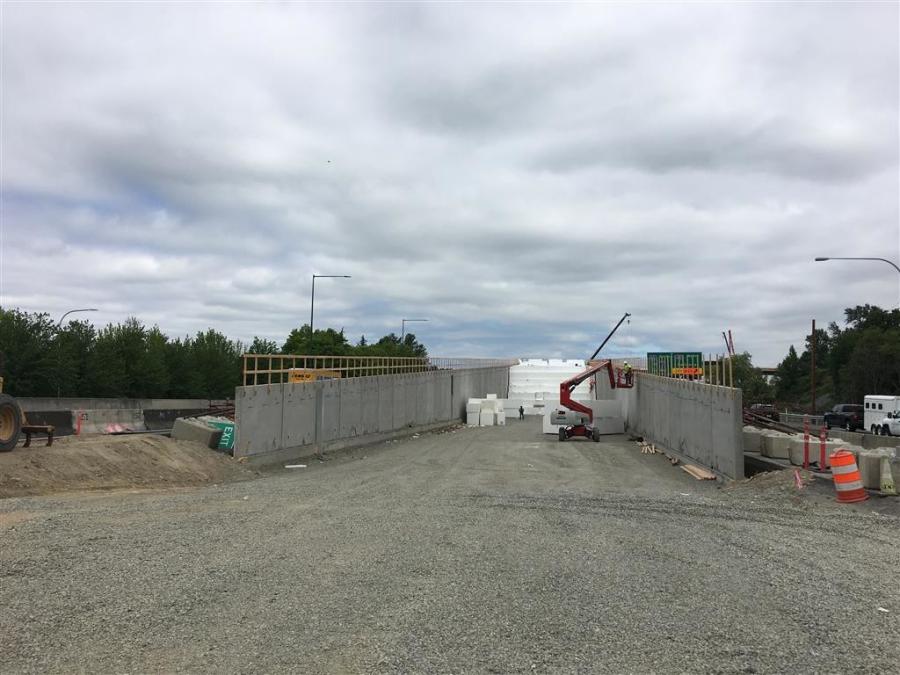 Geofoam, however, has distinct advantages. It allows workers to build on the poor soil with only minimal preparation. In this case, they put in and graded a layer of crushed rock. It's lightweight — 100 times lighter than the equivalent volume of dirt if compacted — with each 4 by 4 by12-ft. block weighing only 248 lbs. That means it can be trucked in, moved to the specific site by forklift and maneuvered into place by just two workers. Approximately 2,841 blocks or 20,205 cu. yds. of material were used to build the foundation.

“They can move them around and place them pretty easily,” McNabb said. “They are stacked in there and an adhesive is used to bind them together like a big block puzzle, forming a big wedge shape underneath the roadway. You've got walls on either side, ramping up from zero to approximately 40 ft. and that big cavity between the two walls is where the geofoam is. That took quite a wall. It's a big ramp. They spent a couple of months placing this geofoam, placing it and building it up.”

Geofoam is a construction-grade Styrofoam which essentially disintegrates when it comes into contact with any kind of fuel. To protect it, the blocks are capped with concrete and a waterproof membrane. The roadway goes over that.

“The Geofoam allows us to get the facility open to the public earlier,” McNabb said. “It's a huge advantage for us as a public agency and also just for the ease of construction and saving of time.”