The spirit of Star Wars is taking form in a huge $1.5 billion spacecraft-like structure called the George Lucas Museum of Narrative Art in Exposition Park in Los Angeles.

The futuristic museum building is even being built using highly modern equipment, including robots and drones. Robots will do some heavy lifting and moving of materials and drones provide a better picture of the construction process.

The drones can provide improved surveying of the land for starters.

With excavation completed, the project has moved into its major construction phases. Although much work remains, walls can be seen now inside the structure. The walls separate two different theaters. 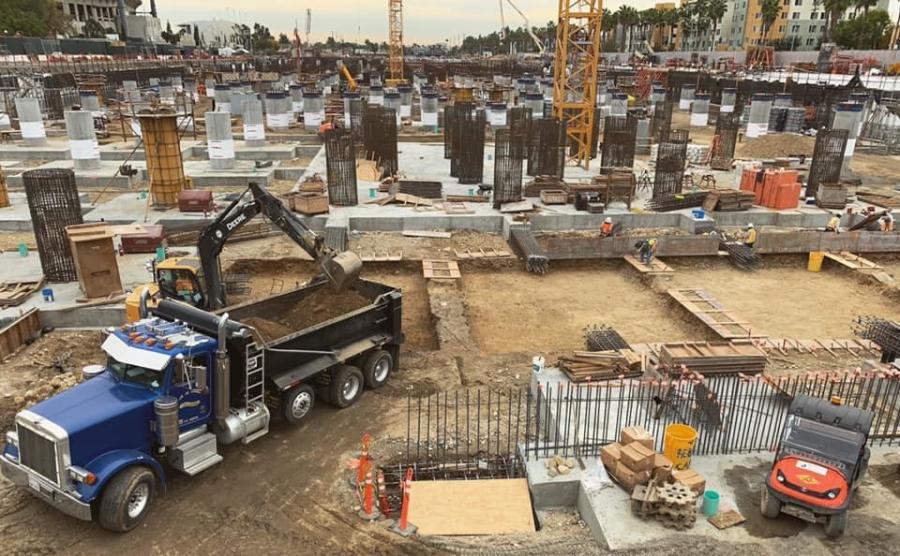 Los Angeles Mayor Eric Garcetti said during a recent visit to the construction site that beyond the museum's legacy, the building will be a symbol of LA's resurgence and economic viability.

"This represents a more than $1 billion investment in Los Angeles, Garcetti said.

Garcetti has described the museum as an architectural wonder, a cultural treasure and a center of storytelling and creativity at the heart of a reimagined Exposition Park.

Lucas is using the power, creativity and magic of modern-day construction to bring the best of his works, including the Star Wars and Indiana Jones franchises, to a scholarly, but fantasy-filled public museum.

Crews broke ground on the project in March of 2018. The Lucas Museum was previously proposed for Chicago — and before that, San Francisco — before finally coming to LA. 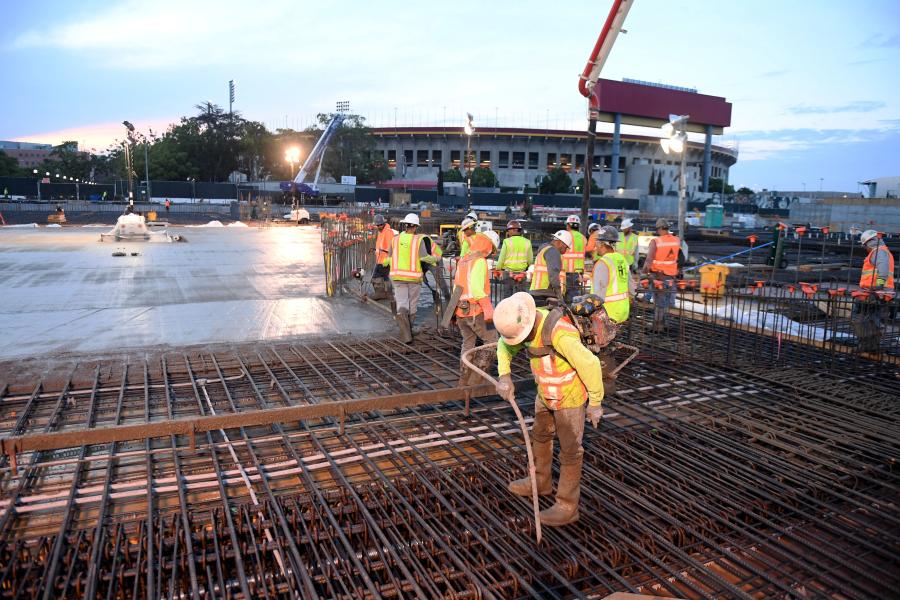 Designed by Beijing, China-based MAD Architects, the 290,000 sq.-ft. futuristic-looking museum will be divided into two wings and contain more than 125,000 sq. ft. of gallery and exhibition space, plus classrooms, a library, two movie theaters, vast lobby, an eatery, and a public rooftop garden. The property will include 11 new acres of park and garden space.

The museum parking lot will have 2,200 spaces.

With construction completion slated for late 2021, the doors of the museum should open to the public in 2022.

The five-level museum is taking form on land occupied now by two parking lots, just west of the Natural History Museum of Los Angeles and the Los Angeles Memorial Coliseum.

In addition to hiring local workers, the Lucas Museum has shown commitment to increasing the pipeline of small businesses and businesses owned by women, minorities, and veterans for consideration at various levels of construction and professional services.

To reach these ambitious goals, the museum and contractor Hathaway Dinwiddie have hosted and participated in community construction outreach events in partnership with Councilmember Price's Office.

Museum to Focus on All Media Forms

The focus of the museum will be on "the power of storytelling across all media, including paintings, illustrations and moving images," and it will display items from Lucas's own collection including fine and popular art, a mix that includes the original Darth Vader mask and other "Star Wars" ephemera along with Norman Rockwell paintings.

When the venue opens visitors will see permanent and rotating exhibitions featuring illustrations, paintings, comic art, photography and, of course, an in-depth look at the art of filmmaking.

The Lucas family provided a gift of more than $1 billion for the museum's construction, endowment and collection. All construction costs are being covered by the Lucas Family — no taxpayer dollars are being used.

The museum will be a sleek, spaceship-like building.

Narrative art is art that tells a story through images, either as a single moment in an ongoing story or as a sequence of events unfolding over time. It is as old as humanity, with many of the world's great works of art being narrative in nature, conveying stories from religion, myth, legend, history, literature or current events.

The project will have a fifth-floor terrace with a meadow of native plants. That location will be based on California's geological features, according to landscape architect Mia Lehrer, whose firm will design that part of the project. The surrounding acreage will play with elevation and try to tell a story about California's natural development, she said.

Once open, the museum will have daily movie screenings in its two theaters. The educational component, housed in the southern wing of the building, will include a public library and digital classes. Lessons and lectures also will be held in the museum.

Lucas views the museum as filling a cultural niche.

Multiple Cranes to Be Used

The cranes are described as of normal size for the size of the project. Heavy equipment includes dozers, backhoes, delivery trucks, cement mixers, asphalt trucks, water trucks, forklifts and drills.

The number of workers on duty daily will depend on the day and the phase of construction. The contractor expects a peak of approximately 600 workers and most will be working shifts.

The asphalt removed from the parking lots for construction of the museum will be recycled.

The museum is a major, private not-for-profit investment to benefit South Los Angeles and surrounding communities.

Museum officials asked the Los Angeles Economic Development Corporation to do an analysis on the economic impact of the museum — during construction. The corporation estimated that more than 6,000 total jobs, direct, indirect and inducted, will result from the project. 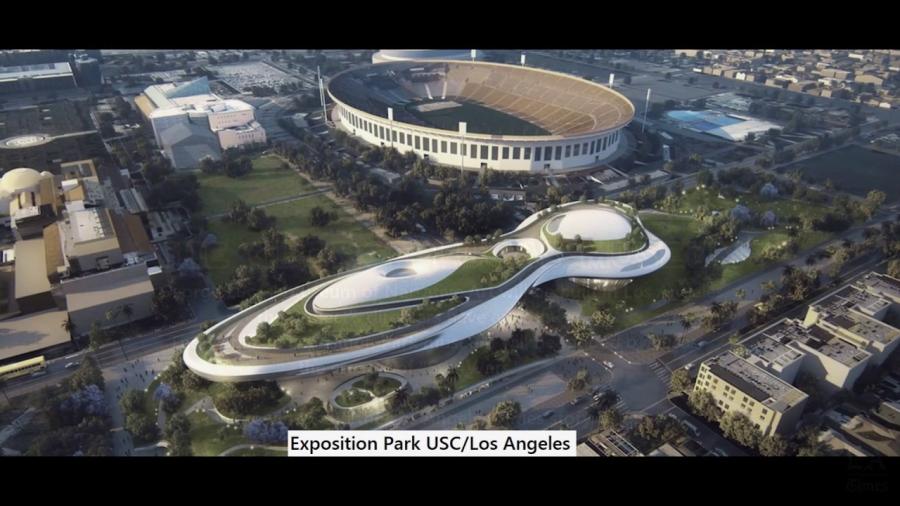 In addition, the Lucas museum has committed to providing construction contracting opportunities to diverse businesses.

Entrance to the Academy Museum of Motion Pictures on Wilshire Boulevard will be free to everyone under the age of 18, due to the George Lucas Family Foundation and their sizeable donation, museum officials announced recently.

The Academy Museum of Motion Pictures is across town from the Lucas Museum of Narrative Art. The building is nearing completion.

The Academy of Motion Picture Arts $300 million Renzo Piano-designed museum being built in the former May Company building at the corner of Wilshire and Fairfax in the city's Miracle Mile area.

Designed by Pritzker Prize-winning architect Renzo Piano with Renzo Piano Building Workshop, the 300,000 sq.-ft. project consists of a major renovation and expansion to the 1939 Streamline Moderne May Company Building, which is now the Saban Building.

The organization has undertaken an aggressive fundraising drive to build the museum. 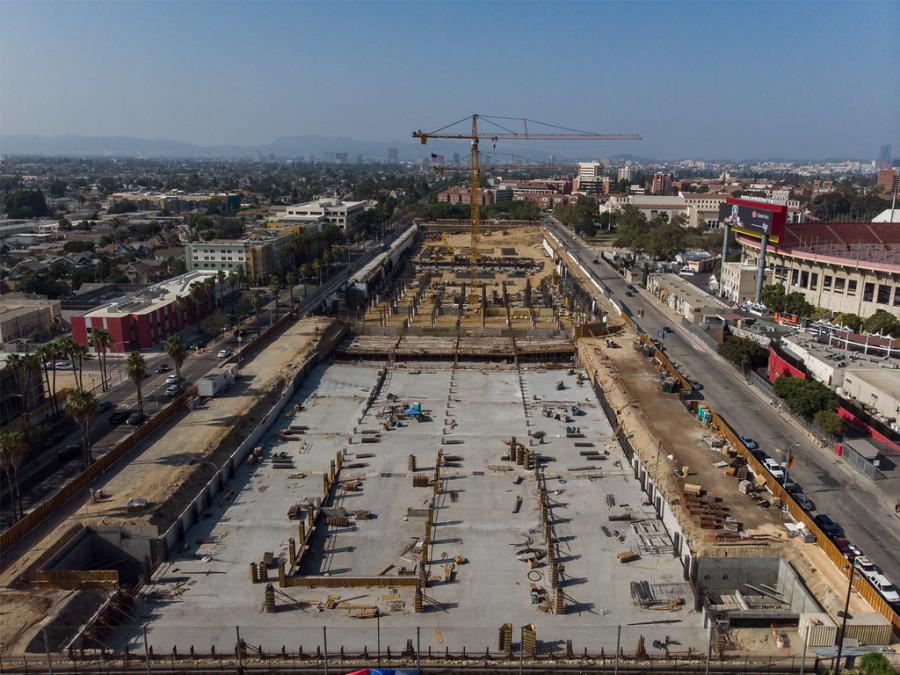 The exact amount of the gift to the Academy Museum of Motion Pictures was not released, but it was described as a "transformative grant" in support of the museum's "educational mission." It will provide free admission "in perpetuity" for all visitors age 17 and under, according to the Academy.

"At the Academy Museum, we are committed to helping educate our youngest visitors, the children and teens who will be the next generation of filmmakers, writers and visual artists," museum director Kerry Brougher said in a statement.

"To succeed, though, we must break down the financial barriers that make it difficult for families, students and teens to visit cultural institutions. We are deeply grateful to the George Lucas Family Foundation for understanding our mission so well and making it possible for us to waive admission for our youngest audiences so they can engage with exhibitions and programs that will nurture their creativity and encourage them to tell their own stories," Brougher said.

The donation from the famed "Star Wars" director's foundation was made in honor of Sid Ganis, the vice president of the Academy Board of Governors and chairman of its museum committee.

Interim President of the Lucas Museum

John McCarter has extensive experience in the museum arena. He currently serves on the Smithsonian Institution's Board of Regents. From 2015 to 2018, he served as chair and was responsible for overseeing the Smithsonian's 19 museums.

McCarter is an emeritus trustee of the University of Chicago, former trustee of Princeton University and a former member of the board of the Argonne National Laboratory.

He is a fellow of the American Academy of Arts and Sciences. CEG