Aerial view of concrete being poured and paved at the newly-renovated Dunedin Stadium.

Dunedin, Fla., has been the Spring Training home of the Toronto Blue Jays since 1977, and the bond between the city and team was renewed on April 23 when construction began on the $102 million ($96.6 million in construction costs) renovation of the stadium where the Jays play their Grapefruit League games. The project also calls for the expansion of the Player Development Complex, which, like Dunedin Stadium, is shared by the franchise's local minor league affiliate.

A lease agreement, signed in November 2017 between the Blue Jays, the city of Dunedin, Pinellas County and the state of Florida, has Dunedin Stadium serving as the spring training center for the big-league club and home for the Dunedin Blue Jays for the next 25 years. The new ballpark, whose construction is being managed by a joint venture between Gilbane Building Company and Turner Construction Company, is slated to open in time for the 2020 Spring Training season. 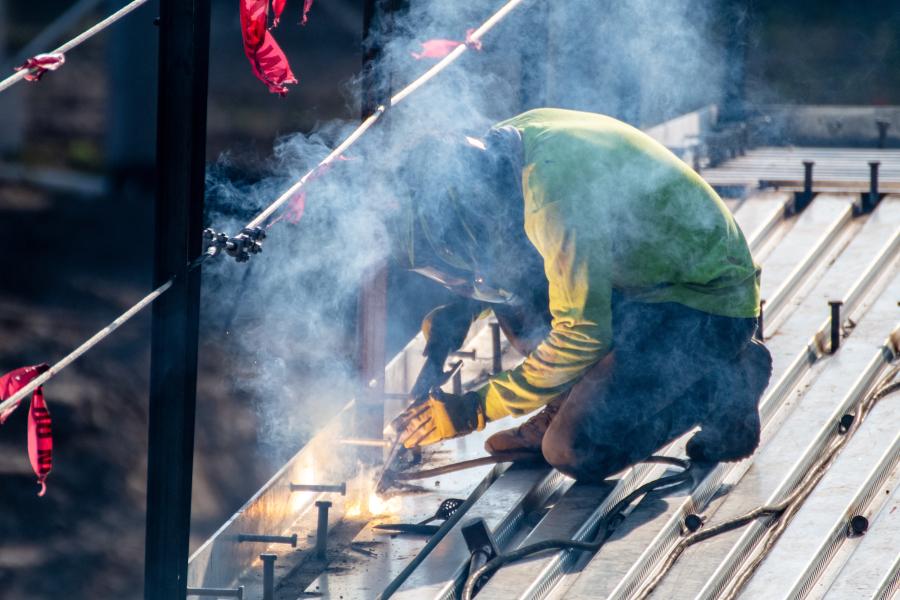 More than 300 construction workers at both sites are erecting new buildings and creating new playing fields.

Seating at the ballpark will increase from 5,500 to 8,500, and it will feature a boardwalk that wraps around the entire outfield to allow for 360-degree access around the stadium, as well as a large group section in the right field corner to give a ground level view from the outfield. Other amenities include new bars down the third base line, as well as on the new boardwalk in right field; a kids zone in the concourse along the left field side; renovated bathrooms, concessions and suites; a new Jays Shop, Jr. Jays Zone and BBQ tent; additional air-conditioning for the bar along third base line and an outdoor bar in right field; and adding special groups areas and a new scoreboard.

The Player Development Complex is also being upgraded and tripled in size. When finished, it will include three new full fields for a total of six (one with synthetic turf), five-bay and seven-bay batting cages, two 10-pack gang mounds and a new half-field. The new two-story clubhouse/administration building (110,000 sq. ft.) will have amenities that include a 10,000 sq. ft. weight room; eight locker rooms, two dining rooms and two training rooms; three sports labs, two fuel bars, a movement studio and a barber; a variable depth pool, plunge pools and sauna; a classroom and large conference rooms, several huddle rooms and call rooms; all of the administration offices; and staff collaboration spaces.

Discussions between the city and the Blue Jays began in September 2014, and the success of the negotiations was important for the local economy as it is estimated that the stadium and training complex generate $80.3 million in economic benefits annually.

"The Blue Jays have a strong relationship with the community of Dunedin going back to 1977 when the team first came to Florida," said Shelby Nelson, the Blue Jays' director of Florida operations. "The relationship has continued to grow over the years, and as an organization we are excited to extend this connection with Dunedin for many years to come. Our community is enthusiastic about the opening of the new ballpark, and we look forward to sharing in the joy with our fans. The Blue Jays are proud of their long-standing relationship with the city of Dunedin and Pinellas County. We are the only team in Major League Baseball to have one Spring Training home since 1977. It was important to us to stay in Dunedin and continue to grow in the community."

The ballpark and training center were designed by Populous.

"We believe our fans are really going to enjoy all the new amenities around our ballpark," Nelson said. "After all of our renovations, we feel we have been able to keep the intimate charm that fans have enjoyed about our ballpark." 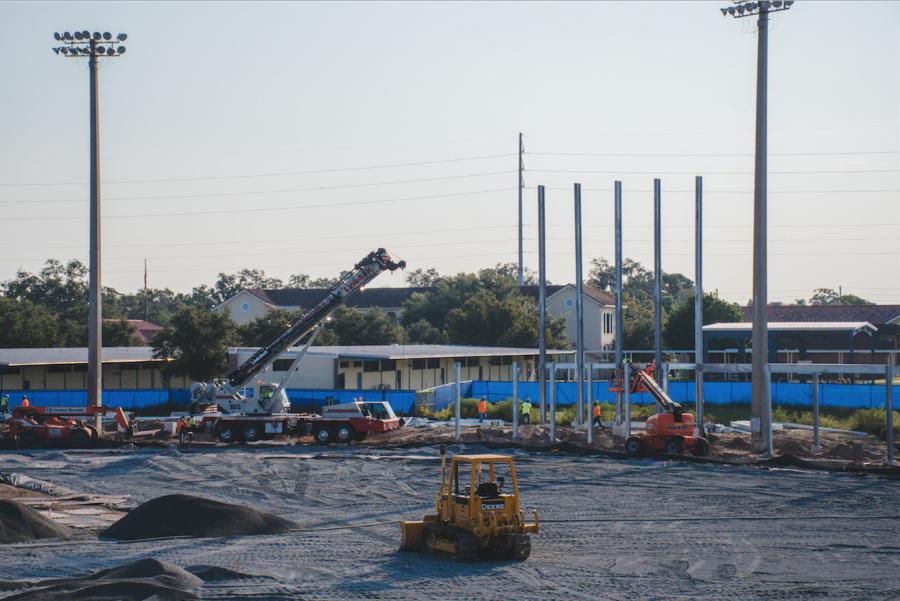 A look at the variety of machines brought in to work on the Blue Jays' $102M Spring Training complex.

To deliver the project, Gilbane, which is not self-performing any work, has brought in many general contractor and subcontractors. Major Contractors for the Player Development Complex (PDC) are Crisdel for sitework, APG for electrical, Randall Mechanical for plumbing and fire sprinkler, B & I for mechanical, OLP for concrete, Masonry Builders for masonry, Harrell for pre-engineered metal buildings, Raynor for framing and drywall, Countryside for glass and glazing, Sutter for roofing and Brightviews for the playing fields.

Major Contractors for the stadium are Kimmins for sitework, Pelican for electrical, Sprinklermatic for fire sprinklers, BCH for mechanical and plumbing, Baker for concrete, Richard A. Souder for masonry, Harrell for pre-engineered metal buildings, Raynor for framing and drywall, Crawford Tracey for glass and glazing, Meade for roofing and Brightviews for the playing field.

For the stadium, crews have completed all of the demolition; erected the pre-engineered metal building; built the new concessions and restrooms; removed the old seating and railings and are prepping the area for the new seating; started installing the steel and will soon start installing the sod for the field; started work on the 360-degree concourse deck; and poured the foundations and erected the steel for the new scoreboard. 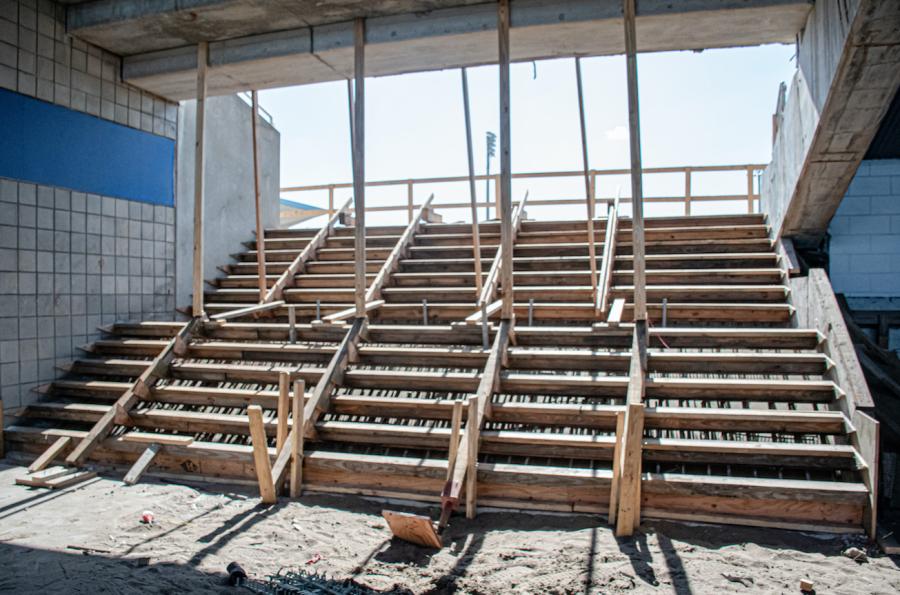 A lease agreement signed in November 2017 has Dunedin Stadium serving as the spring training center for the big-league club and home for the Dunedin Blue Jays for the next 25 years.

For the Player Development Complex, the masonry is nearing the top-out elevation and steel erection has begun; the metal decking for the first elevated deck in Area A has been installed and is awaiting the concrete pour; the four plunge pools for the hydrotherapy area have been set; and the chillers have been set.

"We are working on all of the out buildings, including the demolition and renovation of the existing maintenance building where the old batting tunnels were housed," said Heath Bruns, Gilbane's senior project executive. "When completed, this area will become new office space, locker rooms and storage for the groundskeepers."

Sodding for Major League field will soon begin and work on the half-field has also started. For ML field four, the roof has been installed. All of the fencing around the field, backstops and batter's eye will soon be going in, as will the fence fabric on field one.

"The schedule is our biggest hurdle — we're always fighting time," Bruns said. "You are working through a finite timeframe based on when spring training ended to when we could start the demolition and construction. There's been some rain that has slowed progress and Hurricane Dorian. With such a large site at the Player Development Complex it is crucial to get the storm system completed and tied into the ponds to assist with controlling rainwater. 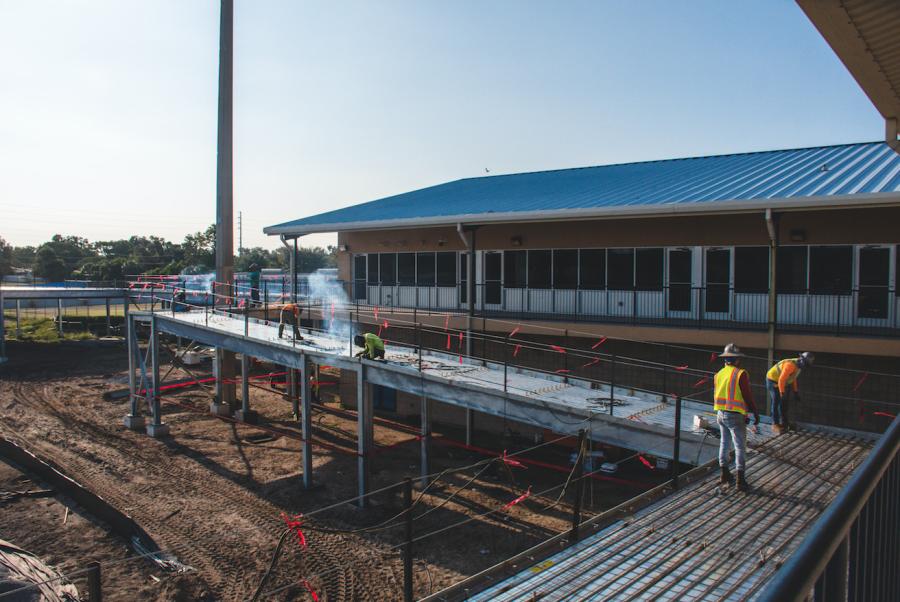 The project also calls for the expansion of the team's Player Development Complex, which, like Dunedin Stadium, is shared by the Jays' local minor league affiliate

"The stadium site is tight and we have minimal laydown area. Nearly all parking for the workers is offsite both of which complicate the logistics of construction," he added. "We have an office on-site and the trade contractors have brought in storage containers to store material."

Both sites are located between schools and residential areas, which restricts early morning and night work operations. Due to the weather in Florida, Gilbane prefers to start concrete pours in the early morning hours to miss the prevalent afternoon showers. Weekdays have shifts going from 7 a.m. to 7 p.m. and Saturday crews can work from 8 a.m. to 5 p.m.

Relations between the construction team and the Blue Jays are excellent.

"We have a standing owner/architect/contractor meeting for both projects where we address and discuss any hot items — requests for information, submittals, mock-ups and other challenges that we're working through," Bruns explained. The city is also involved in these discussions."

The stadium upgrade began with the demolition operations.

"We cut all utilities to the stadium and then installed all the new ones so that we wouldn't hit any during the demolition," Bruns said. "We worked with Duke Energy and the city for all the new connections — sanitary sewer, potable water, fire line and electrical distribution. The challenge for the new construction is the restrictions on work hours. We would like longer work hours during the week and for weekends. However, we are not going to do anything that impacts the neighbors on weekends."

Work on the Player Development Complex clubhouse/administration building is under way.

"The foundations are all poured and the walls are up to various areas of the second floor," Bruns said. "The biggest challenge is that we make sure that the building is enclosed so we can start work on the interior elements. Pending any schedule hurtles with exterior elements, we will temporarily enclose the building as necessary to keep work progressing on the interiors." 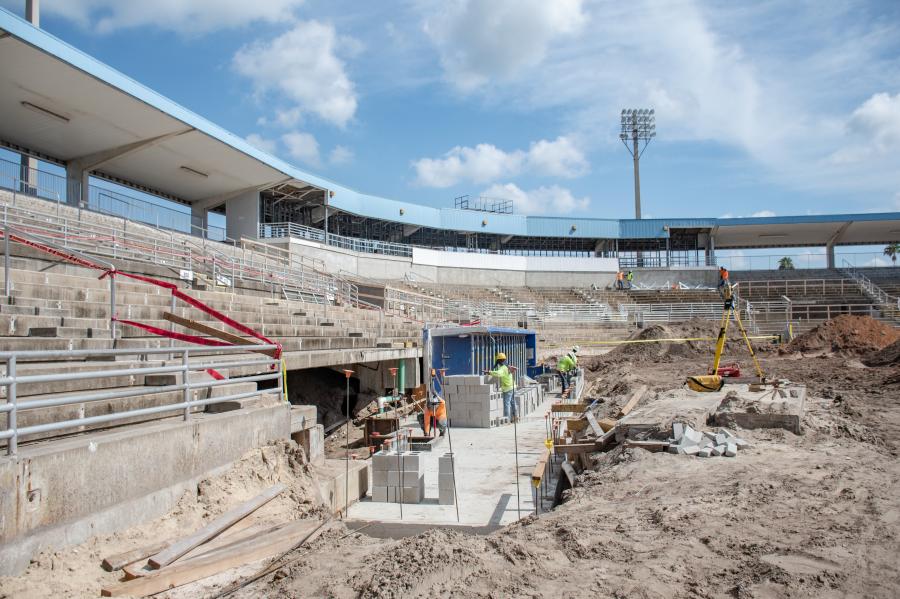 As crews work on erecting the stadium's dugout, pictured is a good look at some of the 21,000 cu. yds. of earth imported for the project.

To create the three new fields and the half-field, site prep occurred on several hectares.

"The fields are very important, and the stakeholder teams review the progress weekly," Bruns said. "Consultants are sent out to ensure everything is installed per the specifications and we survey the progression of the fields to ensure we are installed correctly and submit that information. We imported roughly 21,000 cu. yds. of earth for the project."

The original site housed a dog park, handball courts and baseball fields which were demolished. New drainage systems, including both wet and dry ponds, have been installed to handle storm water.

Much of the equipment is owned by the trade contractors, but some of it is rented from companies such Sunbelt Rentals, Herc Rentals, United Rentals and Sims Crane. CEG