The Golden Driller spent a lifetime on construction sites, does not smile for photos and was forced to retire from the rodeo at age 74 after breaking his back in competition. 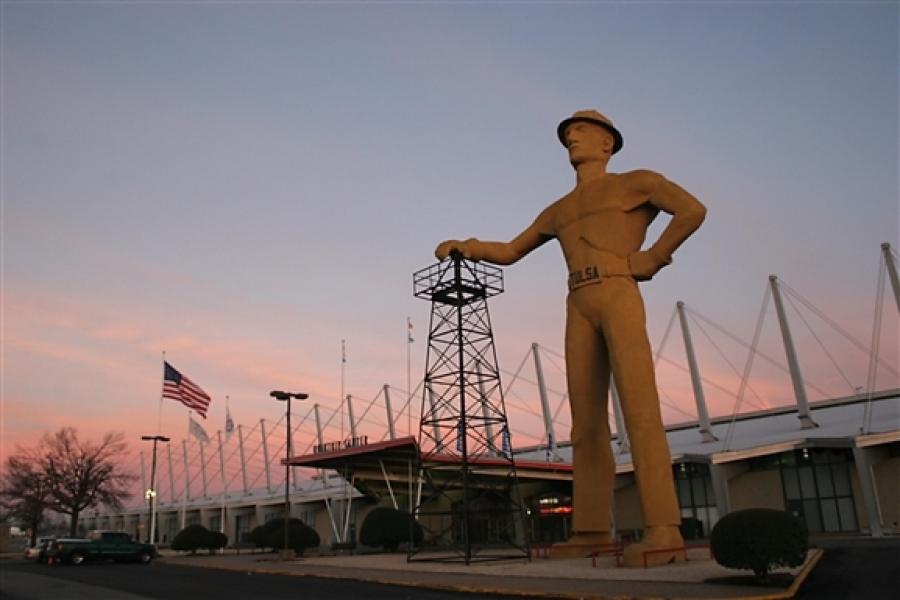 TULSA, Okla. (AP) The Golden Driller spent a lifetime on construction sites, does not smile for photos and was forced to retire from the rodeo at age 74 after breaking his back in competition.

And he did wear pants, the Tulsa World reports. No, the pants were not skin tight.

He's a real guy. Or, at least, a real guy who posed for artists while they created Tulsa's most recognizable landmark.

The Golden Driller turns 50 this year. A party was thrown last weekend at the fairgrounds, the statue's residence since 1966, to celebrate.

John Stephens, 79, recalls the project from sketching to installation. He was an unwitting model and oversaw the statue's construction. Surrounded by photos from that time and a complimentary cast-iron miniature, he downplays his role.

“I had no clue what it was to be. It was just another project in a long list of projects over the years,” he said. “There is really nothing special about me.”

The chosen one: When the International Petroleum Exposition came to Tulsa in 1966, Stephens was the superintendent working for Dallas Meade Constructors.

At two previous expos, temporary driller statues had been created. For this one, the Mid-Continent Supply Co. of Fort Worth, Texas, donated a steel and fiberglass Golden Driller as a permanent symbol of the expo. It was an international oil industry trade show when Tulsa was known as the “Oil Capital of the World.” The Golden Driller's right arm rests on an actual derrick taken from an oil field near Seminole.

One day, the owner called Stephens into the office. When he arrived wearing his hardhat and boots, he was asked to stand next to a small oil rig replica. Artist George S. “Grecco” Hondronastas and another artist, who went only by “Adrian,” were there, he said.

“They started sketching,” he said. “They didn't take my measurements. They would tell me to hold still a minute and things like that. It's not really me there but a figure.”

That's not how his family and friends have viewed it. His co-workers had particular fun asking about the too-tight, seemingly nonexistent pants.

“Oh, I've had to deal with that for years,” he laughs.

Stephens has no idea why he was chosen. It could be he was on site every day, making it easier for the artists to refer to their muse. Maybe he had that hardened cowboy look. Or that he was simply available that day.

“It's not me. It's a figment of George's and Adrian's imaginations. I was there doing the best I could,” he said.

One trait shared between Stephens and the Golden Driller: a neutral, almost stern, face.

“You know, there are hardly any photos of me smiling anywhere,” he said. “When I'd luck out, win at a rodeo and have my picture in a magazine, my brothers would say, 'Why do you look so serious all the time in front of photographers?' It's just the way I am, I guess.”

Coming to life: Once the sketches and planning were done, the Golden Driller assembly started. Stephens was the coordinator and there at each stage. Photos show him standing in front of a skeleton of a hand, a metal outline of the hat and a still-to-be connected foot.

“It was totally different than anything I'd done,” he said.

The artists would draw a section in chalk on the pavement. Workers would put rebar on top and twist the pieces with heat and muscle to fit the drawings. Then, like a puzzle, it would fit together as the statue came to life.

“Adrian and George had a talent and special eye for that,” he said. “They could look at a piece of metal the size of your finger and know exactly how it should be bent.”

The Golden Driller fell into disrepair by the '70s. In 1976, the big man needed $50,000 in repairs, but the Mid-Continent Supply Co. declined to pay the bill. It was going to be demolished before it fell down.

A community-wide campaign raised the money, and the statue was refurbished in 1979. That's when the belt buckle was changed to “TULSA” from “Mid-Continent.” A waterproof finish was applied in 2011.

“My heart almost broke when I drove by one time and saw it was in such bad shape,” Stephens said. “It hurt me to see that. That is as emotional as I could get.”

Life before, after Driller: Stephens is as rugged as any wildcatter.

A native of Sapulpa, he entered the Navy at age 19, serving four years. After his discharge, he married Evelyn in 1959 and they went to California for a welding job. The couple recently celebrated their 57th wedding anniversary.

At one point Stephens worked temporarily in the Texas oil fields, but went back into construction. They returned to Tulsa in 1963 and raised two daughters and a son. They have six grandchildren and two great-grandchildren.

He retired from construction in 1996 as the superintendent and project manager for the Bank of Oklahoma.

Rodeo has been a lifelong pastime that he is having trouble giving up. In 2011, at age 74, he broke his back while competing in team roping at the Lazy E Arena in Guthrie.

“Doctors said I couldn't do it anymore. I'm having a hard time with that,” he said.

Bragging rights: The Golden Driller has become the symbol for Tulsa. It's a must-have stop for selfies. It's in every video footage about the city. It's in pop culture.

For Stephens, it's more.

“What the Golden Driller represents to me — what he was always meant to represent — were all of the tough, hard hours and days those oil roughnecks did to produce oil to make our way of life easier for all of us,” he said. “Those guys were out there when it was sleeting and snowing.

“He's a reminder of all that blood, tears and death — a lot died on those rigs. The rigs aren't like how they are today.”

A half century after Stephens unsuspectingly became a model, his daughter is gratified by the statue's staying power.

“It's going to be there forever,” Spears said. “It's a staple. It's not going anywhere. My dad built it, so it's built to last.”